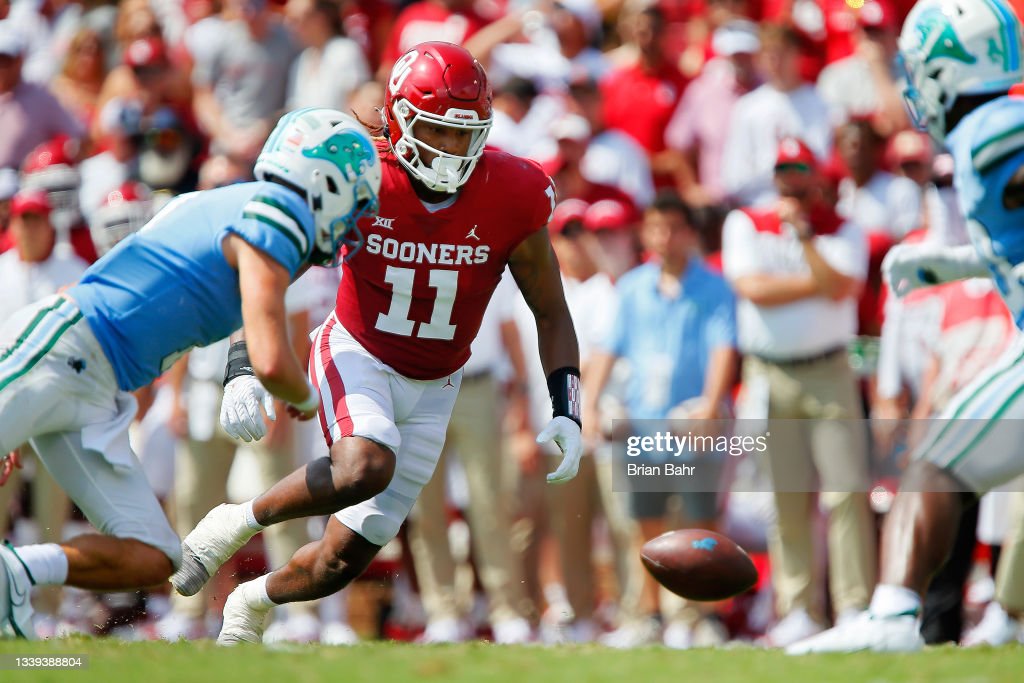 From now until the 2022 NFL Draft takes place, we hope to scout and create profiles for as many prospects as possible, examining their strengths, weaknesses, and what they can bring to an NFL franchise. These players could be potential top 10 picks, all the way down to Day 3 selections and priority undrafted free agents. Today, I’ll be profiling an edge rusher that was the headliner for a Big 12 powerhouse this past season, but questions remain as to whether he can make the transition to being a full-time player over a situational pass rusher at the next level.

— Has lined up at both edge and off-ball LB during his college career
— Has decent length and size for the position
— Noticeably added weight from his playing weight at OU to try and bulk up for the Combine and tested well at said weight
— Quick, twitchy pass rusher with an impressive get off (1.59 10) paired with the speed and explosiveness (35.5-inch vert) to chase down opposing QBs
— Used well as a spy when asked to mirror the QB to prevent him from escaping the pocket
— Well-utilized on twists and stunts to allow him to come through the interior gaps as a rush end or off-ball LB
— Has good closing speed in pursuit to run down ballcarriers and passers from behind
— Has a fair amount of balance and bend around the corner when he can beat the tackle with speed around the edge
— Wins primarily with speed off the edge, mostly using a dip/rip or two hand swipe combo as a pass rusher
— Has some exposure to dropping back into zone coverage
— Played special teams early in his career and make a notable impact in that area of his game

— Noticeably small and lean for a traditional edge defender
— Added weight for the pre-draft process, but will he be able to keep that weight on?
— Has very little power in his game from a pass rush or a run defense perspective
— Will get engulfed by size and strength in the run game both on the edge and when playing at the second level
— Has a tough time disengaging from blocks when his speed rush fails
— Only has one pitch in his pocket as a pure speed rusher who hasn’t yet learned to convert to power
— Inconsistent at maintaining outside contain on runs to the edge when playing as a standup edge defender
— Lacks the lower body and mass to stay upright after a strong punch lands from the offensive lineman
— Gets plenty of pressures, but needs to flatten better or finish through contact more to convert pressures into sacks
— Motor can run hot-and-cold at times as a rusher as well as a run defender
— Wasn’t a full-time player at OU, often getting subbed out for bigger, stronger bodies on early downs and short yardage situations

— Redshirt Junior prospect from Fort Lauderdale, FL
— Born September 26, 1999 (age 22)
— Four-star recruit and named an Under Armour All-American coming out of high school from powerhouse St. Thomas Aquinas
— Redshirted his first season after he played in three games and made three total tackles
— Played in all 14 games and started each of final eight contests in 2019 and registered 43 total tackles (25 solo), 6.5 tackles for loss, 3.5 sacks, an interception and four pass breakups; had six tackles on special teams coverage units
— Started all 10 games in which he played in 2020 and totaled 32 tackles (18 solo), with 10.5 tackles for loss, eight sacks, two pass breakups, and a team-high 10 QB hurries
— Started all 12 games of regular season in 2021 and posted 39 tackles (23 solo), seven sacks 15 tackles for loss, three fumble recoveries, one forced fumble, one pass breakup and nine QB hurries
— Appeared in 39 games in his college career with 29 starts
— Opted out of the team’s bowl game to begin preparing for the 2022 NFL Draft
— First-team PFF and second-team AP All-American (2020), Coaches and AP All-Big 12 Second Team selection (2021)
— Communications major, All-Academic Big 12 Second Team in 2020

Nik Bonitto came out of powerhouse St. Thomas Aquinas in Florida as the next high-level defensive recruit who had his choice of any school to go to. In the end he decided to roll with the Sooners and after redshirting initially his first season on campus, he went on to have a productive three seasons in Norman before declaring early for the NFL Draft. When you watch Bonitto, you see a pure speed rusher that has positional versatility, having lined up both on the edge and in the box as an off-ball linebacker. He wins with speed and quickness in both spots as you can see from this complication of plays against Kansas this past season.

Bonito is an explosive player, possessing a great get off on the snap of the football and accelerates into the backfield quickly as evidenced by his 1.59 10yd split during his 40-yard dash at the NFL Combine. We see that explosive get off on this rep against Nebraska as Bonitto takes off like a sprinter out of his two-point stance, rounding the corner around the RT and gets into the pocket where #2 Adrian Martinez just evades the pressure from Bonitto and throws the ball toward the right sideline. Bonitto doesn’t finish the play here, but he does cause the pressure and gets Martinez out of the pocket.

Bonitto wins with pure speed around the corner as an edge rusher, having the bend and body control to flatten around the tackle into the pocket to get to the passer. Watch this rep against Oklahoma State where Bonitto swipes down the LT’s hands and dips his shoulder as he bends and flattens to the QB around the arc and manages to knock the ball out of his hand for the strip sack that the offense falls on.

Along with rushing off the edge, Bonitto has played a fair amount as an off-ball linebacker that can drop into coverage, play as a chase linebacker against the run, and play the role as a spy on the QB. Here against the Cornhuskers, we see Bonitto spy Martinez and rush the passer once he sees daylight up the middle, laying a nice shot on him as he lets go of the pass to force the incompletion.

Here is another rep from the same game where Bonitto is asked to spy Martinez from the rush linebacker spot on the edge, seeing him getting flushed from the pocket to the right sideline and runs him down to escort him out of bounds for the TFL.

Bonitto does a good job getting skinny and shooting through blocks, not only as a blitzer coming up the middle and on twists, but also in run defense. Check out this play where Bonitto sneaks through as the entire OL climbs to the next level, leaving Bonitto unblocked to make a play in the backfield.

Bonitto not only is a fluid mover in a straight line and around the corner, but also laterally, being able to quickly change direction and work down the LOS as both a spy as well as when asked to play outside contain. We see the latter here against TCU where Bonitto manages to keep his outside leg and arm free and strong out the run to the sideline and bring down the runner for a loss of yardage behind the LOS.

However, Bonitto lacks ideal play strength and power at the point of attack and will often get engulfed by size and strength of larger offensive linemen who get a hold of him, thus causing him to fail in run defense. Here is one example in the same game where the RT gets on top of Bonitto on the edge, turning him towards the middle and seals off the edge for the runner to pick up a nice gain.

Here’s another example against the Horned Frogs where Bonitto immediately gives ground on the snap of the ball, coming of the LOS into the box and gets picked up by the OL climbing to the second level where he gets latched onto by the blocker, but gets loose in the fray to pursue the runner. Still, we see Bonitto pull up near the end of the play instead of getting involved on the tackle attempt.

Here’s a similar example on a pass rush attempt by Bonitto coming off the edge against the LT who latches onto Bonitto’s chest and neutralizes his rush as Bonitto fails to get off the block. Bonitto runs off the block as the QB escapes the pocket up the middle, giving Bonitto a shot to make the play. However, he misses the diving tackle attempt as the QB rips off a nice gain with his legs up the middle of the field.

Overall, Nik Bonitto is a quick, twitchy edge rusher that brings some versatility where he lines up, having the experience and skill set to be a moveable chess piece around the defense that can rush the pass or spy the QB. He is skilled at shooting gaps and can use his speed and bend to win around the corner as a pass rusher. However, even though Bonitto came in heavier at the NFL Combine, he hasn’t shown any use of power in his game and doesn’t possess a reliable counter move to win when his speed rush fails. He also has been a liability as a run defender, often getting subbed out for other stouter defenders who hold their own at the point of attack.

When it comes to pro comparisons for Bonitto, one name that boasts a near identical frame and play style is Hasson Reddick who came out of Temple as a hybrid DE/LB who both played in the box as well as on the edge as a pass rusher. The Cardinals drafted him to play initially as an off-ball linebacker where he initially failed but resurrected his career the last two seasons as a productive pass rush artist as he has been used more on the edge or as a designated pass rusher from the box, allowing him to play to his strengths while masking his weaknesses.

Bonitto likely will play a similar role in the league as he won’t hold up as a full-time edge defender at the next level if his play against the run and adding more strength at the point of attack doesn’t improve. Defensive coordinators will have to be smart in how they deploy him in their scheme, but he does have the traits as a pass rusher to create pressure and get production from a variety of different spots. Should the Pittsburgh Steelers want a developmental #3 3-4 OLB who can come in as a situational pass rusher and a special teamer to start his career, Bonitto could be a guy they target is they think he can continue to develop behind Watt and Highsmith.