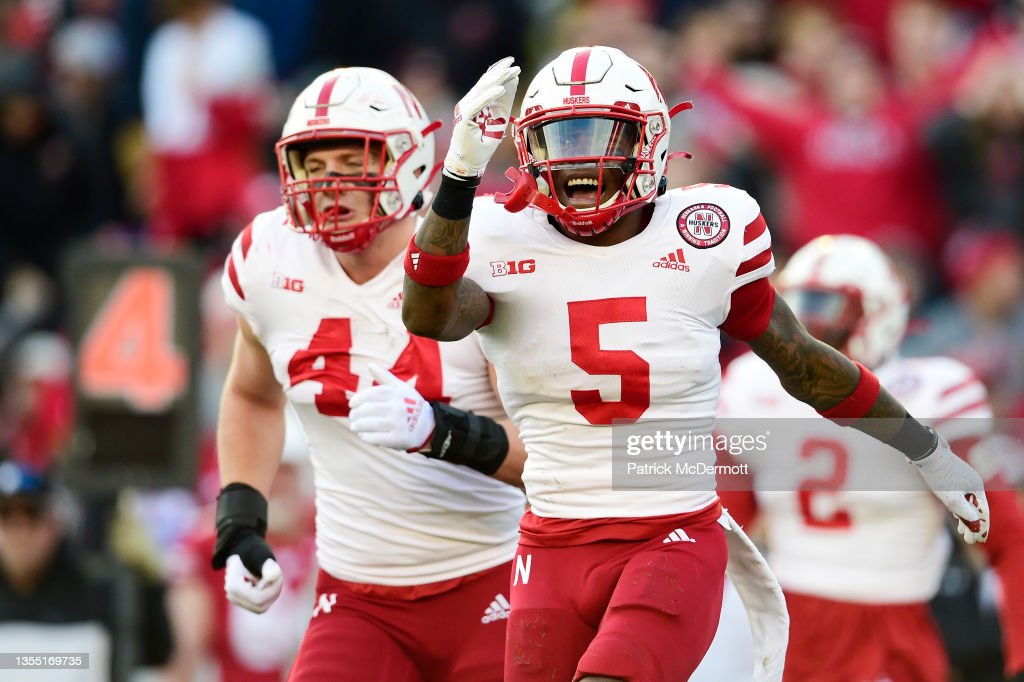 From now until the 2022 NFL Draft takes place, we hope to scout and create profiles for as many prospects as possible, examining their strengths, weaknesses, and what they can bring to an NFL franchise. These players could be potential top 10 picks, all the way down to Day 3 selections and priority undrafted free agents. Today, I’ll be profiling a cornerback prospect that dominated the Group of 5 level as a defensive back as well as a deadly return man that could be an immediate answer to a position of need for Pittsburgh.

— Has experience playing both cornerback and safety
— Is well-versed in playing press man, off-man, and dropping into zone coverages
— Possesses good straight-line speed (4.38 40) and explosiveness for the position
— Has the recovery speed to close ground and make a play on the ball if the receiver gets on top of him
— Has the movement skills to turn and run with receivers vertically down the field on the perimeter and in the slot
— Aggressive defender that harbors no ill-wills when it comes to playing in the run game
— Demeanor and physicality aid in his ability to play in run support and stick his face in the fan as a smaller defensive back
— Does well at fighting off blocks by other receivers on the perimeter to make noise on screen passes or in run defense
— Physical player when it comes to jamming opposing receivers at the LOS in press man
— Can stay with receivers over the middle of the field on deep overs and crossing routes

— Lacks ideal size and length to match up with bigger receivers consistently on the outside
— Needs to be more consistent as a wrap-up tackler rather than relying on arm tackles and body shots
— Takes bad angles of pursuit to the football as a tackler, putting him out of position to wrap up ballcarriers
— His eyes can deceive him sometimes as they stay trapped in the backfield rather than reading what is in-front of him
— Appears to have tightness in his hips as he will side shuffle/bail technique when dropping into coverage rather than committing to a straight backpedal
— Hip fluidity when opening up can be a tad labored, thus impacting his transition to running in-stride with receivers vertically
— High-cut defender that pops straight up almost constantly both against run and pass, causing him to lose leverage and be easily knocked off balance
— Struggles to drop his hips and change directions in space against shifty route runners

— Senior prospect from Montgomery, AL
— Born on Oct. 15, 1999 (age 22)
— A three-star recruit in the 2017 recruiting class that starred at QB in Alabama and was ranked as a top-60 ATH
— Volunteered his time with a Day of Service, Husker Heroes, Nebraska Football Road Race and local hospital visits
—  Played in 11 games as a true freshman where he contributed on both defense and special teams, totaling 12 tackles (nine solo), three pass breakups, and he also recovered a fumble
— Played in 11 of 12 games with 10 starts in 2019, missing the Purdue game due to illness. He started seven games at safety and three at cornerback, lining up at multiple positions to total 49 tackles (29 solo), four TFLs, 1.5 sacks, three interceptions (one returned for a TD), two pass breakups and four forced fumbles
— Played in eight games with seven starts in 2020 and totaled 28 tackles (23 solo) with three tackles for loss, four pass breakups and two interceptions along with six punts returned for 79 yards
— Got ejected in the Ohio State game in 2020, causing him to miss the first half of the Northwestern game
— Started all 12 games in 2021 where he recorded 51 tackles (35 solo), 3.0 tackles for loss, one sack, a career-high 11 pass breakups, one interception and one blocked kick
— Was a team captain in the 2020 and 2021 season
— Nebraska Scholar-Athlete Honor Roll (Fall 2020; Spring 2020, 2021), majoring in criminology and criminal justice
— Second team All-Big Ten in 2020 and 2021 (Coaches), honorable mention All-Big Ten in 2019

Cam Taylor-Britt initially tore up the gridiron as a dual-threat QB in the state of Alabama during his high school days before accepting a scholarship to play on the Black Shirts defense for Nebraska. Taylor-Britt played a little bit of safety and corner before finding a home on the outside his final two seasons, bringing a physical play style to the defensive back position. When you watch Taylor-Britt play, you see a well-built DB that has no issue coming up and laying the wood as a hitter in run support. Here is one example of him coming off his man against Michigan State to stick the QB who decides to scramble from the pocket, making him regret said decision.

Taylor-Britt’s physicality as a defender comes out in his play when asked to play press man at the LOS against receivers who are hoping to get a clean release. However, he also has the play speed to run in-stride with receivers in coverage as well like we see on this rep where he carries the receiver on the deep over route, staying right in the receiver’s back pocket across the field to discourage a target to come his way.

Taylor-Britt’s speed also comes into play when playing receivers vertically down the field, having the ability to recover if someone gets on top of him in order to make a play on the football. Here is a perfect example against #3 David Bell of Purdue where Bell gets a release on Taylor-Britt as he is slow to flip his hips but manages to catch up down the field and get the nice pass deflection as he elevates into the air to knock the ball down.

Here is another example from the game against the Wolverines where Taylor-Britt lines up in press man at the bottom of your screen and manages to open up and run with the receiver down the sideline, staying on his hip and keeps his hand on his side as the ball comes, turning his eyes to the ball and plays it in the air to knock down the pass.

Taylor-Britt also has good burst when triggering downhill in off-man or zone coverage when the ball is thrown underneath, being able to play through the receiver’s hands to force the incompletion or make the tackle. We see two good examples here where he breaks on the ball and knocks down the pass.

While Taylor-Britt has shown the ability to break on the ball in coverage, he also has notably tight hips in coverage as mentioned earlier, thus delaying his ability to change directions and click-and-close on receivers coming quickly out of their breaks. Here is one example against the Sooners where Taylor-Britt is playing a bail technique and turns over his shoulder when the receiver comes back to the ball, ending up being a step behind as he lays out to deflect the pass, but misses as the receiver comes down with the catch along the sideline.

Taylor-Britt’s lack of hip bend limits his ability to play low to the ground in a backpedal and make quick changes of direction, causing him to be slow laterally when adjusting to quicker route runners. Watch this easy completion to the Spartan WR where Taylor-Britt is playing high and upright, running straight down the line as the receiver runs the whip route toward the sideline for the catch and run to pick up the first down.

Another thing that sticks out from Taylor-Britt’s film is his poor angles to the football as a tackler. He often misjudges his pursuit angles which put him out of position to make a good form tackle, thus resulting in whiffs. Here is one example where he misses badly on the underneath pass completion where the receiver turns around and spins out of the diving attempt to pick up extra yardage.

Here is another example with the game on the line in overtime against the Spartans where Taylor-Britt has the ability to make the play on #9 Kenneth Walker III, but runs too far downhill, having to adjust as Walker comes through the hole and whiffs on the diving tackle attempt at the runner’s legs, allowing Walker to tote the rock into the red zone in scoring position to ice the game.

Overall, Cam Taylor-Britt is a well put together defensive back that has the bulk on his frame to be a physical presence both in coverage as well as in run support. He has good speed in the open field but lacks the requisite fluidity in his hips necessary to succeed at the next level as a cover corner. Combine that with his poor consistency as a tackler, and Britt likely will get exposed if asked to work on an island against refined route runners when asked to cover in man.

When I watch Taylor-Britt, M.J. Stewart who last played for the Cleveland Browns but recently signed with the Texans comes to mind as a former CB that was drafted in the second round by the Buccaneers but ended up getting cut due to his poor fit as an outside corner. He shares Taylor-Britt’s good size and physicality but lacked the fluidity to consistently hold up on the outside. He found a home as a safety/nickel corner hybrid for Cleveland, allowing him to play more toward his strengths while masking some of his weaknesses. Taylor-Britt would benefit from playing a similar role in the league where he can play the role of a box safety/heavy nickel defender as long as he cleans up his tackling.

The Pittsburgh Steelers could use a nickel defender that can play some safety, as they are looking for a physical nickel defender after the loss of Mike Hilton last offseason. However, Taylor-Britt’s tightness in coverage and inconsistencies as a tackler personally would make me hesitant to select him for a starting role as he needs time to develop into a more reliable defender in the secondary. He may become a viable starter down the road, but Taylor-Britt will have to clean up some key parts of his game and learn how to transition in coverage better to become more than a sub package defender and core special teams contributor at the next level.