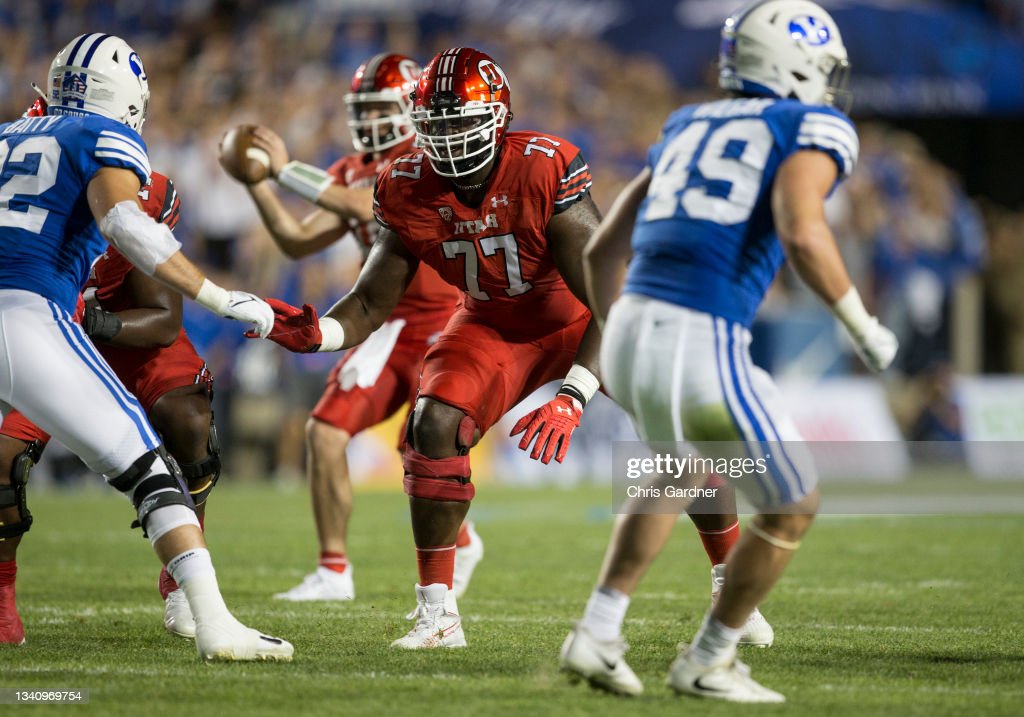 From now until the 2022 NFL Draft takes place, we hope to scout and create profiles for as many prospects as possible, examining their strengths, weaknesses, and what they can bring to an NFL franchise. These players could be potential top 10 picks, all the way down to Day 3 selections and priority undrafted free agents. Today, I’ll be profiling Utah left tackle Bamidele Olaseni, an intriguing developmental tackle who only has one year of starting experience at the collegiate level.

— Ideal size, arm length and movement skills to be tackle at NFL level
— Pops athleticism to move defenders at the second level and root out back side defensive ends
— Untapped power allows him to get great pop off line of scrimmage, shock defenders with his hands
— Recovery speed to run quicker EDGE rushers around quarterback and force them to run hoop
— Works well on double teams blocks, always finding work and plays with controlled violence
— Flashes of high level play including mixing up pass set techniques, jump sets, flash technique and more, impressive for one year starter

— Gives up soft edge too often, allowing pass rushers to win on high side
— Base, footwork needs to improve, narrows at the apex of pass rushes and narrows when blocking one on one situations
— Needs to merry hips with feet to take next step of development and show consistency at position
— Anchor needs to be more consistent, using his power to stay rooted into the ground.
— Only a one year starter who has just 12 games of starting under his belt

A player who I was exposed to at length at the 2022 East-West Shrine Game in Las Vegas, Utah left tackle Bamidele Olaseni has alluring traits, and it starts with his size and arm length. Measuring in at 6’7”, 348 pounds with 36 inch arms, the physical tools alone deserve a second, third and even fourth look when you consider how much the Steelers tackle play has struggled the last few seasons.

As mentioned above, Olaseni only has 12 career starts under his belt. If you were following these profiles last year, Jalen Mayfield, who ended up being selected by the Atlanta Falcons, had a similar sample size of games started. However, these two players are far from the same football player, and the tape shows that.

First rep that is highlighted from Olaseni (#77) is in the run game, where he combines on a double team block and drives his man 25 yards down field. The power he possesses in his lower body, and leg drive is impressive and this was the first play that blew me away while watching his film. His hand placement and overall base could be better, but moving a man against his will well downfield is enough to get you out of your seat.

The power in his initial punches are exactly what you would look for in an aggressive run blocking tackle. Olaseni, number 77 here, does a nice job of climbing, staying on his run blocking track and showcases his power but knocking the USC linebacker off of his feet, then looking for more work down the field. Olaseni plays with an edge, especially in the run game and isn’t afraid to finish any player on the field.

On this next play below, Olaseni gives up a soft edge and allows Drake Jackson to get hip to hip with him but his powerful hand shot allows him to reset his base and be ready for a counter spin move, which he handles beautifully. Because he was able to knock Jackson off of his track, Olaseni completely derails his pass rush and eliminates him from the play. Flashes of high level play here from Olaseni, and this was a game he was thrown into the middle of the second quarter because of an injury from the initial starting tackle.

There’s a reason Olaseni will be a developmental tackle though, however. In this particular rep against Kayvon Thibodeaux, a projected top five pick, Olaseni’s feet, base and hands are all sloppy, causing him to get knocked over on this rep. Olaseni’s feet die on contact, his base narrows and he has no power nor leverage on this rep. There weren’t many reps as bad as this one on his tape, but the lack of experience and breakdown on fundamentals caused this play to go wrong for him. His hand speed has to be quicker and he can’t allow his chest to be open like that.

Olaseni’s anchor is another aspect of his game that must improve. On this snap, instead of exploding out his set, he shuffles and it causes his feet to be too narrow upon contact, combined with high hands and high pad level. His initial hand strike is swiped away and the defensive end is able to get into his chest, controlling where he can move and he has no choice but to keep moving backwards. Olaseni has to learn how to counter moves like this, especially power rushes, and anchor himself when he’s in these types of situations.

There were improvements as he earned more game experience, though. Against Colorado, in a similar situation where his defender attempted to maneuver a speed to power move, Olaseni does a nice job sitting into his anchor, playing with a good base and pad level, allowing him to stymie his defender at the apex of the pass rush rep. It’s difficult to see in the endzone view, but Olaseni uses the flash technique, where he fakes like he’s going to pop quick hands, forcing the defender to commit to his move, allowing Olaseni to be in position to handle his man. Hand placement can still be better but an overall nice rep that translates to the NFL level.

Final play to highlight from Olaseni, on an outside zone run, does a nice job getting his hands inside, and throwing Zach Harrison into the ground with his upper body strength. This was one of the best run reps I saw from Olaseni while watching him, because he attacked the outside shoulder of his man and sealed the edge beautifully by driving him into the ground. There was constant improvement from the beginning to the end of the season for Olaseni.

The 12 games starting in his career may be concerning, but what Bamidele Olaseni has in size, length and mentality on the field, you can’t teach. The Steelers spent Day 3 capital last year in Dan Moore Jr., but their issues along the offensive line, plus at tackle continued to persist over the course of the season. Olaseni would be a fit for this team not only for his size, but he is a scheme fit because of how well he works in double teams, and his ability to drive his man off the ball with his heavy hands and leg drive. In addition to the clips above, I also took the time to highlight Olaseni’s pass rush reps against two of the top PAC-12 EDGE defenders in Kayvon Thibodeaux and Drake Jackson. His last three reps against Thibodeaux are what caught my eye most.

His ceiling is a starting left tackle who spends his first season or two on a practice squad as he continues to develop and round out his game. He is a bit of an older prospect who has a floor that should allow him to stick around as a utility tackle and depth piece for years to come, but his potential ceiling should entice to Steelers to select him with one of their late sixth or seventh round picks.