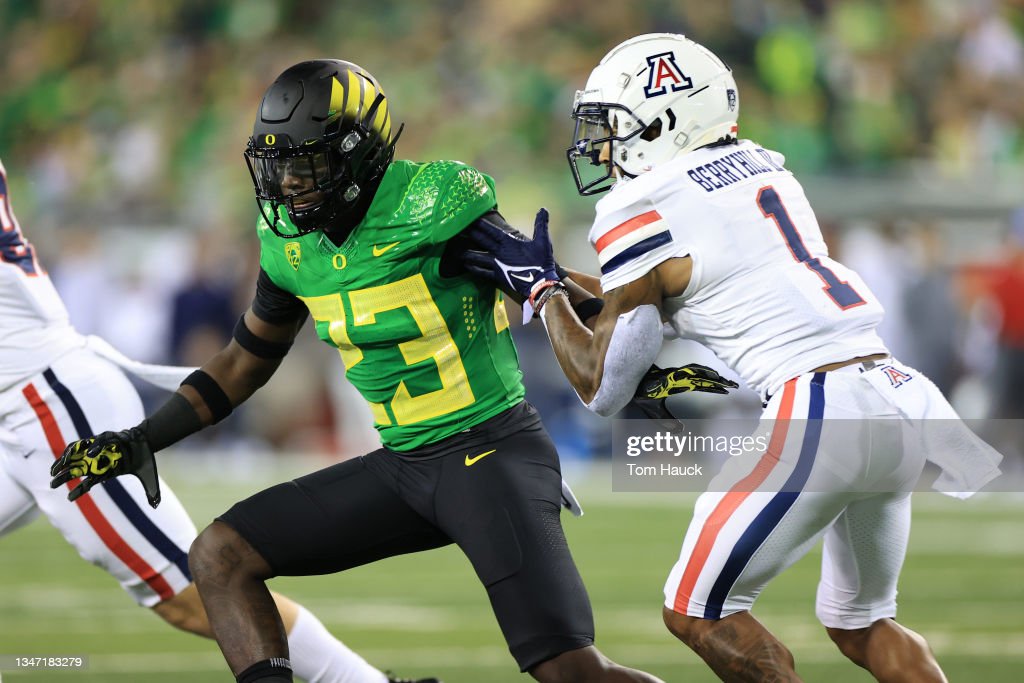 From now until the 2022 NFL Draft takes place, we hope to scout and create profiles for as many prospects as possible, examining their strengths, weaknesses, and what they can bring to an NFL franchise. These players could be potential top 10 picks, all the way down to Day 3 selections and priority undrafted free agents. Today, I’ll be profiling a defensive back that has impressive college production, but his measurables make him a difficult projection as to where he will go in the 2022 NFL Draft.

— Filled-out frame with ideal bulk given his size
— Has experience lining up at split zone safety, deep single high safety, and in the slot at the nickel/dime
— Communicates well on the backend of the defense when getting others lined up
— Wins on his instincts and awareness in the passing game
— Allows the QB’s eyes to show him where to go in terms of breaking on a pass or being in the right spot to make a play
— Has 11 INTs in three seasons as a starter with notable ball production in high school as well
— Has a knack for being in the right place at the right time with the ball skills to convert
— Can click-and-close on passes when the ball is in-front of him to challenge completions
— Will stick ballcarriers as a hitter with his small frame, being willing to put his body on the line
— Instincts show up in run support as well, coming downhill in a hurry to aid on the edges
—  Doesn’t have an issue of “want-to” as a hitter, being willing and capable of sticking his face into the fan

— Lacks the ideal size and length for the position at the next level
— Has short arms which can lead to him being late to arrive to the ball to deflect passes or not finish tackles
— Is a willing tackler, but needs to tackle more consistent angles to the ball
— Struggles when playing against size on an island in coverage and will get bodied by bigger receivers on the jump ball
— Can be a tad aggressive at attempting to make the big play and may find himself out of position
— Doesn’t have great range on the backend as a deep safety due to stature and limited deep speed
— Questions linger as to whether his best fit is as a smaller FS or a nickel corner at the next level

— Redshirt Junior prospect from Carrollton, TX
— Deemed a four-star prospect in his recruiting class and chose Oregon over the other top Power Five FBS programs
— Enrolled in January of 2018 and utilized a redshirt after appearing in three games and recorded three tackles in limited action
— Played and started in 13 games as a redshirt freshman and recorded 46 total tackles (29 solo), one TFL, two PBUs, and four INTs
— Played and started seven games in a pandemic-shortened 2020 season and notched 46 total stops (24 solo), one forced fumble, one fumble recovery, two PBUs, and an INT
— Played and started in 14 games in 2021 and finished the season with 77 total tackles (44 solo) one TFL, one forced fumble, six PBUs, and six INTs
— Consensus First Team All-American (2021), First Team All-PAC 12 (2021) FWAA Freshman All-America team (2019), The Athletic Freshman All-America second team (2019)

Verone McKinley III has had a knack for picking off passes since his days in high school, recording nearly 20 INTs before deciding to sign with the Ducks and head to Eugene to continue his playing career in college. Those instincts of finding the football followed him to the PAC 12 as McKinley finished his three-year career as a starter with 11 INTs, six coming this past season to earn his First Team All-American and All-PAC 12 honors. When you watch McKinley, he utilizes his eyes extremely well while he reads the QB to lead him to the ball. No one play shows that more than the game-winning INT versus Ohio State to seal the victory for the Ducks.

He is fearless with his body and has no resentment of putting his body on the line to make the play. He does a good job breaking on the football once thrown and making an attempt to break up the pass like we see on this play to far inside receiver on the right side of the formation. McKinley starts on the middle receiver but adjusts back to the inside guy once he sees #7 C.J. Stroud step to throw. He then drives on the ball and makes enough contact at the catch point to jar the ball lose and force the incompletion.

Here is another example from the same game of McKinley driving on the football that is thrown over the middle of the field to #5 Garrett Wilson coming out of the bunch formation and plays through Wilson’s hands, forcing the ball to fall incomplete on third down and makes the punt team take the field.

McKinley’s instincts at playing the football not only show up when he has the ball in front of him, but also when he is tasked with running in stride with receivers in coverage. He has a natural feel for where the ball is and does a good job of getting to the right spot to either make a play on the football or force the incompletion. Check out this pass deflection McKinley has on #85 Greg Dulcich as he manages to stop on a dime and bat the ball away that his thrown behind him from landing into the TE’s hands for the score. The body control and instinctual awareness on this play should be commended.

While standing a shade under 5’11 and weighing 198lb, McKinley has no problems with sticking his face in the fan as a willing tackler. He comes at ballcarriers with everything he’s got like we see on this tackle on #28 Miyan Williams who checks in at 5’8, 225lb. the stocky back is known for being a bowling ball-type of runner, but McKinley manages to stop him in his tracks at the LOS and start to drive him back as help arrives to bring him down.

Here is another run to Williams where McKinley comes up in run support on the RPO run and chops him down with the shoestring tackle to limit him to a modest gain.

Still, McKinley’s lack of ideal length and sometimes inconsistent angles to the football lead to missed tackles where the ballcarriers breaks through his grasp due to shorter arms as well as plainly just being out of position. Both of those issues occur here on this run where McKinley comes down from the split zone safety look but doesn’t break down and square up the runner, leading to a missed arm tackle.

McKinley’s lack of ideal size and superior strength also lead to him getting engulfed by blockers near the LOS if he is unable to evade the block like we see on this rep where TE #88 Jeremy Ruckert picks up McKinley coming in from the slot in run defense and plants him into the turf, springing the runner for a nice gain up the middle.

McKinley also can have a tough time challenging receivers at the catch point on jump ball attempts due to his lack of size and shorter arms. Here on this jump ball over the middle to #11 Jaxon Smith-Njigba, McKinley is in good position but fails to play the ball in the air as the receiver jumps up and catches the ball over the defender’s head.

McKinley struggled with the same problem when asked to cover receivers one-on-one at the Senior Bowl. Watch this rep against #7 Romeo Doubs where McKinley is in good position after Doubs initially shocks him back on the press release but is unable to turn around and play the ball as Doubs rises up in the back of the end zone and takes the ball off the head of McKinley in a fashion that would get him featured on “You Just Got Mossed.”

Overall, McKinley is an instinctive, opportunistic defensive back that has shown versatility playing both safety and nickel corner during his college career. He has a nose for being around the football and is a willing defender against the run. However, his lack of ideal size and superior athleticism limit his upside as he doesn’t possess the range of other top free safeties in the league and can struggle with larger receivers in one-on-one situations. That leaves his fit at the next level in question, as some teams may like him in the slot whereas others may like him deep on the backend, allowing his instincts to take him to the ball with the action happening in front of him.

When I watch McKinley play, I see a lot of similarities to former Texas DB and current Seahawks safety Quandre Diggs. Diggs also is an undersized defensive back that didn’t post great testing numbers back when he came out as a sixth-round draft pick in the 2015 NFL Draft to the Detroit Lions. Detroit started him at slot corner, but he eventually found a home at safety where his career really took off, intercepting 16 passes in the last four seasons and becoming a Pro Bowler in the last two for the Seahawks thanks to his ball skills despite his small stature.

I personally see McKinley in the same boat as a defender that may drop a little in the draft due to his measurables, but should be able to earn a role sooner rather than later with a team as a free safety or nickel defender where he can earn more playing time as he is utilized to his strengths as a instinctual defender who is often in the right place at the right time and is a willing tackler. The Pittsburgh Steelers may not have interest in a free safety with Minkah Fitzpatrick in the building but could look at McKinley as a nickel corner to start his career and can be moved around in the backfield to make splash plays for the defense.