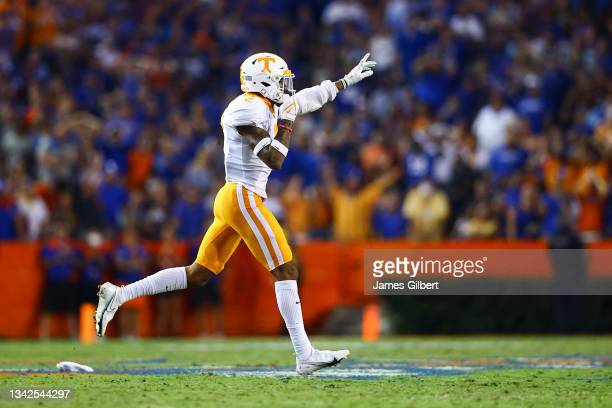 From now until the 2022 NFL Draft takes place, we hope to scout and create profiles for as many prospects as possible, examining their strengths, weaknesses, and what they can bring to an NFL franchise. These players could be potential top 10 picks, all the way down to Day 3 selections and priority undrafted free agents. Today, I’ll be profiling a speedy defensive back from the SEC.

— Good size, length and speed
— Alpha mentality; no backing down to anyone
— Experience in Man and Zone coverages
— Comfortable in Press coverage and good jam at the LOS
— Solid change of direction to mirror release; break on routes
— Can play deep or underneath in Zones
— Good route understanding and awareness
— Willing participant against the run
— Strong taking on blocks to force ball inside

Taylor is a player with length and speed who plays with an aggressive demeanor against the run and the pass. He is two thirds legs, played on both sides of the field and has experience in Man and Zone coverages.

Against the pass, he played about equally on the left and right sides of the field on the outside. In Press coverage, he plays with good balance and patience. The use of good hand placement and strength allows him to be physical at the line of scrimmage and jam up receivers and delay their release. He has loose hips and good acceleration to run with players in Man coverage with the extra gear to catch up. He has solid change of direction to mirror the release and react to the receiver’s cuts.

Vs Mississippi, Taylor (2) with a couple Man coverage plays from the bottom of the screen. On the first play he has the sideline talking to him while the ball is snapped and he shows his recovery speed. In the second play he shows good COD to stick with the in breaking route.

At Alabama, at the bottom of the screen he gets a small jam and then runs stride for stride with the receiver matching his COD at the top of the route.

In Zone coverage, he was used on the deep third in Cover 3 and underneath in Cover 2. While underneath, he again will use his physicality to jam up receivers through his area.  He has a good understanding of route combinations and passes off well. From the deep third, he gets good depth and reacts well to plays in front of him to get downhill quickly. He reads screens well and attacks aggressively. When taking on blocks he uses a good base, pad level and hand placement and works hard to shed.

Vs Pittsburgh, at the top he’ll disrupt the WR’s route to the outside but has his head back to the QB so he can see the route underneath. Good awareness, poor tackle.

Vs Mississippi, at the top of the screen, he is on the outside. He will read the quarterback and come off his man to help on the deep routes.

At Alabama, he will read this screen quickly, avoid the attempted block and make the quick stop.

At Kentucky, here is his lone interception in 2021. Dropping into Zone he reads the QB and makes a nice break on the ball for the pick six.

Against the run, he is not shy about getting involved. From a wide alignment or tight to the formation he will aggressively take on the block to force the play inside. He is not afraid of contact and is very competitive.

Vs Mississippi, he reads the play well shows good acceleration to the ball and gets in on the tackle.

Vs Georgia, at the bottom he shows good awareness taking on the bigger blocker to force the play inside and then spinning off to save a good run from being a great one.

When playing Press without the jam, his reactions aren’t as smooth and he will give up some space in the initial part of the route. In Off Man Coverage, he gives too much space will get on his heels and that combining with his long legs can make his transition take extra time. His ball production overall is not very high but he wasn’t targeted a lot in some games. He will try to rip the ball out too often rather than making the tackle. When tackling he aims too high or lunges late and struggles to get players down.

Vs Mississippi, at the bottom he is off coverage and gives some space and his transition isn’t as smooth as it could be and he is saved by an off target throw.

Vs Georgia, here he is in Press but does not use a jam giving up ground forcing him to grab the receiver. Oddly, no flag was thrown here.

Overall, Taylor has good size and length and plays a physical brand of football. He has experience in Man playing in Off and Press coverage and playing on both sides of the field. He is physical with the receivers and the speed to run with anyone. In Zone, he can play the deep third or underneath and has good route awareness. A willing run supporter he will attack the ball and blockers to constrict lanes. Areas to improve include balance and spacing in Off Man coverage, his aim point while tackling and ball production.

Taylor is an alpha and plays that way. He’ll take on anyone who comes his way. His best fit is in a Zone heavy (Cover 2, Cover 3) scheme that will also allow him to play Press. Pittsburgh has mixed up Zone and Man coverages in the past and I would expect the same even with a defensive coordinator change. His speed and mentality would be a nice addition to the defense. My comp for him will be Shaquill Griffin who has similar size, speed and aggressiveness.

Games Watched: 2021: Vs Pittsburgh, Vs Mississippi, At Alabama, Vs Kentucky, Vs Georgia