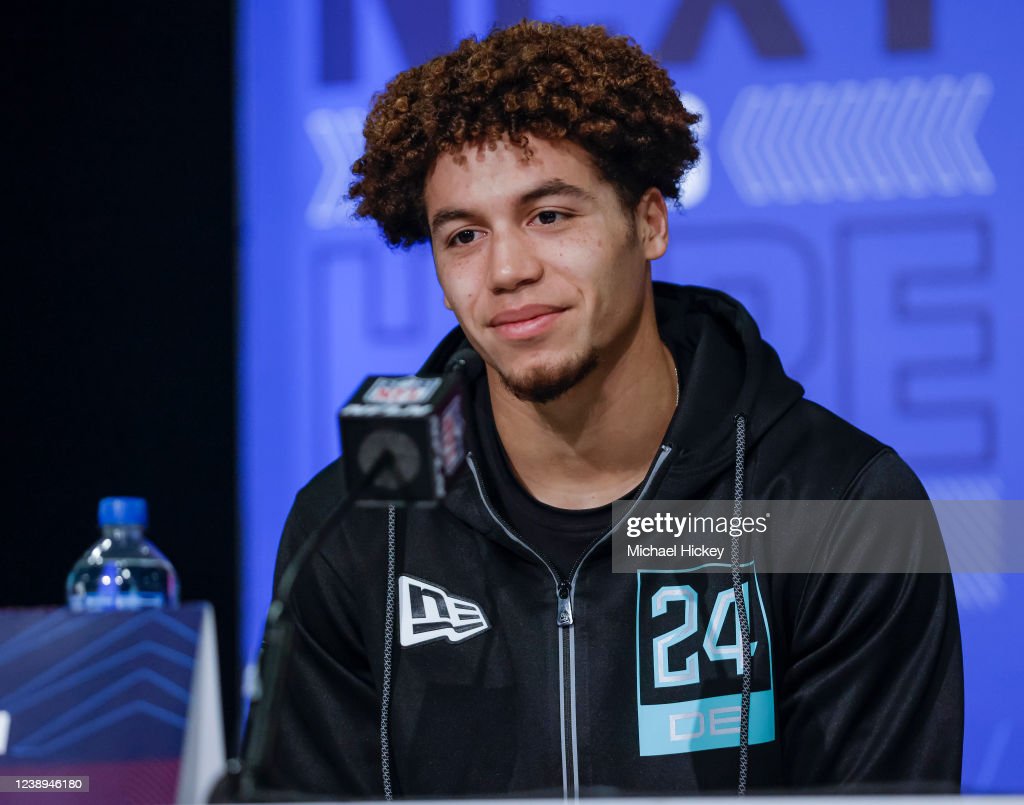 From now until the 2022 NFL Draft takes place, we hope to scout and create profiles for as many prospects as possible, examining their strengths, weaknesses, and what they can bring to an NFL franchise. These players could be potential top 10 picks, all the way down to Day 3 selections and priority undrafted free agents. Today, I’ll be profiling Sam Houston State CB Zyon McCollum.

— Quick feet while mirroring receivers in press coverage
— Does a good job of mixing up his press looks at the line of scrimmage, keeps receivers guessing from rep to rep
— Good hips, opens in transitions quickly and efficiently without wasted movement
— Does a great job of of playing through the receivers hands with violent and well located punches to generate pass breakups
— Smooth click and close when driving routes from off coverage
— Has experience both playing on the boundary and in the slot
— Does a solid job of high pointing the football when in phase
— Solid open field tackler, rarely allows YAC opportunities
— Uses strength well to flatten routes in press coverage
— Does great work in the box as a run defender, plenty of experience serving both as a force player off the edge, can also effectively maintain C-gap run responsibilities

— Lack of desired arm length can allow receivers to box him out at the catch point
— Has a tendency to open hips early in press coverage from time to time, allowing receivers to cross his face inside
— Has minor lapses in eye discipline which can get him into trouble

After exiting the free agency period with a talented and experienced cornerback group, including former Ahkello Witherspoon, Levi Wallace, and Cameron Sutton, cornerback is no longer atop the Steelers list of needs entering the 2022 NFL draft. Regardless, a team can never have enough talent at cornerback in the modern NFL. For reference, from 2019-2020, the Steelers fielded a cornerback room of Joe Haden, Steven Nelson, Mike Hilton, and Cameron Sutton, all of whom played important roles in the teams sub packages.

Enter Zyon McCollum, a fifth year senior out of Sam Houston State who put together absurd ball production in college, forcing six fumbles, collecting 54 passes defended, and picking off 13 passes, a pair of which he returned for scores. After turning heads by showing his elite change of direction ability, short area quickness, and long speed at this year’s NFL combine, McCollum has vaulted himself into the discussion among the Day two prospects at the cornerback position. On film, McCollum’s elite hip fluidity, quick feet, and top end ball skills allow him to clamp down on opposing receivers, often making quarterbacks pay when they choose to throw in his vicinity.

McCollum’s combination of top end hip mobility and foot quickness allows him to mirror receivers with ease, staying on the top shoulder in press coverage where he can close space and contest the catch point. Below, aligned in the boundary against North Dakota, McCollum uses an inch technique out of press coverage, patiently giving ground while matching the receivers single stick release. After turning his hips to match the inside release, McCollum flips his hips effortlessly to stay on top of the back shoulder fade, close to the top shoulder, and play through the hands for a nice pass breakup.

McCollum does a great job of varying his approach in press coverage to keep receivers off balance in their releases from rep to rep. Below, once again aligned in press coverage, this time to the field, McCollum opts for a one arm stab with his inside arm at the snap, forcing the receiver wide release on his outside release.

As the receiver declares downfield, McCollum opens into a crossover run, before identifying back shoulder, throttling down, and placing a well located punch through the receivers hands to jar the football loose for another pass breakup.

One of the best traits in McCollum’s game entering the NFL level is his inside outside versatility, as he has plenty of experience guarding receivers out of the slot, primarily doing so out of press coverage. Below, aligned in press coverage over the slot receiver, McCollum aligns in press coverage, once again patiently giving ground with an inch technique before engaging a two hand jam and forcing the receiver wide up the seam.

Once the receiver declares, McCollum locates the near hip, turns to find the football, and explodes off the ground to extend and high point the football for an impressive pass breakup. As McCollum understands that he has help over the top from the post safety, he is able to play from a trailing position here as opposed to his normal top shoulder position, further showing his IQ and versatility in coverage.

McCollum’s ball skills and ability to locate the ball at the catch point are among the best in the 2022 draft class, evidenced by his top end ball production at the collegiate level. Below, once again aligned in press coverage, McCollum attempts to engage an off hand jam at the line of scrimmage, but misses as the receiver takes an outside speed release.

Once beaten off the line, McCollum flips his hips and closes to the near hip swiftly, closing space into the receivers chest before turning into the receiver to locate the football and securing an interception on the back shoulder fade. McCollum’s combination of ball skills and top end change of direction ability helped make him one of the best pure takeaway artists in all of college football.

Often aligned as a slot corner, McCollum naturally got a good deal of work against the run against 12 and 13 personnel sets. Below, aligned head up on the H-back, McCollum explodes off the ball with an inside head fake before turning the corner outside, disengaging from the block with a long arm, and diving low to shut down a cutback lane.

McCollum’s ability to function in the box could allow defensive coordinators to move him on the inside to keep Nickel sets on the field against teams that are a threat to run out of 11 personnel, which in itself provides great value.

As I referenced previously, McCollum’s ability to vary his approach in press coverage and keep receivers off balance keep receivers guessing at the line of scrimmage. Below, aligned in press coverage to the boundary, McCollum engages a physical jam with his inside hand, maintaining his inside leverage while forcing the receiver toward the sideline on a diamond release. As the receiver now attempts to work through contact back inside, McCollum is able to flip his hips, flatten the receivers break, with a two hand jam, and break downhill and limit the catch to just three yards.

McCollum’s work in the box continued to improve as he added strength throughout his career at Sam Houston State. Below, in an FCS 2021 Spring Playoff Quarterfinal game against North Dakota State, McCollum aligns in a two point stance as the boundary edge defender against a 13 personnel heavy set.

At the snap, McCollum crashes downhill, colliding into a downblocking tight end before triggering, knifing through traffic, and shooting low to stop the quarterback power for a big loss, forcing an early punt.

While McCollum is an elite athlete with prototype size at the position, his arm length of 30 ¾” isn’t exactly ideal for his build, and can occasionally make it difficult to defend receivers on well thrown fade balls, where they can create vertical separation.

Below, aligned in press coverage to the field with North Dakota State threatening near the goal line, the McCollum, correctly protecting his inside leverage, allows the receiver to generate separation working toward the line. After closing space to the receiver near the corner of the endzone, McCollum works to high point the ball, but fails to contest the pocket on a well thrown ball, allowing a touchdown.

Overall, Zyon McCollum is an extremely explosive athlete with top end ball skills, change of direction ability, physicality and versatility to be aligned all over a defense. Entering the NFL, McCollum should be able to compete immediately with his ability to play effectively on the inside, with a ceiling of becoming a boundary starter who can be aligned all over the field.

While McCollum is extremely effective in zone as well, his ability to play tight man coverage from a press alignment, both on the boundary and in the slot, should immediately help him compete for snaps in 2022. In his ability to generate takeaways while primarily playing press man coverage, McCollum’s college tape reminds me of J.C. Jackson, who similarly relies on quick feet, elite change of direction ability, and ball skills to eliminate receivers in press coverage.

If drafted by the Steelers, McCollum could immediately become a fixture in the team’s Dime packages, while also upgrading depth with the ability to play effectively on both the boundary and in the slot. In Next Gen Stats Athleticism score rankings, which date back to 2003, Zyon McCollum was the fifth cornerback ever to record a max-99 score of all time, a testament to elite movement skills. If a team is looking to target a cornerback in the late day two-early day three range, Zyon McCollum would likely provide immediate value and help generate splash plays as he is one of the most NFL ready prospects in the 2022 cornerback class.