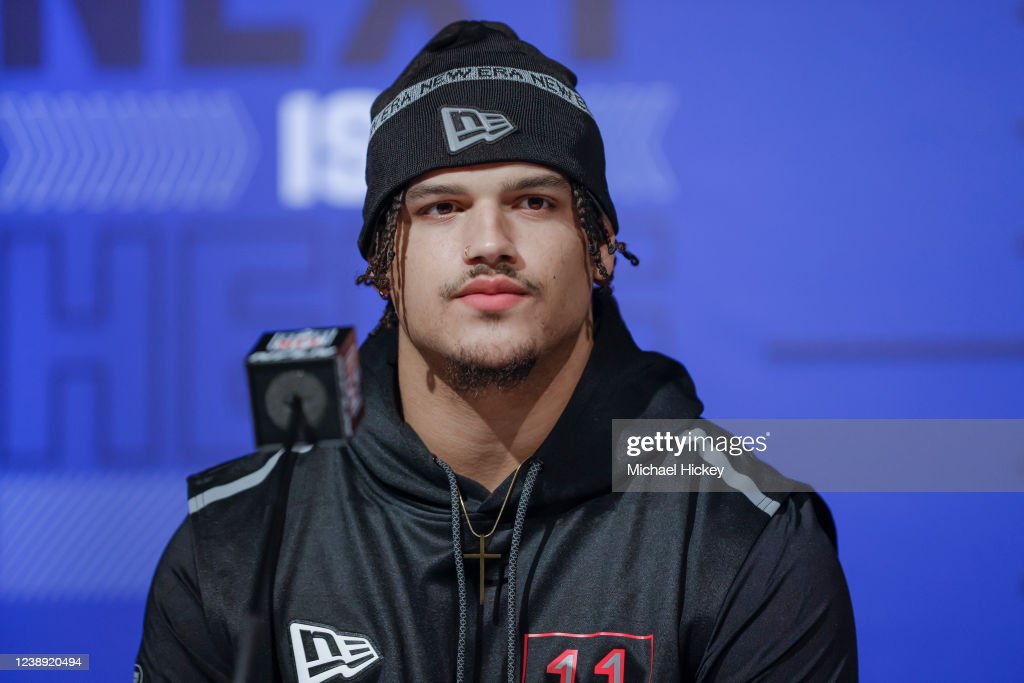 From now until the 2022 NFL Draft takes place, we hope to scout and create profiles for as many prospects as possible, examining their strengths, weaknesses, and what they can bring to an NFL franchise. These players could be potential top 10 picks, all the way down to Day 3 selections and priority undrafted free agents. Today, I’ll be profiling Houston DE Logan Hall.

— Power & strength are on display from the first snap of the game until the final drive of a contest
— Relentless effort on each snap to win his individual battle
— Bull rush looks overpowering many times on film and has good ability to stab rush his blocker backwards using either his left or right arm/hand
— Doesn’t concede to double teams, instead it seems he forces their efforts even more so to block him by providing constant hand to hand combat and miss-direction
— Gets small and skinny at the point of attack, especially against the run, and can easily explode past interior offensive line positions in outside or inside zone blocking schemes
— Never gives up on a play even if it’s 10+ yards downfield
— Versatile in the sense he can play all along the defensive interior line from a 0-tech out to inside 4-tech in some instances as well – makes his living in the B-gap
— Good timing on stunts and his quickness allows him to win his match-up and create pressure
— Rarely misses when tackling and the play is over once he gets his arms wrapped around a ball-carrier and/or passer
— Can play through holding, often making plays through no calls

— Comfortable looking pass rush moves are limited but has a swim move and spin move in his arsenal which could both use a little work
— Tends to look and rush tall on his swim move which allows a blocker to knock him off balance
— When matched-up with an offensive tackle’s longer arms, opposed to an interior lineman, they tend to get underneath the outside of shoulder pads to impede his progress
— Will need to add and refine pass rushing moves if lining up in front of OT’s at the next level
— Limited Special Teams experience with zero snaps on kick return and kick coverage units during his college career — did however play on FG & XP block units all four years and some punt return and FG/XP kicking units as well
— Does well enough of keeping eyes on the passer when helping to collapse the pocket but rarely keeps position to extend arms effectively and bat passes – just (2) batted passes in college despite tall and long frame
— No history of creating turnovers; 0 forced fumbles

Teammates and coaches alike may refer to Logan Hall as quiet but he’s someone who can clearly make noise every snap during a game.  As an incoming Freshman at Houston, Hall weighed a mere 241 pounds compared to the 283 lbs. he carries well currently.  Hall can play skinny, easing through gaps and finding breathing room along the offensive line when rushing the passer.

Hall’s an impact player in the sense that he’s the one who opposing teams seek to double team.  On many occasions the film shows Hall can dispatch of interior combo blocks with regularity.  As a pass-rusher it’s difficult to find plays where he’s stymied. There are snaps and matchups where Hall will challenge an offensive tackle and the pass rushing moves look limited but his niche of shooting inside and across the face of blockers are fun to watch.

On this particular play, Hall lines heads-up over the RT and quickly shoots across the face of the RG to disrupt.  Hall gets crafty against the run blocker by hooking his arm to keep him close to the action and making for first contact to the runner.  The intended A-Gap has no chance of success, causing the RB to bounce to the B-Gap and the subsequent big hit from Hall’s teammate.

Here’s another good example of how Hall quickly gets across the face of a blocker.  Hall lines up on the outside shoulder of the LG and the blocker has little chance but to clothesline him high as he’s already been beaten at the snap.  Despite the hold, or attempt of a hold, Hall nearly simultaneously makes first contact to the ball carrier.

On this play against an RPO look, Hall makes his push against the RG and once the handoff is recognized, Hall disengages quickly to make the tackle and prevent a big gain.

Good power and balance on display for this rep against the run as Hall moves the LT out of the way and then tries to tackle everyone in sight to end the play.

As a pass-rusher when using his swim move, Hall looks tall and can get off balance, but there’s still no quit.  In these moments, instead of giving-up, Hall will get an arm in the air to help block a passing lane.

Another example of Hall’s swim move and how he makes it work by getting skinny against a double team against Memphis.

Logan Hall is fun to watch operate and his play sticks out because he wins his matchups.  His negatives aren’t glaring by any means as a defensive line coach will have a very good base to work with when Hall arrives at the facility of the team who drafts him. Having an above average ability to play well against the run and as a pass-rusher, along with line versatility, will most likely garner some high expectations for teams and perhaps fan bases as well.  Would have to imagine Hall will feel and fit comfortably into a team’s plans for this upcoming season.

Down the road from now it will be interesting to see if Hall develops into Defensive End or if he will continue to see most of his snaps against interior lineman.  Having watched him entirely in either a 3-point or 4-point stance, not sure if he will translate to an EDGE rusher from a 2-point stance in the NFL but a defensive coach could very well tinker with the idea.

First thoughts in terms of a pro level comp were rather quick as it’s hard to ignore Chris Wormley.  Both are built similar with Hall being a little taller and lighter.  When looking at the RAS comparison, both are nearly identical in terms of overall score.  The way Hall operates from the B-gap has shades of Wormley.  After watching Hall film, it forced me to go and watch Wormley from this past season, his game against Green Bay more specifically.  Wormley, much like Hall, shoots quickly across the face of guards and when double teams arrive, Wormley is also apt to get an arm up.  Where Hall’s game lacks in comparison is he tries to find that opening between the blockers – “getting skinny”, whereas Wormley’s push and pull technique of the blocker is much more effective.