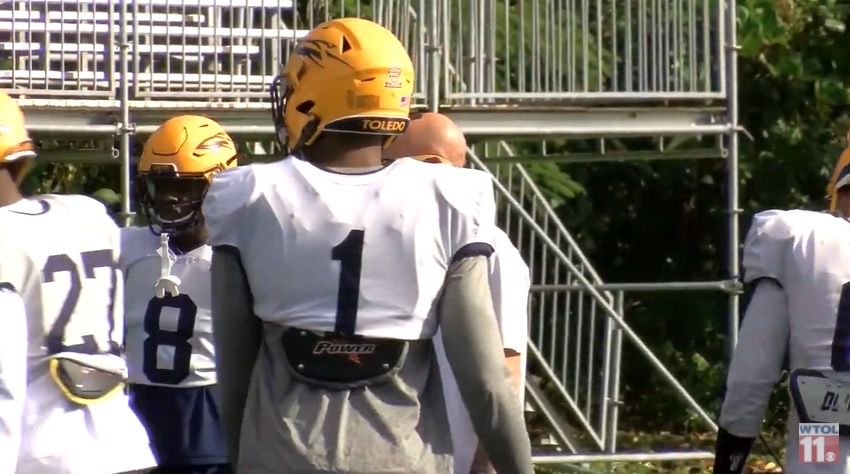 From now until the 2022 NFL Draft takes place, we hope to scout and create profiles for as many prospects as possible, examining their strengths, weaknesses, and what they can bring to an NFL franchise. These players could be potential top 10 picks, all the way down to Day 3 selections and priority undrafted free agents. Today, I’ll be profiling Toledo Safety, Tycen Anderson.

— Very versatile with the majority of his responsibilities in 2021 coming from the slot and in the box, but can play deep safety on the back end as well
— Lots of speed and it’s noticeable; sprints on plays to the opposite side of the field and also when coming down from Free Safety position against short passing routes
— Great communicator, often diagnosing where the play is going
— Fundamentally sound tackler
— Willing to stand his ground against the run when playing in the box
— Special Teams experience; 800+ snaps across five ST units
— Plays comfortable while exceling in zone schemes

— Plays a bunch of press coverage but rarely jams or gets his hands on the receiver at the snap
— Seems his preference in coverage on routes downfield is to make it a foot race rather than playing tight
— Because of coverage becoming a foot race, lacks a little bit of awareness of tracking the ball in air
— Lack of creating turnovers; 2,300+ defensive snaps in his career with zero forced fumbles, 2 INTs (1 as a true Freshman and 1 as a Sophomore) and 12 PBUs
— Will not deliver the knockout blow when tackling, especially against the run

— Saw action in 55 games during 5 year career (27 official starts)
— Career: 167 solo tackles (57 stops) 2 sacks, 2 INTs, 0 FF, 20 missed tackles
— 2021: 34 solo tackles (17 stops) 5 missed tackles
— 2021 All-MAC first team defense and 2020 All-MAC second team defense
— Attended St. John’s Jesuit High School in Toledo as a multi-sport athlete (basketball & track)
— Three-star recruit out of HS, chose Toledo over Air Force, Bowling Green, Eastern Kentucky, and Kentucky to stay close to home so his entire family could attend his games
— Draws inspiration from his Grandmother, especially regarding education, with vivid memories of watching her complete her GED when he was younger
— Graduated in 2020 with a degree in professional sales and currently completing his MBA
— Interned with TDC this past Summer which led to signing a three-year exclusive deal with RightTrak, an online financial education program for students and young adults, to which stays in the forefront of Tycen’s mind as mentioned in his discussion with Alex Kozora at the Senior Bowl.

There’s nothing particularly flashy about Tycen Anderson’s game when watching film – he’s simply a sound football player.  Sure, the speed sticks out on many snaps along with his ability to organize teammates.  Diagnosing an opponent’s plays evident as well.  Rarely are there gambles, regardless of where Anderson lines up on the field.

All signs point to Anderson having a great feel for the game.  If it’s a stacked or bunch formation, Anderson takes the responsibility of the motioning player, while directing teammates on what to do or where to go – always communicating to his teammates.

When in press coverage it’s rare he gets hands on the receiver or make an attempt to re-route off the line.  Downfield routes become a foot-race more so than a battle for the ball.

When playing off a few yards in coverage, speed and tackling is on display.

Making line of scrimmage plays is where the highlights are made.  Here Anderson recognizes late motion to his side of the field and neutralizes any gain while earning a defensive stop.

Here’s another example of excelling from the slot as Anderson is reading the backfield before suddenly noticing the screen pass and coming up with another stop.

The one area you want to see more from Anderson is in the run game, especially while in the box.  On film there’s instances of both earning the one-on-one opportunity by avoiding blocks and standing his ground at contact, but the seeking contact in the hole and ability to deliver huge stops are lacking.  Often you’ll see attempts to jump in for an assist or a decision to tackle high.

If there’s a team looking for someone with speed, true versatility and above average recognition on the defensive side of the ball, then Tycen Anderson will fit their mold.  There’s perhaps more than a few position coaches and defensive coordinators who would love to have the opportunity to further develop Anderson at the next level.

Special teams experience alone could move Anderson from a late day-three pick to hearing his name early afternoon.  Logging 800+ snaps on Special Teams is a rarity as only one other player from the MAC accomplished this same feat since 2017.  What stands out in regards to his performance on STs, is just (1) penalty called on Anderson during those hundreds of snaps.  What’s a bit puzzling though is even with the speed at his disposal, never once did Anderson line-up as a gunner in punt coverage.  He was always a mainstay at either PLT/PRT or as a wing and sometimes guard.  On punt return however Anderson does have experience as a vice.  Anderson’s 15 combined solo tackles in punt and kick coverage to go with only two misses will certainly catch a coach’s eye as well.

Zone coverage seems to fit Anderson more so than man.  Anderson can quickly diagnose the play design in zone coverage while sprinting over to help.  Man coverage could be a weakness, especially in press as receivers have the ability to quickly get even with him downfield, despite his speed.

There’s a couple of comps which come to mind when watching Anderson play.  Tracy Walker of Detroit plays the same style in terms of quickly getting to ball carrier or pass catcher and making the safe tackle.  Fellow teammate Will Harris in Detroit offers comparisons due to versatility as both also lack in forcing turnovers as well.

Depot Draft Grade: 7.1 (Late 4th round or Early 5th round) – Back-up with some raw traits who can contribute on special teams.