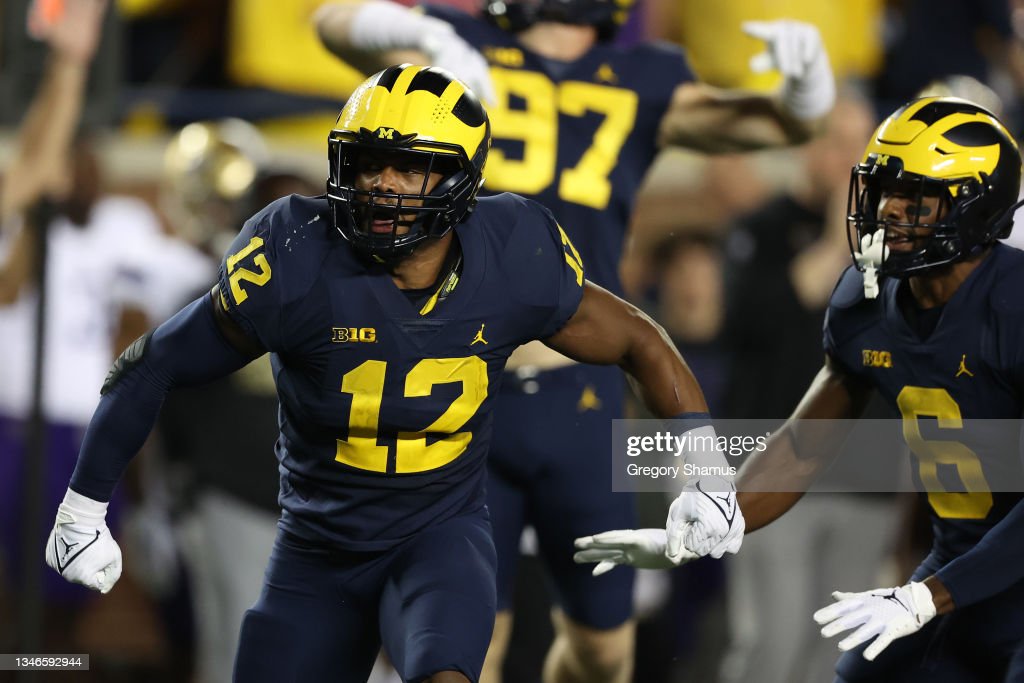 From now until the 2022 NFL Draft takes place, we hope to scout and create profiles for as many prospects as possible, examining their strengths, weaknesses, and what they can bring to an NFL franchise. These players could be potential top 10 picks, all the way down to Day 3 selections and priority undrafted free agents. Today, I’ll be profiling an inside linebacker from Michigan.

It was reported this week that the Steelers brass had dinner with Michigan linebacker Josh Ross. He is a two time captain for the Wolverines and has been manning the middle of their defense for the past two seasons.

Against the run, Ross has the mentality and aggressiveness of physical linebacker. He reads his keys well, is solid working through traffic and shows good short area quickness to get downhill. He is willing to fill gaps to take on offensive lineman and lead blockers with good pad level to stunt at the point of attack and clog lanes. To avoid blockers in gaps he uses solid agility to duck under and around the bigger opponents. His timing on run blitzes is good to hit the gap quickly to get into the backfield.

Vs Washington, Ross (12) shows his willingness and aggressiveness to get downhill and take on the lead blocker to clog the lane.

Vs Ohio State, he is again getting downhill quickly. This time he will shoot the gap and make the stop behind the line of scrimmage.

Vs Ohio State, in goal line defense there is a big hole for the running back but Ross is able to stop him short of the end zone.

Against the pass he was primarily asked to drop into the curl zone and occasionally the flat zone. He plays with eyes on the quarterback and moves to mirror him. There were occasional reps where he was in Man coverage in the short or flat area and he displayed good awareness on screens. To rush the passer he was used to mug the A gaps, act as a penetrator on stunts and to blitz. His blitz timing and acceleration was solid to get into the backfield.

Vs Washington, this was about the best of his Man coverage reps. Solid but not that difficult with the TE coming right to him.

At Penn State, here are a couple of clips of him against screens. The first play is to the outside to a receiver and the second to the tight end.

On blocks coming from his sides when he doesn’t have time to ready himself he can get overwhelmed by blockers including tight ends. There isn’t a lot of power behind his tackles and he will slip off runners. On plays to the outside he is often left lunging for quicker players. His speed seems to diminish quickly when chasing the ball. Angles to the outside on the front side of plays are inconsistent leading to overshooting the target.

Vs Wisconsin, he has his eyes in the backfield and the tight end is able to put him on the ground. This happened a couple times in this game.

Vs Wisconsin, the blitz timing is really good and has a clear line to the running back but slips off of him missing the tackle.

In coverage, he is bit stiff and has adequate change of direction. Being more physical bumping receivers running through his zone would disrupt routes more effectively. His following of the quarterbacks eyes often led him out of his area and too close to teammates at times colliding with them. Late in the season, especially against Ohio State he was taken out on passing situations.

At Penn State, he should jam the tight end running through his zone and pass him off but he stays with him leaving the middle of the field open.

At Penn State, he is showing blitz to start the play. At the snap he drops back and nearly runs into one teammate. His attention seems to go to the tight end on the opposite side before deciding to jam a crossing receiver. In that process he slows another teammate opening up enough space for the completion. I’m not sure what his role was on this play but there seemed to be confusion.

Overall, Ross reads his run keys well and is a downhill linebacker. He will take on blocker with good pad level to clog lanes and has solid agility to duck under them. His timing is good on run blitzes and plays an aggressive style bigger than his size. He was used in mostly in Zone coverage in the curl area and occasional in Man coverage on TE’s and RB’s. To rush the passer he was used as a penetrator on stunts, to mug the A gaps and blitz.

Right off the bat, his speed is a concern. Areas to improve include taking on lateral blocks, running through the ball, angles to the outside and aiming point when tackling. In coverage he will need to show he can do more than Zone drops consistently, must jam receivers more effectively and stay within his area in coverage.

The Steelers immediate need at linebacker has been filled but improved depth is needed. The fact that he met with the Steelers is interesting but I don’t think Ross is a good candidate for this defense. I even wanted to consider him as a hybrid linebacker/safety due to his size. Unfortunately he lacks the speed and tackling consistency to be a special team player and would be a liability in coverage on defense.

Maybe the Steelers wanted to talk with him because he is a two time captain and they wanted to ask about other players. There are several, more athletic linebackers in the draft that would be better options. For a comparison you don’t need to look far. They Steelers have three linebackers on their roster with similar builds and liabilities in Robert Spillane, Ulysees Gilbert and Tegray Scales.

Games Watched: 2021: vs Washington, at Wisconsin, at Penn State, Vs Ohio State, Vs Georgia