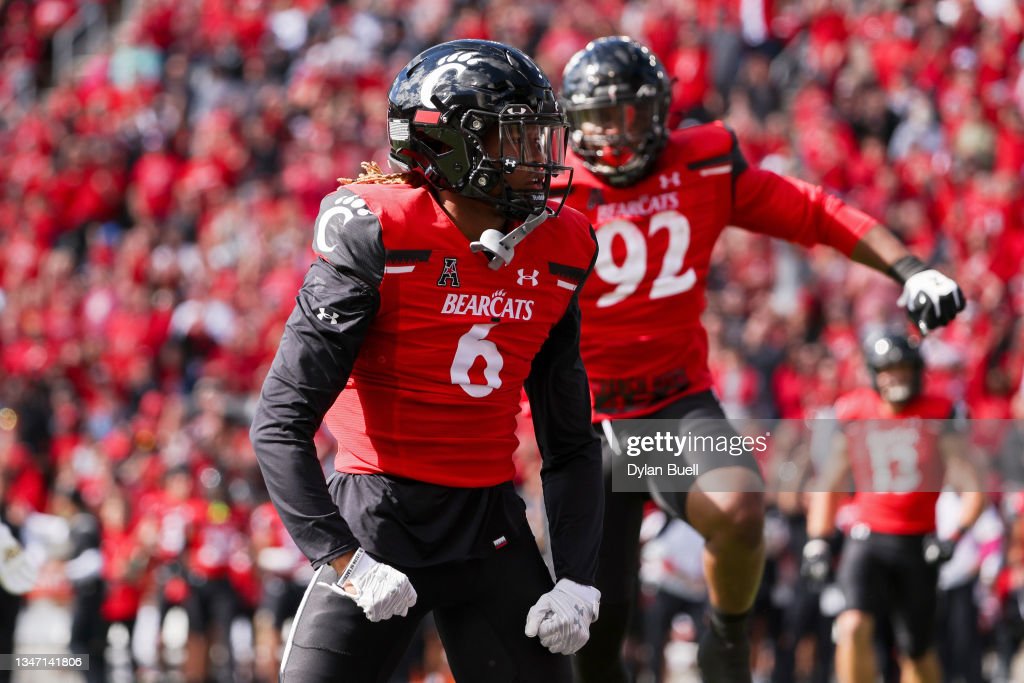 From now until the 2022 NFL Draft takes place, we hope to scout and create profiles for as many prospects as possible, examining their strengths, weaknesses, and what they can bring to an NFL franchise. These players could be potential top 10 picks, all the way down to Day 3 selections and priority undrafted free agents. Today, I’ll be profiling a safety prospect for Cincinnati Bearcats that hasn’t garnered the headlines his teammates have in the secondary, but has been a steady, reliable contributor on a talented defense that many teams are excited about as a prospect.

— Has a strong, thick build for the position
— Possesses the size and strength to hold his own when rolled up in the box as a sub package LB/SS
— Has experience playing split zone safety, single-high safety, in the box, and at the nickel
— Willing and capable tackler that will go through his target on contact
— Has experience playing in the slot as the nickel/dime defender covering slot receivers and TEs
— Played CB in high school and a little at Howard, having the feel for running with TEs and slot receivers in coverage
— Instinctive safety that does a great job reading the QB’s eyes and letting them take him to the ball
— Can have a quick trigger in downhill pursuit showing click-and-close ability in transitioning from a backpedal to a forward drive on the ball
— Does a good job in zone coverage reading the play in the front of him and flowing to the action
— Plays the big nickel/SS role when in run support, keeping the edge contained and sticking ballcarriers on contact
— Aggressive, physical demeanor as a tackler that wants to go through you rather than trip you up

— Can be better transitioning in coverage when it comes to backpedal and hip turn when manned up
— Long speed and acceleration in recovery mode are only average
— Will miss tackle attempts when he leaves his feet rather than squaring up the ballcarrier and running his feet though on contact
— Can get tricked by head fakes by the QB as he tries to anticipate the pass, allowing the passer to manipulate him on occasion

— Redshirt Senior prospect from Cincinnati, OH
— Won conference titles in back-to-back years in HS while also tabbed for the SWOC Sportsmanship Award in 2015
— Originally committed to Howard University coming out of HS
— Played in 21 games at Howard University from 2017-18 and totaled 93 tackles (77 solo), 17 passes defended, five tackles for a loss, five interceptions with one returned for a 41-yard TD, two forced fumbles and a pair of fumble recoveries
— Decided to transfer back home to the Bearcats, having to sit out the entire 2019 season due to transfer rules
— Made two starts and played in all 10 games during his first full season at UC where he totaled 26 tackles, including 19 solo stops, along with two pass break ups and a tackle for a loss
— Managed to have a breakout campaign in 2021 as a full-time starter where he totaled 96 tackles (57 solo), five TFLs, one sack, nine PBUs, and a pair of INTs in 14 games played
—2021 All-AAC First Team selection, 2021, CoSIDA Academic All-America Second Team, 2019 AAC All-Academic Team
— 2021 permanent team captain

When you reference the Cincinnati Bearcats defense from this past season, often the names Ahmad “Sauce” Gardner, Darrian Beavers, Cobie Bryant, and Myjai Sanders are the guys that are brought up often. However, S Bryan Cook is a quality draft prospect in his own right, so much so that several high-ranking league executives in the league that I spoke to at the NFL Combine said that Cook is an underrated player that is going to go a lot higher and be a better pro than that national media currently realizes. My former co-worker at Florida and current Cincinnati Assistant Strength and Conditioning Coach Jeremiah Ortiz would agree, and had this to say when I asked him about Cook:

“Cook is a high energy guy in the weight room and on the field that sets the tone. He loves to compete and handles his business like a pro.”

When you watch the tape on Cook, you quickly understand the fandom amongst teams in the league. He boasts a filled-out frame and a reckless abandonment as a tackler, playing the role of a heat-seeking missile and “sets the tone” like JO said for the Bearcat defense. He shows no hesitancy as a hitter, aggressively running through ballcarriers on contact and being an enforcer over the middle of the field on receivers who dare catch the ball with him in close proximity. Check out this hit Cook lays on this Houston WR who attempts to make the grab, running full speed to his outside shoulder and blows up the receiver on contact, separating ball from man on the violent collision.

Cook shows his speed in pursuit as well in the run game, whether that be coming from the deep safety spot or when rolled up in the box. We see an example of the latter here as the Temple QB decides to keep the ball and run out to his right. Cook comes down from the box and cuts him off, giving him a kind greeting by wrapping up his legs, lifting off the ground, and driving him into the turf for the big stop.

Cook is one of the best safeties in this draft class when it comes to run support, having the instincts and awareness to drive on the football quickly downhill as well as the strength and size to take down nearly any ballcarrier to the ground. Here is another example against East Carolina where Cook comes from over top to fill against the run up the middle, properly squaring up the runner and drives his legs on contact as he takes out the motor of the back, wrapping up his legs and drives his shoulders into the ground.

Cook shows absolutely no fear in run support when asked to play through contact and work off blocks. He actively invites contact and seeks it out like on this rep where an outside draw is called to the right. The back has two pullers out in front but Cook manages to run past the first puller and goes low through the legs of the second puller, grabbing the leg of the runner in the process and takes both men down with him behind the LOS.

While Cook may get labeled as a box/SS by some, he has a fair amount of exposure playing in coverage effectively as well. He was a former CB in high school and played some there at Howard before coming over to the Queen City, understanding zone coverages and the feel for running with TEs and receivers when tasked with man. Here is a rep where Cook lines up as a split zone safety near the middle of the field and sees the pass coming to the receiver along the right sideline. Cook drives on the ball, having the range to get to the receiver as he attempts to make the catch, giving him a big shot that dislodges the football to force the incomplete pass.

Cincinnati trusted Cook often to be the last line of defense in coverage often having play single-high safety in the coverage formation, thus suggesting that he can be free/strong safety versatile to a point at the next level. Here is a nice heads-up play by Cook in the CFP Semifinal Game against Alabama where he is playing single-high capitalizes on the overthrow by #9 Bryce Young, picking off the pass to giving the ball back to the offense.

Given his CB background, Cook is fairly reliable in man coverage as he is playing the ball in front of him in zone. He has enough recovery speed to stay in the hip pocket of the pass catcher and knows how to play the ball to go for the incompletion. On this example against Indiana, Cook lines up right across from the TE in-line on the left side of the formation and carries him across the field, staying step-for-step with him as he jumps the pass at the last second in the end zone for the INT.

Still, there are some areas of Cook’s game that he does need to work on to maximize his impact in the pros. While he did record two INTs this past season, he does need to do a better job locating the football in the air and make a conservative effort to play the ball, whether it be for the PBU or the INT. Here against the Cougars, we see Cook recover in time to get up next to the receiver to knock away the pass. However, should he recognize the ball in the air and undercut the receiver by going in-front of him rather than behind, the following play is likely a pick.

Another thing you see from the clip above is that Cook occasionally has his eyes fail him in terms of locking onto the QB in the pocket, staying locked in too long on the passer, thus falling for head fakes or letting receivers get past him deep. Here’s one example where Cook starts to work downhill on the RPO, committing to the edge while #0 Darrian Beavers has outside contain, thus leaving an opening on the backend that the QB exploits for a nice chunk gain over the middle on the pass.

Overall, Bryan Cook is a throwback, rugged defender in the secondary that provides versatility in how defensive coordinators can line him up. He brings nasty intentions as a hitter while also having the coverage skills to effectively cover TEs down the seam and across the field while also being a competent zone drop defender. When looking for a pro comparison for Cook, Indianapolis Colts DB Julian Blackmon came as a sensible option, for the two share near identical size and athletic traits, a physical play style as a tackler, and also the coverage skills to be moved around in the secondary.

Blackmon was selected in the third round of the 2020 NFL Draft by the Colts and enjoyed a stellar rookie campaign for them as a steady, productive presence in the secondary. I foresee a similar impact for Cook early on in his NFL career as a player that may not rack up crazy PBU or INT numbers but can be a plug-and-play SS with the ability to take snaps at free safety or nickel corner if called to do so. It remains to be seen how Cook tests, but on film I see an athlete with enough speed and quickness to do what is asked of him for the position as long as his eyes are in the right place.

Cook told me at the Combine that he had met with the Pittsburgh Steelers in a formal meeting and enjoyed his conversation about ball and life with Coach Tomlin. Given the fact that Pittsburgh isn’t hurrying to re-sign FA Terrell Edmunds or has made a huge splash in signing star FA Tyrann Mathieu, there is some plausibility that they could be targeting a safety early in the 2022 NFL Draft. Should they bypass the position in the first round, Cook would be a good name to keep an eye on as a potential draft target and a good fit for what the Steelers are looking for at strong safety.