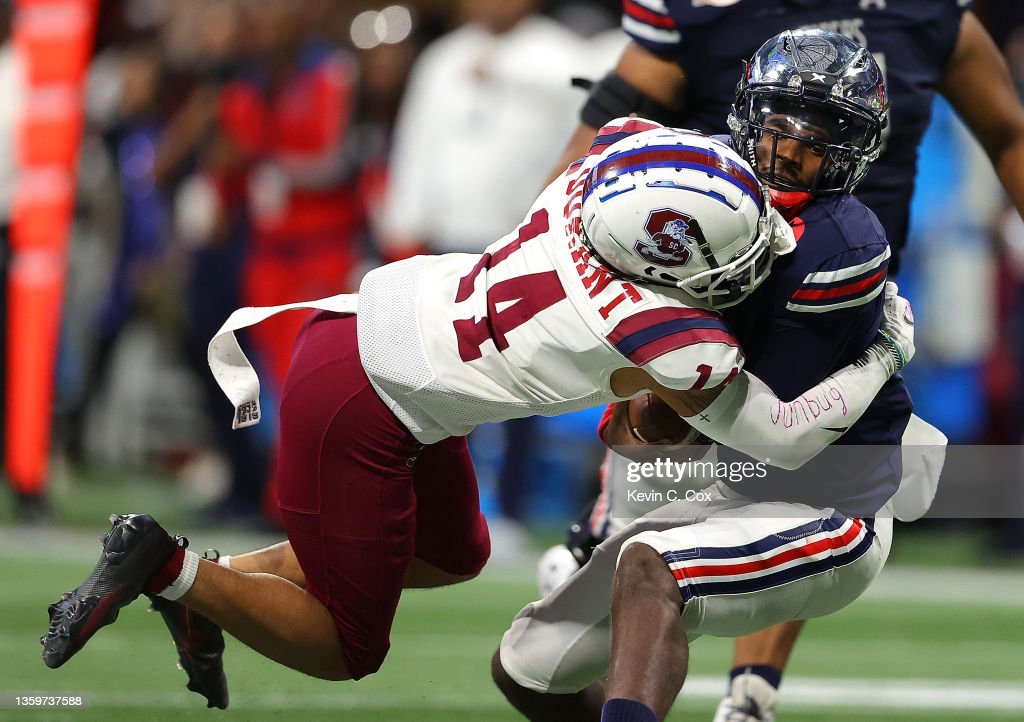 From now until the 2022 NFL Draft takes place, we hope to scout and create profiles for as many prospects as possible, examining their strengths, weaknesses, and what they can bring to an NFL franchise. These players could be potential top 10 picks, all the way down to Day 3 selections and priority undrafted free agents. Today, I’ll be profiling a defensive back prospect that showed out at the FCS level for a HBCU and now looks to transition to the league and prove doubters wrong knocking him for his size and level of competition.

— Has impressive speed (4.38 40) and burst for the position
— Does a great job breaking on the football on underneath throws, being able to click-and-close on the receiver to impact the pass or make the tackle shortly after the catch
— Does a great job jumping the route, playing through the receiver’s hands to either knock down the pass or get the pick
— Instinctive defender that recognizes route concepts and knows how to leverage himself in coverage
— Has good lateral change of direction skills and quickness to adjust in space when in coverage
— Has the long speed to stay sticky in coverage in all quadrants of the field
— Fluid mover in space when asked to commit to a backpedal or when needing to flip his hips in transition
— Scrapy defensive back that doesn’t shy away from contact as a tackler
— Will be physical at the catch point against receivers bigger than him, playing bigger than his listed size suggests
— Instincts and spatial awareness take him to the ball often, leading to INTs
— Gets his hands on plenty of footballs in the form of PBUs or INTs

— Lacks the ideal height and length you look for in an outside CB at the NFL level
— Arm length and height can lead to him getting big-bodied by larger receivers who box him out over the middle the field or on the jump ball
— Willing tackler, but may struggle to bring down larger, more powerful runners given his frame
— Size leads to struggles fighting off blocks on the outside against the run
— Occasionally takes risks trying to undercut the route to make a play, potentially leading to pass completions
— Has the skill set to move inside, but played very little in the slot at all during his college career

—Former high school quarterback who signed on to play defensive back at SC State due to his size
— Redshirted his first season on campus
— Made an impact in his first season as a starter in 2018 including two INTs
— Totaled 38 tackles as a redshirt sophomore along with a fumble recovery and three INTs
— Had his most impressive showing at taking the football away in 2020 by picking off four passes
— Finished his college career with 38 tackles (30 solo), one sack, 15 PBUs, and three INTs as a senior, bringing his career total to 12
— Recognized as the MEAC Defensive Player of the Year in 2021
— Second Team All-American in 2021, First Team All-American in 2020

Cobie Durant from South Carolina State is an interesting film study as a small-school guy who has been making a name for himself during the pre-draft process. He participated down at the Shrine Bowl where he had a productive week and then went onto Indianapolis for the NFL Combine where I had the opportunity to interview him as well as see him put together a great showing with his 40-yard dash and on-field work. Durant told me that he has been slept on his entire life dating back to when he wasn’t recruited as QB coming out of high school and transitioned to defensive back.

The move to the defensive side of the football proved to be a wise one for Durant’s pro prospects. His understanding of passing concepts comes into play as a cornerback, showing great instincts and spatial awareness when in coverage with receivers. Watch Durant at the bottom of the screen here carry the receiver vertically up the middle of the field on the inside release. He doesn’t make the play here, but Durant does a great job blanketing the receiver and staying sticky in coverage step-for-step.

Durant is an opportunistic corner that has a knack for playing the football while in the air. He had 15 PBUs in 2021 alone and finished his college career with 12 INTs. He does a good job with his click-and-close, breaking on the football with great burst and uses his closing speed to undercut the route like we see on this INT along the sideline.

Durant’s best game this season probably came against the toughest competition he faced in Death Valley against the Clemson Tigers. He finished the game with two INTs, showcasing stellar ball skills paired with the athleticism to cover receivers at a higher level effectively. Here is the first INT that is more of a gimmie as the ball gets batted into the air and Durant lays out to haul it in to convert the turnover.

The second INT is far more impressive as Durant picks up the receiver in off man coverage at the bottom of the screen and carries him down the sideline, not allowing him to stack him vertically thanks to his great deep speed (4.38 40). He tracks the ball in the air like a receiver and manages to snag the ball through his fingertips with outstretched hands, bringing in the deep ball for the INT.

While Durant is a good athlete in his own right who can run with some of the fastest receivers, he also is pretty physical for a defensive back. Despite being 180lb, he is a willing tackler that has no issue coming up in run support and sticking his face in the fan, chopping down running backs and receivers at their legs. Watch this play where Durant undercuts the receiver’s legs while the other defender flies in and jars the ball loose, forcing the turnover that SC State recovers.

Durant talked about how he embraces that underdog mentality as a player, not allowing the small-school status or lack of ideal size persuade him that he can’t make it big. He told me that he loves bringing physicality to his game, whether that is in run support or in coverage fighting for the football. We see another good example of Durant’s aggressive demeanor on this CB blitz where he comes free and blows up the QB in the backfield for the sack.

However, there are some weaknesses to point out from Durant’s game. His instincts and ball hawking nature help the defense produce turnovers, but he sometimes takes risks, keeping his eyes in the backfield too long anticipating the play and will allow completions because of it. Here is an example of Durant in the slot who keeps his eyes glued in the backfield as the receiver runs the corner route to the back of the end zone for the score.

While he understands route concepts and can stay sticky in coverage when tasked with covering receivers man-to-man, Durant can be inconsistent with his positioning, giving too much space for receivers to get off the LOS and into their route for easy completions like we see on this pitch-and-catch RPO pass to the receiver in the slot where Durant plays too far off his man, giving him the easy completion for the TD.

Durant’s biggest knock won’t be anything to do with his play, but rather his physical stature, being a short, lean cornerback that traditionally played a majority on the outside with some exposure to the slot. While he can compete with receivers in combative catch situations, he does lack the ideal size to prevent getting bodied in the red zone or on the jump ball, lacking the height and length to contest those passes routinely. He also is a willing tackler, but may struggle to take down bigger runners as well as hold up physically if asked to consistently play the run due to his slender frame.

When watching Durant’s tape, I couldn’t help but get Cortland Finnegan vibes from a comparison of size, length, play style, competitive demeanor, and physical limitations that both must overcome to be successful at the pro level. Finnegan also came from a small school in Samford and got passed by during the pre-draft process due to his size (5’9 7/8, 188lb) and the small-school label, not being selected until the seventh round. However, he too possessed exceptional athleticism for his size (4.34 40 at his Pro Day) and ended up starting a couple game in his rookie season before becoming a multiple year starter for the Titans and Rams, ultimately becoming a Pro Bowl and All-Pro selection in 2008.

This isn’t to say that Durant is destined to become a Pro Bowl-caliber player like Finnegan did, but rather that the similarities are eerily similar in terms of quick twitch and burst to cover receivers all over the field and utilize their instincts to make plays on the football. Both are competitive at the catch point and willing tacklers, even though they may not excel all the time against bigger receivers in the red zone or when a power back is meeting them along the sideline. Still, both are feisty competitors that were dinged for the lower-level competition and lack of ideal size but have the athletic tools and demeanor to kick inside and play well in the slot or potentially hold their own on the perimeter with good technique and positioning to make plays.

Durant told me at the NFL Combine that he looks up to guys like Darius Leonard and Javon Hargrave as former SC State products that successfully made that transition from his alma mater to the pros and that he aspires to be the next Bulldog to make a name for himself at the next level. Resident Steelers Depot CB expert Owen Straley told me Durant was one of the top guys at the position that stood out at the Shrine Game and given that Pittsburgh spoke with him at the Combine as well, there could be some interest in Durant as a mid-round investment who could kick inside in the pros while possibly playing some outside that could outplay his draft slot going forward.