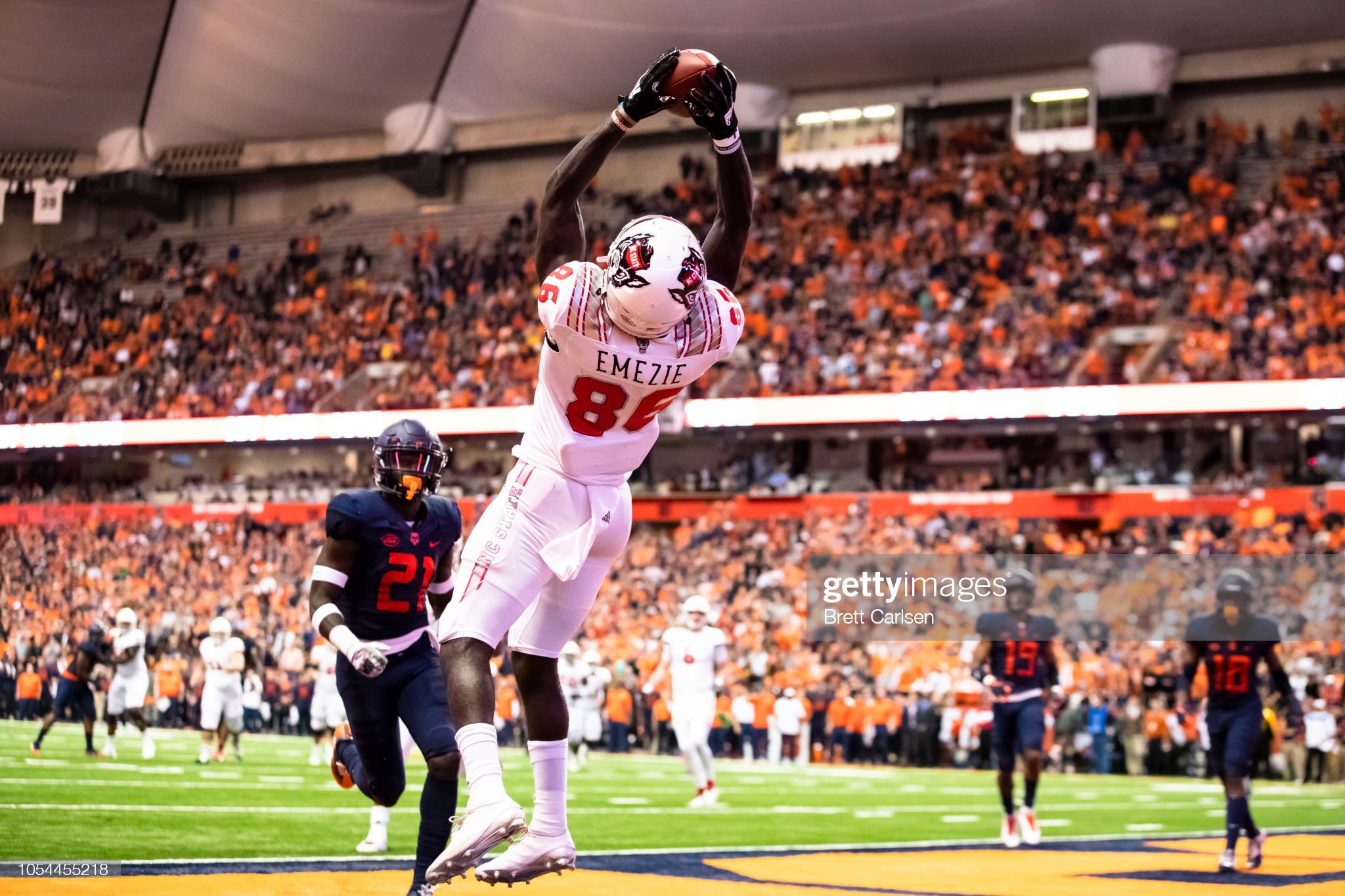 From now until the 2022 NFL Draft takes place, we hope to scout and create profiles for as many prospects as possible, examining their strengths, weaknesses, and what they can bring to an NFL franchise. These players could be potential top 10 picks, all the way down to Day 3 selections and priority undrafted free agents. Today, I’ll be profiling a wide receiver the Steelers should be familiar with for the ACC and the East-West Shrine Bowl in North Carolina State’s Emeka Emezie.

—Big, physical receiver with a wide catch radius
—Good overall body control to box out defenders, make plays on the football
—Physical weapon at the catch point overall; thrives in contested-catch situations, used often on jump-ball/back shoulder throws
—Flashed good wiggle and power after the catch to make plays with the football in his hands
—Sound overall ball skills, consistently plucks the football out of the air
—Knows how to create and utilize leverage in his routes; great feel for it overall
—Plays like a true alpha in the air; believes every ball thrown his way is his
—Strong blocker on the boundary that engulfs defenders and moves them off the spot

—Struggles to consistently create separation overall as a route runner despite technical strength as a route runner
—Won’t threaten defenses over the top with vertical speed; more of a build-up runner
—Lacks suddenness into and out of his breaks, allowing defenders to recover quickly at top of routes
—Got away with a lot of physicality at the top of his routes in college; very physical overall with clear pushoffs at times, could be called a lot in NFL
—Explosion off the line is missing, allowing guys to get hands on him, disrupting timing

—Four-year starter for North Carolina State that played in 57 career games for the Wolfpack over five seasons
—Hauled in 229 career passes for 2,985 yards and 19 touchdowns; set all-time career record for receptions at NC State
—Set a career-high for receptions in a single game with 14 against Clemson in 2021
—Second Team All-ACC in 2021; Honorable Mention All-ACC in 2020
—Named NC State’s Torry Holt Award Most Valuable Offensive Player of the Year in 2020
—Competed in the 2022 East-West Shrine Bowl in Las Vegas; former top 100 WR nationally by Rivals.com
—Both parents immigrated from Nigeria

For four seasons at North Carolina State, wide receiver Emeka Emezie played bully ball against some smaller, unsuspecting Atlantic Coast Conference cornerbacks, putting up strong numbers each season on his way to setting the school’s all-time record for catches in a career, passing the likes of Torry Holt, Jerricho Cotchery and Jaylen Samuels in the process.

A deeper dive into the film on Emezie though shows he’s a receiver of a by-gone era in the NFL, one that relies heavily on contested catches and playing through contact to fight for the football, rather than being able to consistently create separation. In today’s NFL, I tend to stay away from those receivers that are more physical and win contested catches in the NFL but can’t separate, and that’s where Emezie falls for me.

That said, he does bring impressive physicality to the position and could really carve out a role at the next level as that possession style receiver that can win at times downfield due to his strength and body control in the air, ideally in a West Coast-style offense where he can be that possession receiver and win along the sideline, moving the chains.

Against Pittsburgh in 2020, Emezie showed exactly what he can be, especially in the red zone. Though he got away with a number of push offs throughout the game, he flashed the high-level body control and the ability to win on back-shoulder throws, including this one here against future NFL corner Jason Pinnock to win the game for the Wolfpack.

Bottom of the screen, you can see he’s not overly explosive off the ball and won’t challenge defenses vertically. That said, the back-shoulder throw is nearly impossible to defend. Quarterbacks know that and when they have a receiver with high-level body control and can contort this way to get around and catch the football, they’re going to go to it often. That’s just a phenomenal job by Emezie to hide the subtle push off, get his body around and get both feet down for the score.

Earlier in the game against the Panthers, Emezie showed how good he can be in the air. Obviously this is a clear push off that goes uncalled, but you can see the mentality Emezie has in the air, carrying that alpha mentality anytime the ball is in the air in his vicinity. He’s not going to win vertically and create separation very often, but he’s bigger and stronger than most defensive backs and can play bully ball in the air, high-pointing the football  for the score.

While he’s not a guy that will create separation on his routes, he is a technical route runner overall, one that can sell certain routes and get cornerbacks to bite, allowing him to win in a big way at times. This is arguably the best route he ran in his career at NC State, beating the Syracuse defensive back by showing an outside break with a head fake before bursting back inside on the post route, crossing the defensive back up leading to the explosive play touchdown. The ability to win downfield in present in his game, but he’s just not a guy that I’d profile as a home run guy. He’s more like Chase Claypool in that he works downfield a lot but doesn’t create much separation, except he can win in the air at the moment.

Where I do like Emezie is as that possession receiver in today’s NFL, one that is very hard to tackle after the catch due to his power with the football in his hands. This rep against Louisville really opened my eyes as to what he can do after the catch. Beating two defenders like this in such a small area is really impressive.

He has the lower body strength to rip through would-be tacklers and has a little bit of wiggle to his game, though it’s nothing to truly bank on in space.

Throughout his time in college, Emezie often made the first person miss after the catch by often winning with his first step after the football is in his hands. Here against Florida State in 2020, he did just that, breaking back inside after the catch, causing the defensive back to miss in space. From there, Emezie showed off some impressive short-area wiggle with the impressive stop-start in space.

He really was able to stop on a dime and leave nine cents change her to make the defensive back miss before getting into the end zone.

Overall, Emezie profiles as a No. 4/5 wide receiver on a roster, one that can win in the red zone due to his strength at the catch point and the ability to contort himself on back-shoulder throws, which should make him a key guy between the 20s in the right offense. He’s not going to blow anyone away with his testing numbers as he’s not much of a quick-twitch athlete overall.

He’s a receiver that is seemingly an era too late, one that thrives on contested catches and dominating in the air instead of separating and creating space overall within his routes. There’s still a place in the game today for a receiver like Emezie, though it’s a limited one. He’ll have to find a way to create some separation in the NFL to truly stick overall though he can provide some special teams value in coverage due to his physicallity overall.

Emezie reminds me a lot of his former NC State teammate, Kelvin Harmon. He’s not going to test overly well, won’t blow anyone away with his athleticism overall, but all he did was produce when on the field in college, much like Harmon did as a rookie in Washington before hurting his knee.