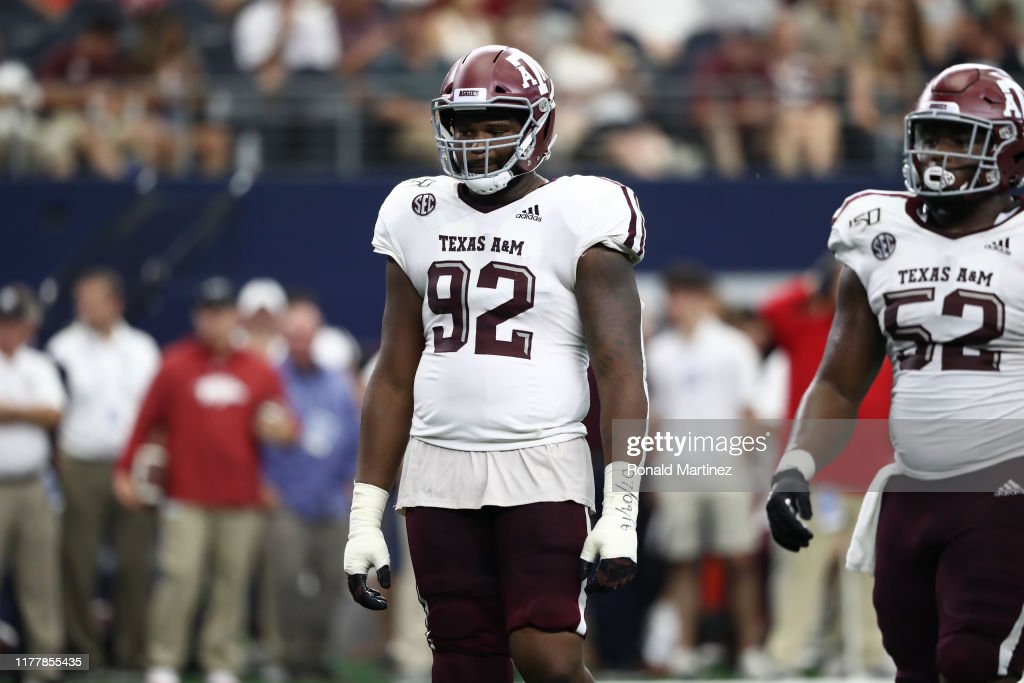 From now until the 2022 NFL Draft takes place, we hope to scout and create profiles for as many prospects as possible, examining their strengths, weaknesses, and what they can bring to an NFL franchise. These players could be potential top 10 picks, all the way down to Day 3 selections and priority undrafted free agents. Today, I’ll be profiling Texas A&M DT Jayden Peevy.

— Great size, ideal frame along the defensive line with rare length (35 1/2 inch arms) and wingspan (85 3/8 inches)
— Strong run stuffer, stout at the point of attack and tough to move
— Able to handle and absorb double-teams, needs to consistently keep pads down and square but a powerful lower half whose able to fill his gap
— Shows ability to split double-teams and work upfield to disrupt in the backfield
— Stacks and sheds in the run game, uses length to create space between him and blocker and finds the ball
— Heavy hands and punch on contact to stun and control blockers
— Effective bullrush and able to run back guards into the pocket
— Willing to chase ball laterally but athleticism limits his effectiveness
— Uses length to get his hand up in throwing lanes, batted down several passes, especially his senior year
— Length/size also made him effective field goal blocker
— Played in NFL system, three-down front that asked him to twist and stunt
— Experience playing up and down the line
— Good starting experience

— Below average to poor athlete in testing and in tape
— Needs to show more consistent get-off
— Limited pass rush juice who was taken off the field in passing situations, doesn’t have many finesse moves and wins with power most of time (bull, occasional push/pull)
— Lacks balance and on the ground too often, needs to show more coordination
— Needs to consistently keep shoulders square, will get washed down the line when he turns to try and flow
— Gets hands knocked down as a pass rusher too often and unable to recover in the rush
— Has size to play over tackles but may lack ideal athleticism
— Some projection over his game after significant weight loss during pre-draft process

We noted Steelers’ DL Karl Dunbar at Texas A&M’s Pro Day earlier this month. DeMarvin Leal is the top draw there but Peevy might be the real name to watch. When it comes to building out the perfect Steelers’ d-line build, it’s hard to draw it up better than Peevy. 6’5, 308 with 35+ inch arms. That is a perfect frame for a Steelers’ 4i/5 tech. It is worth noting Peevy said he played in the 330 range during the season so in the clips, you’ll see a bigger version of him.

Peevy is a solid run-stuffer who clogged the interior of the Aggies’ line. He was tough to move at the point of attack and even absorbed double-teams well. Overall, offensive linemen just couldn’t move Peevy and it’s one reason why Texas A&M had an impressive run defense, allowing just 3.65 YPC this season. Some examples.

Though not what he’s best at, Peevy was effective in being able to one-gap and get upfield when he showed good burst out of his stance. Watch him wreck the backfield against Colorado, one of the better games he played this year.

I like the system Peevy played in too. A&M’s system was similar to Pittsburgh, an often odd-front that had a lot of exotic twists and stunts. Like Isaiahh Loudermilk, Peevy is well-coached and should have an easier learning curve to odd fronts like the Steelers.

While limited as a pass rusher, he shows an effective bull rush to collapse the pocket. His moves outside of that are fairly limited and linemen figure him out quickly. Here, he won early in the game with a push/pull but wasn’t effective the rest of the game. This move, at least, looked nice.

Peevy needs to work on balance, coordination, and staying on his feet. He can plug the run but no one does it from the ground. And as a pass rusher, he gets his hands knocked down too easily, causing him to double-over and often go to the ground.

His athletic testing was also pretty poor even at a reduced weight. Peevy is not going to offer much as a pass rusher in the NFL, something that’s becoming an increasing “must” to last in this league. His overall upside is not incredibly high.

Still, it’s hard to knock a prototypical-sized defensive lineman who plays the run hard too much. While Peevy has said he played at 330 because coaches wanted him to stuff the run as a 1 tech, and he prefers playing more three tech, he’s best being that solid run stuffer. It doesn’t pay as well but will give him staying power in the league. I can certainly see the Steelers being interested in him on Day Three as a quality-depth add.

There are some concerns about his height as a zero/one tech but if he keeps his pad level down, he should do alright. My NFL comp to him is former Alabama DL Quinton Dial, a 5th round pick in 2013 who had 34 career starts but just 4.5 total sacks.