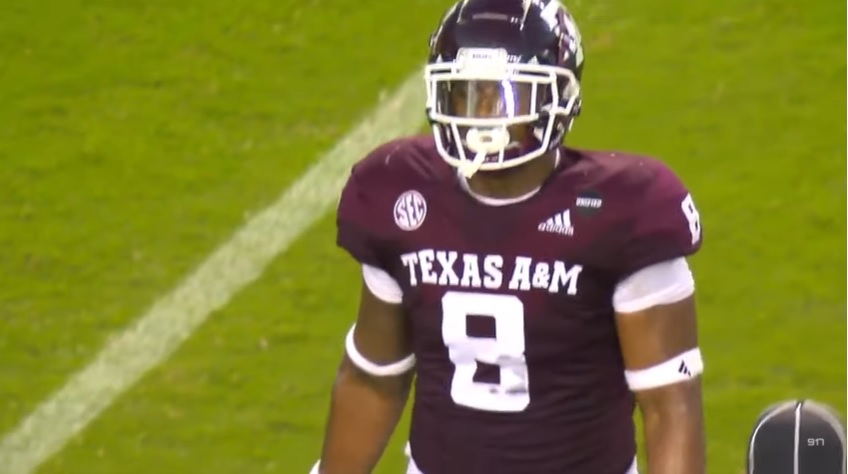 The Pittsburgh Steelers sent the house to Liberty today. But that wasn’t their only location on the scouting trail. We spotted Steelers’ DL coach Karl Dunbar at Texas A&M’s Tuesday workout.

The biggest D-line prospect working out today for the Aggies is DeMarvin Leal, an early Day 2 selection. Built well at nearly 6’4″, 283 pounds with long 33 1/4-inch arms, he ran a 5.00 40 at this year’s Combine. We profiled Leal earlier this month, with our Jonathan Heitritter writing:

“Leal’s ability to rush the passer and get penetration could interest the Pittsburgh Steelers, should they need a replacement for Stephon Tuitt if he decides to not comes back. However, his lack of size and strength on the inside that make him a potential liability against the run could deter Pittsburgh from heavily considering him early due to the fact they struggled so much against the run last season. There is no denying Leal’s athletic talent and his upside as a sub package rusher but continuing to get stronger and develop his body will determine whether he becomes a capable starter or a quality player on the defensive line.”

Heitritter ultimately slapped Leal with a second-round grade. That’s roughly where he’s projected to go. Though slightly shorter than the Steelers’ like in defensive ends coupled with the fact Leal would need to add a bit of weight for Pittsburgh’s system, he’s overall a good body type along the Steelers’ line. Finding the “perfect” 6’5″, 305-pound, 34-inch arm defensive lineman is a rarity, and one reason why the team made an aggressive move for Wisconsin’s Isaiahh Loudermilk last year.

Pittsburgh re-signed Montravius Adams and Tyson Alualu is returning for another season, likely his last in the league. But with Stephon Tuitt’s status still uncertain, the Steelers are open to adding at the position. Pittsburgh finished 32nd in run defense in 2021.

Leal isn’t the only prospect worth watching. There’s also EDGE Micheal Clemons (Dunbar has coached the EDGE rushers in previous years) who recorded seven sacks in 2021. However, he has off-field concerns after being arrested last August, so that may take him off the Steelers’ board. Other prospects include underrated safety Leon O’Neal and RB Isaiah Spiller.

Check out our full report on Leal below.