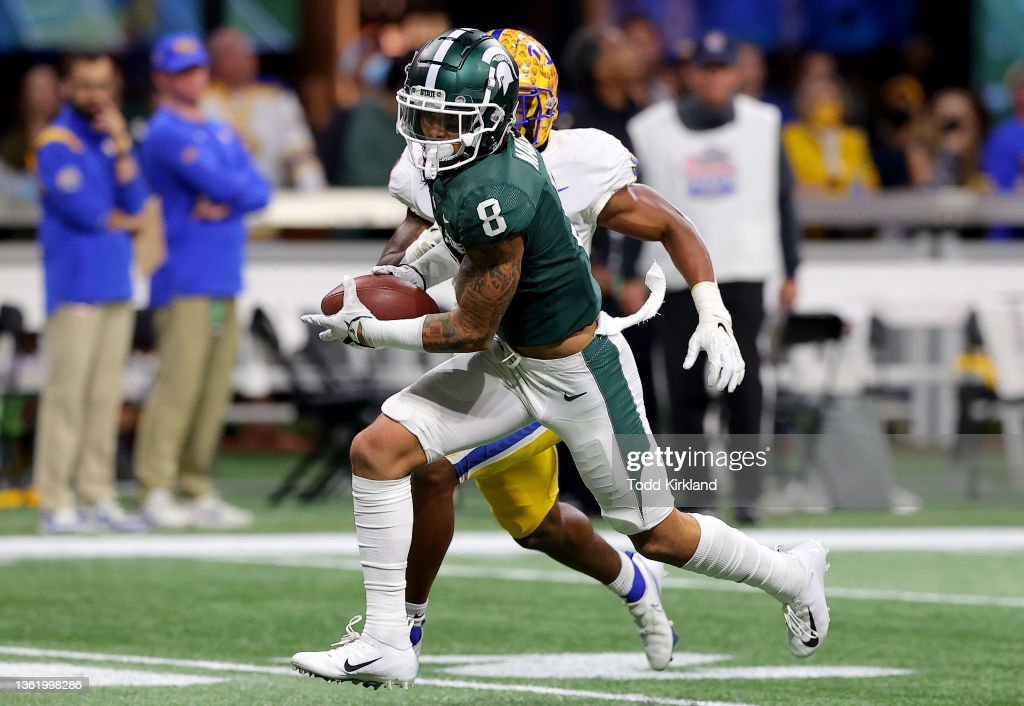 From now until the 2022 NFL Draft takes place, we hope to scout and create profiles for as many prospects as possible, examining their strengths, weaknesses, and what they can bring to an NFL franchise. These players could be potential top 10 picks, all the way down to Day 3 selections and priority undrafted free agents. Today I’ll be profiling a wide receiver that I believe is flying under the radar right now.

— Good release with quickness and hand usage
— Very good acceleration, gets up to speed quickly
— Improved route running on all levels
— Creates separation in a variety of ways
— Soft hands and ability to adjust around his frame
— Can create after the catch
— Wins consistently on deep routes
— Willing blocker, positions himself well
— Potential to play all three WR spots

In my search of players to profile I considered Jalen Nailor a couple times. Something was drawing me to him and I’m glad I finally took a look. He is a receiver who was used on both sides of the Spartan offensive alignment and was used throughout the route tree on all three levels.

As a pass receiver, he showed good acceleration against off coverage and can eat up space quickly. Against Press I didn’t see a lot of examples but he has good quickness and solid hand usage to combat the jam of the defender. I saw him create space in a variety of ways but quickness and acceleration at the top of the route was his best. He was also able to manipulate DB’s to turn their hips as well on deep routes and has plenty of speed to consistently stack cornerbacks. Against Zone coverage he showed solid awareness to find open spaces and give the quarterback a good target.

At Rutgers, at the bottom of the screen Nailor (8) uses quickness and a hand swipe with the inside hand to beat press and then he makes a nifty over the shoulder catch and creates after the catch.

Vs Michigan, at the bottom he doesn’t get the ball here but it’s a really nice route. He angles to the outside to get the DB to open his hips and then cuts back in to sell the deep route before dropping his hips and working back to the QB.

Vs Pittsburgh, at the top he uses an arm over and then a little shove to create space on this slant route.

Vs Pittsburgh, at the bottom of the screen he shows nice route execution to dip under the rub route and make the catch for the conversion.

Whether on the move or stationary he has good hands catching the ball away from his body. He displayed the ability to adjust to the ball well and can make the catch on less accurate throw. On deep throws he tracks the ball very well and is comfortable making over-the-shoulder receptions. After the catch he can make big plays. He has the field vision to find the space and speed and acceleration to make things happen. He will lower his shoulder to try to gain extra yardage when being tackled.

At Miami, he’ll take the swing screen and shows his acceleration getting up to speed quickly.

Vs Pittsburgh, from the bottom on a post route he makes a nice adjustment to make the one handed catch on a ball behind him.

He does a lot of little things that add to his game.  As a blocker, he is willing and positions himself well and makes the effort to block. Toughness was also shown willing to go over the middle and take a big hit. He did well to sell blocks and then good timing to release on screens and play action plays and get behind defenders.

Vs Miami, from the right edge his movement behind the line turns into a wham block that opens up a running lane for the back.

Vs Rutgers, at the bottom he will sell like he’s going to block before releasing up field for the easy score.

Vs Pittsburgh, he is lined up at the top on a fourth and five play. He runs the slant, reaches up for the catch and takes a shot but holds on.

Limited reps against Press coverage leaves me with a minor question mark on how successful he could be in the NFL. Using strength at the top of the route to create space was not commonly used. I saw some slips on his break on in-breaking routes and comeback routes and physical DB’s can knock him off his route. Contested catches was not a strong point for him and he has not had a lot of success breaking tackles. His arm length is below average. Injuries have cost him parts of three seasons and will be a concern.

Vs Pittsburgh, at the top he easily wins the route and yes the ball is underthrown but he had both hands on it.

Overall, Nailor is a receiver who played on the outside and ran the entire route tree. He is able to get separation with quickness and manipulation and has the speed to get over the top. As a target he has good hands, ability to adjust to the ball and can create after the catch. He tracks the deep ball well and is a willing blocker for teammates.

Areas to improve include consistent ability to beat Press coverage, adding some play strength and eliminating slips coming out of his breaks. Contested catches could use some work especially for someone who is such a good deep threat.

The injury issue is big one and must be taken into consideration. A team also needs to consider the Michigan State offense that had the quarterback always under pressure adding to his inaccuracy. His stats could have been much better. Draft lists out there for the most part have him listed at a late day three player. I don’t agree.

When healthy, and that is a big caveat, he has a day two skill set. He has all the tools to be a Z receiver but I think he can also play the slot right away. And with some fine tuning I wouldn’t be surprised to see him as an X. I am much higher on him than what I have seen from others. This draft is full of receivers and that may push him down a bit but the ability is there. For a comp, I’ll go with Amon Ra St. Brown who has very similar measurables with Nailor having better speed.

Games Watched: 2021: At Miami, vs Nebraska, At Rutgers, Vs Michigan, Vs Pittsburgh