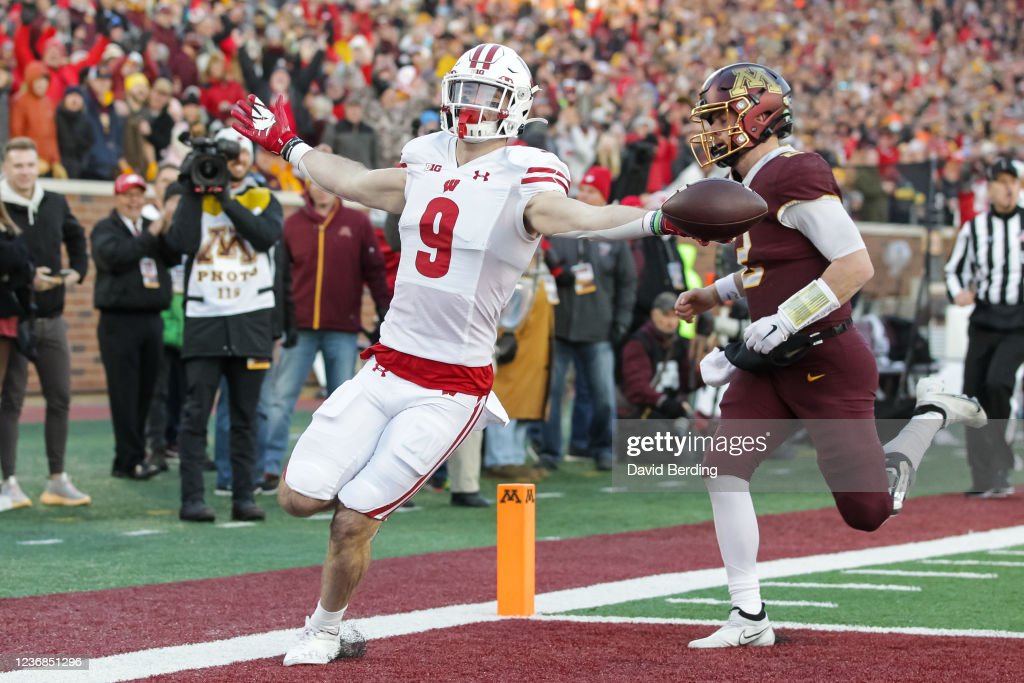 From now until the 2022 NFL Draft takes place, we hope to scout and create profiles for as many prospects as possible, examining their strengths, weaknesses, and what they can bring to an NFL franchise. These players could be potential top 10 picks, all the way down to Day 3 selections and priority undrafted free agents. Today, I’ll be profiling a safety prospect with good size and speed.

— Good size, speed and athleticism
— Has played single high, split, box and in the slot
— Good COD and gets downhill quickly
— Solid range when playing deep
— Solid Zone awareness and can close on routes quickly
— Can play Man on TE/RB
— Willing gap filler, takes on blocks
— Speed sideline to sideline and to chase the QB when blitzing

At his recent Pro Day, this fairly unknown defender turned some heads with his athleticism. He was used as the single high safety, as a split safety, in the box and in the slot. Wisconsin used a lot of Zone coverage but mixed in some Man as well. He played primarily on the right side and was always communicating pre-snap to indicate defensive calls and coverages.

Against the pass, as a deep safety he plays with good initial depth and reads the quarterbacks eyes to flow with the play. On underneath throws, he displays good change of direction and acceleration to get downhill quickly and will put a good hit on the receiver. He has solid range to get to the sidelines and is a good tackler in space. Playing in the underneath matchup Zone coverages he reads the routes coming into his area and has the athleticism to close on them quickly. He will play in the curl area from a linebacker alignment or in the flat rotating down.

At Rutgers, from the near safety position he uses his speed and puts himself in good position inside the receiver and reaches back on the underthrown ball to break up the pass.

Vs Nebraska, he moves with the motion man but recognizes the tight end leaking out and gets to the back of the end zone to break up the pass.

Here are a few clips of him in coverage making clean, quick tackles.

In Man coverage, whether heads up on the tight end or over the slot he looks comfortable in his back pedal with good change of direction to plant and run with tight ends or running backs on all three levels. He does a nice job to put himself in good position and get his eyes back to the quarterback. On deep routes by TE/RB he has plenty of speed and athleticism to stick with them downfield including wheel routes. On screens he shows solid awareness to read and react and was also used to blitz from the edge.

Vs Nebraska, on the right edge he doesn’t get the sack but you can see he speed and acceleration to get the pressure.

At Minnesota, split to the top with the TE he’s the recipient of a tipped ball that he takes for a touchdown.

Against the run, he was a willing participant to fill gaps and take on blocks with good hand placement and usage of hand chops to disengage. He processes well and can short gaps quickly and he pursued well from the backside and can close on the runner quickly. He flows to the ball well can hit the accelerator quickly to chase to the sidelines.

Vs Notre Dame, he works across the field with nice acceleration at the end to finish the play.

Vs Notre Dame, here are a couple plays of him making plays in the backfield.

Vs Michigan, from the deep safety he will come downhill about 20 yards to make a tackle for a loss.

When playing deep his route awareness is adequate and he will get caught getting looked off by the quarterback. When playing in Zone he doesn’t often jam receivers coming through his area. It would not be beneficial to have him cover wide receivers in the slot. His tackling was inconsistent ranging from wrap tackling to trying to tackle too high and lacking any pop. Didn’t have a lot of ball production playing primarily in Zone. Against the run, his angles to the outside were inconsistent and he was adequate working through traffic.

Vs Notre Dame, as the single high safety he follows the quarterback’s eyes to the outside and allows a receiver to get wide open over the middle. Luckily the receiver wasn’t targeted.

At Rutgers, he is in the slot at the top against a wide receiver and gets turned around on the deep route. He can handle TE’s out there but not WR’s.

Overall, Nelson is a player with good size and athleticism who has experience in Zone and Man coverages. He has played the single high safety, split safety, in the box and in the slot. The athleticism is there to play Man coverage on TE/RB and to blitz from inside the box. He’s a willing run defender to fill the gaps and take on blockers as well as the speed to chase down the ball.

Areas to improve include understanding and diagnosing or route combinations as well as not leaving his area open by following the quarterback’s eyes. Improving his physicality with receivers and getting more opportunities to break up throws. Also, his consistency when tackling including aiming point and angles could improve.

This is a hearts and smarts player the Steelers usually have an eye on. His speed, athleticism and experience in multiple coverages are a bonus. I wouldn’t want to use him consistently as a single high safety or in Man coverage on wide receivers but he could be moved around on the defense.

Best fit is as a strong safety but could play free safety as well. I wouldn’t expect him to start right away but he could in the future as well as be a core special teamer to start. Based on physical traits and measurements a good comp for him would be Morgan Burnett.

Games Watched: 2021 – vs Notre Dame, Vs Michigan, At Rutgers, vs Nebraska, At Minnesota