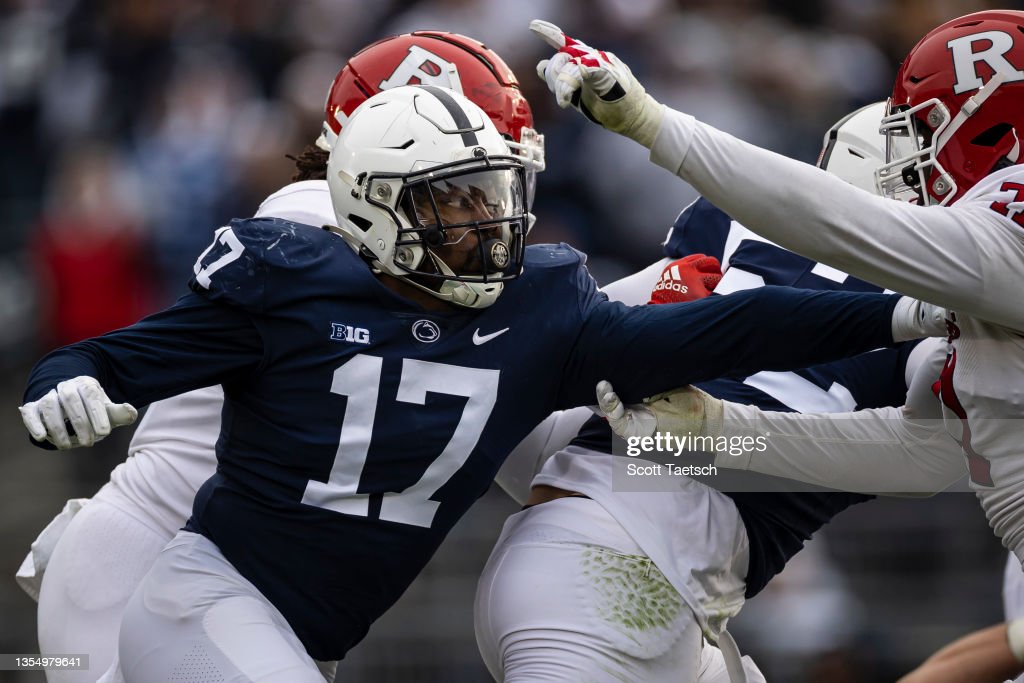 From now until the 2022 NFL Draft takes place, we hope to scout and create profiles for as many prospects as possible, examining their strengths, weaknesses, and what they can bring to an NFL franchise. These players could be potential top 10 picks, all the way down to Day 3 selections and priority undrafted free agents. Today, I’ll be profiling Penn State DE/EDGE Arnold Ebiketie.

— Good build with excellent length, especially for height, and carries weight well
— Rare bend and ability to turn the corner at the top of the arc, consistent threat around the edge
— Excellent hit and ankle flexibility, able to rip through contract effectively time and time again
— Uses length well to keep space from blocker, hand-fighter who plays with plenty of energy as a pass rusher
— Wins in a variety of ways as a pass rusher, has moves inside and outside to beat tackle’s set
— Dip/rip is most effective move but shows effective two-hand swipe to knock tackle’s hands down to win inside
— Flashes power when he shows proper technique and plays hard and physical overall
— Plus athlete, easy and fluid mover as a rusher and out in space
— Runs hard to the ball, plays with high effort and speed shows up chasing the ball sideline to sideline or behind him
— Uses length well in run-game to get off blocks, effective when able to aggressively shoot gaps and work upfield
— Good finisher with impressive hit power, ballcarriers feel his tackles
— Experience playing both sides of the ball and split time between hand-up and hand-down, looks comfortable overall
— Productive career and showed yearly improved, production spiked despite playing elevated competition in 2021, good numbers and performance against quality conference opponents

— Needs to show better and more consistent get-off, average to poor, and hurts himself by not being quicker off the ball
— Must improve power rushes, too easily stalled out when his feet and hands aren’t in-sync causing him to generate little power
— Prone to being washed against the run when two-gapping and playing more passive, controlling style, struggles to hold point of attack against combo blocks
— Lacks experience dropping into coverage, looked comfortable moving backwards in few clips observed but not a big part of his game
— Only one-career pass deflection, needs to use length to bat down throws in passing lanes
— Lacks much starting/playing experience, essentially a 1 1/2 year starter

Arnold Ebiketie might just be one of the most underrated names in the NFL draft when it comes to media attention. In a strong pass rush close with big names at the top like Aidan Hutchinson and Kayvon Thibodeaux going in the top ten. Ebiketie may not quite but at that level but he displayed consistently impressive tape.

The #1 thing about his game is his bend. That’s critical as a pass rusher. If you can corner and win the edge, you’ll get paid in the NFL because you’ll get sacks and pressure. Ebiketie has great lean and flexibiilty to consistently win the edge and he rarely got pushed upfield. Here’s my favorite example ?

And here’s a cut-up of them.

But he isn’t a one-trick pony and can win in different ways. He’s able to beat tackles to the inside too with an effective two-handed swipe to knock the tackle’s hands downs and cross his face.


Ebiketie is a smooth, fluid athlete who runs well in space and shows his speed chasing the ball. He also displays good effort and hustle, like helping to save a touchdown against Iowa this year.

Certainly, his body type has changed. He exited high school at just 205 pounds and is entering the NFL at 250. He transferred to Penn State for 2021 and was able to play right away without having to sit out for a year. He broke out for his best season and popped in big games against quality opponents like (3.5 TFL, 1 sack vs #3 Iowa, 2 sacks against #9 Michigan, 2 TFL, 1 sack against #12 Wisconsin). He’s ascending at the right time.

Now, his game still has work to do. He’s inconsistent against the run and is more prone to getting knocked around against 12 personnel/heavier packages and when he’s unable to two-gap. He can be aggressive and get in the backfield but he can also get washed by combo blocks when he’s not setting the edge or shooting into the B/C gap.

His technique also needs work. His speed to bull rush isn’t always synched up and he’ll punch when he’s not pushing off with his outside foot. But the biggest thing he has to work on is his get-off. Despite being an effective pass rusher, he’s not quick enough off the line of scrimmage. At best, it’s average and at worst, he’s just flat-out late. He’ll need to be quicker because all the bend in the world won’t help enough against NFL tackles.

Watch him as the RDE below be the last lineman off the ball.

Despite those issues, they are fixable and Ebiketie’s game is still growing. He isn’t a finished product. His bend matches up his ultra-impressive 6.95 three cone and he has similar measurables to TJ Watt (6’4, 252, 33 inch arms, 37 inch vert, 10’8″ broad, 6.79 three cone). This is a quality, underrated prospect who may be hidden because he played just one year at Penn State and frankly, didn’t see the field a lot prior to that. I’m banking on his athleticism and the tape and believe he can become an impact rusher at the NFL level. My NFL comp to him is Harold Landry and Ebiketie doesn’t have the medical concerns Landry did that caused him to drop some in the 2018 draft.