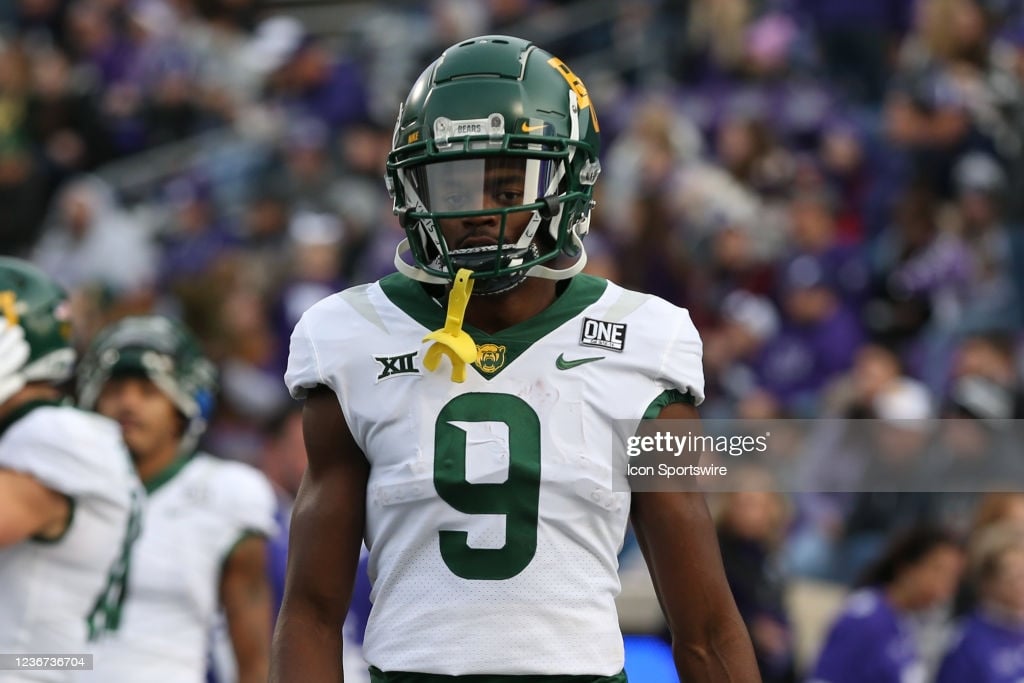 From now until the 2022 NFL Draft takes place, we hope to scout and create profiles for as many prospects as possible, examining their strengths, weaknesses, and what they can bring to an NFL franchise. These players could be potential top 10 picks, all the way down to Day 3 selections and priority undrafted free agents. Today, I’ll be profiling a wide receiver prospect who is starting to generate some serious buzz post-Combine, that being Baylor’s Tyquan Thornton.

—Elite-level speed for the position to take the top off of a defense
—Wide catch radius overall, natural hands catcher; powerful hands to pluck the football out of the air
—Really impressive burst with the football in his hands; has a legit second gear
—Tracks deep ball very well without losing speed
—Sounds route runner overall with varied releases off the line of scrimmage
—Long strider overall, glides on the field
—Willing blocker that uses long limbs to gain control of defender in space
—Creates easy separation on routes due to quickness and play speed

—Rail thin frame overall and dealt with injury issues in college
—Exceptionally small hands overall for the position, which could scare away some teams
—Limited route tree overall coming out of spread system; ran mostly flys, stops and slants

—Lateral releases off the line of scrimmage lack explosion, won’t chew up much ground with them
—Tends to struggle with physical corners that get hands on him at the line of scrimmage
—Needs to develop a bit more functional strength overall
—Labors to sink hips on in-breaking routes, allowing corners to recover and get back into phase
—Will struggle at next level in contested catch situations

During a year in which speed is pretty prevalent at the skill positions in the 2022 NFL Draft class, Baylor senior wide receiver Tyquan Thornton is the fastest, yet somehow continues to fly under the radar overall.

Coming out of the Big 12 and a program like Baylor loaded with offensive talent can do that to a guy, but sleep on Thornton at your own risk.

As a senior with the Bears, Thornton hauled in a career-high 62 receptions for 948 yards and 10 touchdowns, bursting onto the scene, earning a trip to the 2022 East-West Shrine Bowl in Las Vegas, where I was able to get an up close and personal look at the Baylor star after colleague Dr. Melanie Friedlander unearthed him in the process leading up to the showcase.

In Las Vegas, Thornton showed exactly what he put on tape throughout the season for the Bears, winning seemingly every single rep against some talented defensive backs, consistently finding himself open throughout the week, before then going on to turn heads in Indianapolis at the 2022 NFL Scouting Combine, clocking a 4.28 official 40 time.

The speed is pretty evident on tape, whether it’s working deep downfield or making a splash play after the catch with the football in his hands. When he opens it up he truly has a second gear to his game.

He glides on the football field, making it look so easy overall. Look how he quickly pulls away from the West Virginia defenders, who shut it down rather quickly knowing they have no shot of running down the track star.

Teams started to defend him much differently after his strong start to the season, rotating help his way over the top, which did give him some issues. While he has legitimate home run speed, I noticed that he struggled to stack some corners down the stretch, which could be a problem in the NFL. That said, he has really sound body control, a great feel for where he is on the field, and made some tough contested catches overall.

You can see here he struggles to get on top of and stack the Iowa State cornerback, leading to a contested catch situation. He does a nice job getting square to the throw though, boxing out the cornerback to tap his feet in the end zone for the score. This is one area I have concern with him though. His lateral releases are a bit slow and unexplosive, which doesn’t match the true athlete he is.

Here again, this time in the Big 12 championship game against Oklahoma State, Thornton struggles to stack and win cleanly vertically. However, he shows off tremendous hands and body control to make this outstanding catch for the touchdown, playing through contact in the process. I’d like to see him add a big more functional strength to his game overall to deal with more physical corners at the next level, but he is maxed out physically.

This is a tremendous release from Thornton, who shakes the Oklahoma cornerback almost immediately off the line — and cleanly too — for the touchdown. You can see the short-area burst and athleticism here from Thornton, so it’s definitely part of his game. He just needs to develop it more.

While it was rare to see Thornton play through contact in the Big 12, he had to fight through some stuff against Oklahoma last season and really stood tall. This route showed he can work through some initial contact and isn’t afraid to go over the middle, though I would not ask him to do that a ton in the NFL, largely due to his overall build.

Though he is a true home run threat that defenses have to be worried about taking the top off, Thornton really needs to develop his ability to sink his hips into his breaks, allowing him to snap off routes like quick stops to really eat up defenses that are playing too deep on him. He showed the ability against Texas in 2021, but you can see it’s a bit slow at the top of his route as his stab with his left foot is a bit elongated overall. He does a nice job whipping his head around to find the football and move the chains, but he can definitely improve in this area at the next level once he develops more of a full route tree.

Overall, I really think Thornton is a sleeper in this class. I was a bit concerned with his initial hand size measurement in Las Vegas, but they’re just that: measurements. They don’t hinder his ability to play football at a high level whatsoever. Add in the speed element and the clear progression in his game (a 37.5% dominator rating, 76th percentile) and some very impressive testing numbers overall, it’s hard not to like Thornton on Day 3 in a deep wide receiver class.

He profiles as a developmental Z in a vertical offense, one that loves to take shots downfield and play with speed overall. That said, I do think he could develop nicely into a sound route runner overall, much in the same vain as Robby Anderson, becoming a true No. 2 wide receiver in the NFL for a decade. I do have concerns about his frame and build and how that will handle the rigors of the NFL after having health with some injuries in college, but in a loaded offense at Baylor last season, he was the true top dog overall. That means something.