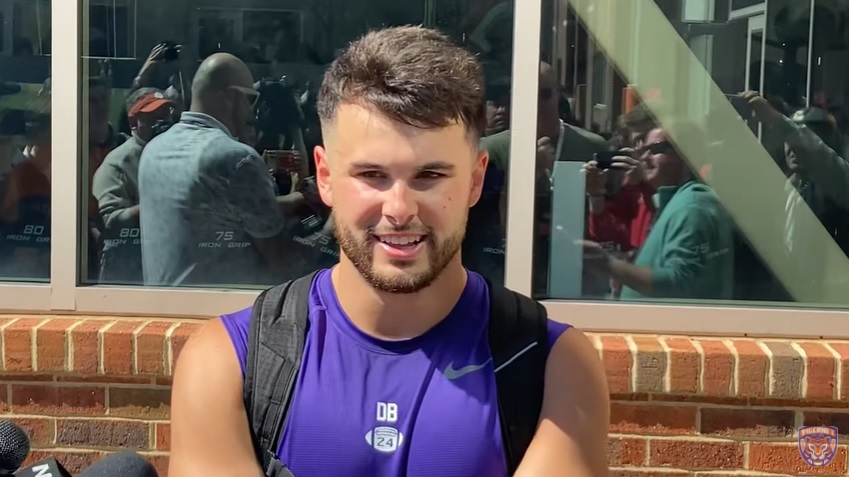 From now until the 2022 NFL Draft takes place, we hope to scout and create profiles for as many prospects as possible, examining their strengths, weaknesses, and what they can bring to an NFL franchise. These players could be potential top 10 picks, all the way down to Day 3 selections and priority undrafted free agents. Today, I’ll be profiling Clemson S Nolan Turner.

All Numbers From Pro Day

— Good athlete who moves well in space, excellent timed speed
— Plays hard and runs to the football, shows good effort, displays physicality and good hit power
— Takes good angles to the football
— Shows ability to finish and looks to take the ball away
— Explosive out of his pedal and rallies downhill
— Willing to take on and matchup against bigger defenders in run and pass game
— Versatile defender who aligned all over the defense
— Decent starting experience and great overall experience against Power 5 competition
— Durable and available
— Leader and captain, overlooked player since high school who plays with chip on his shoulder

— Small frame and lacks much length or bulk, narrow chest and upper body with short wingspan
— Falls off ballcarriers too often and easily, causing him to miss too many tackles
— Gets pushed around and caught up in the wash in the run game
— Looks a bit tall and high in his pedal
— Lacks elite or standout trait
— Didn’t make a lot of plays in coverage and will lose out to bigger players
— Game looks maxed out and upside appears limited
— Much older prospect than preferred
— Production waned senior season

Nolan Turner is one of a couple of safeties the Steelers have brought in for pre-draft visits. Like Virginia’s Joey Blount, Turner’s impressive Pro Day workout likely drew a second and longer look. Turner has played as much college ball as basically anyone in this class. Only 25 starts by 65 total games is a rare number.

On tape, Turner is a high-energy player with explosion coming out of his break and the ability to thump against the run. He attacks the ball well and takes good angles to the football. Against Pitt, he drives on this in-breaking route and rips the ball out for the forced fumble.

He played in a solid system under DC Brett Venables and has attractive NFL bloodlines too with his late father carving out a great pro football career. His character and leadership seem to be easy, positive questions to answer, too, and he’ll compete well at the bottom of the roster.

Though his listed size isn’t small, Turner looks smaller on tape. His slender upper body is demonstrated by his poor wingspan and his lack of bulk causes him to fall off of tackles too often. Several examples.

And I just struggled to see an exciting part of his game. He flies in downhill, he wants to be physical, but he misses too often and gets knocked around the LOS. In coverage, it looked about average and he doesn’t possess any sort of great coverage ability.

He’s tough and played through injury but was more limited his senior season. Maybe good health will improve his tape. Turner is plucky with the demeanor and athleticism to project as a competent and effective special teamer but I don’t see his ceiling, especially at almost 25 years old, as anything beyond that. My NFL comp is Armani Watts. Turner is a bit more athletic but will have a similar career arc as mostly a special teamer.