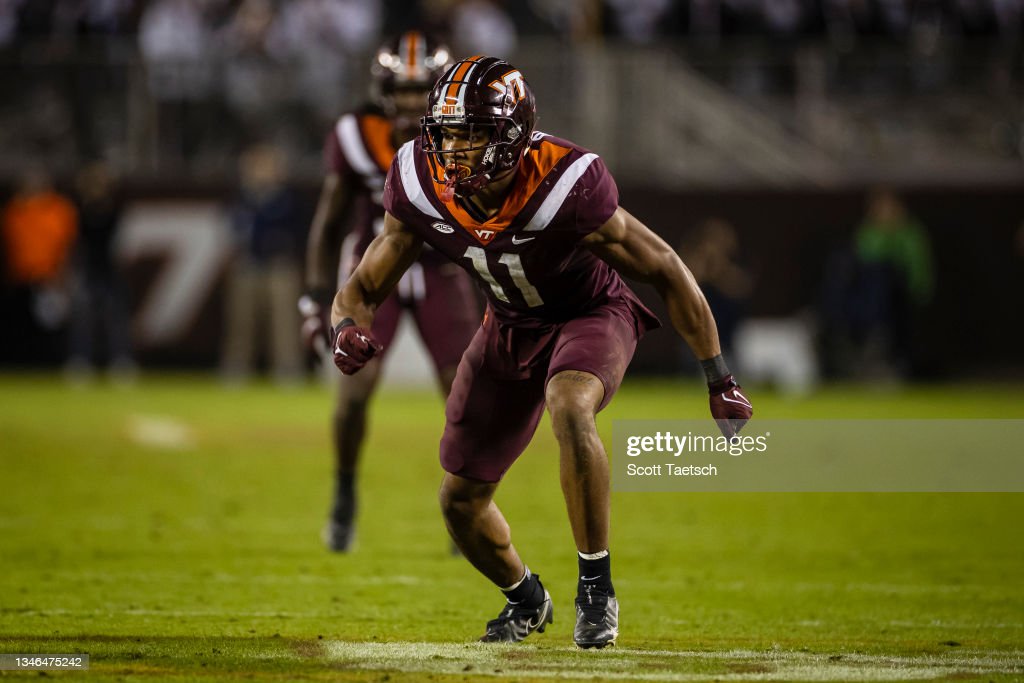 From now until the 2022 NFL Draft takes place, we hope to scout and create profiles for as many prospects as possible, examining their strengths, weaknesses, and what they can bring to an NFL franchise. These players could be potential top 10 picks, all the way down to Day 3 selections and priority undrafted free agents. Today, I’ll be profiling Virginia Tech EDGE Amare Barno.

— Majority of pass rushing snaps stall out
— Straight line speed doesn’t equate to a burst off the line at the snap
— Pass rush moves are limited – wants to use pure power
— Swim move allows blockers to knock him off balance
— Spin move is very slow developing
— Tendency to get washed out of the play on run plays in both A & B gaps
— Doesn’t appear to have natural coverage skills
— Limited college experience – less than 1,000 snaps at Virginia Tech

Barno is certainly an athlete and someone that QB’s and ball carriers are aware of at the snap.  His huge frame is easy to notice, and his play resembles that of a hunter who stalks his prey.  In the pocket, QB’s aren’t nearly as threatened compared to when they look to roll or scramble as Barno will lock on like a heat seeking missile to end the play.  Ball carriers on stretch designed runs and plays outside the tackles must be a little leery of their success if Barno is hovering down the line, as he will wrap-up with his long reach.  His long arms also benefit him on diving tackle attempts to trip-up a runner.

As an EDGE rusher though, the pass rushing skills are lacking.  Many of his attempts simply stall out.  Barno can use his long arms effectively at the initial pass rush attempt but has rare success with secondary moves.  Most of the time it doesn’t appear as if he attempts a secondary or counter move.  On the occasions when he does beat a blocker, it looks more surprising than routine.

Here’s an example of a nice play where Barno beats the RT while slapping away his hands to create a pressure.

There are also times where he can push the blocker backwards to knock them off balance, but more times than not it becomes stalled out due to no secondary pass rushing moves.

Make no mistake though he is a playmaker, but more in the form of awaiting the decision of the passer and/or ball carrier, as he does here while filling a spy role.

Hunting ball carriers and QB’s once they decide to take off and run seems to be his forte currently as he’s able to shed a block on this snap and make a stop.

On designed run plays such as the one below, most seem to have very little success as Barno is able to shed a couple of blocks and halt the running backs chance of beating him to the sideline.

Potential is going to most likely define him as a prospect in draft rooms.  He offers many positive traits but if he’s going to be relied on as an EDGE rusher in the NFL, development is key.  If a situational spy or scheme heavy spy usage is a huge need for an NFL team, then Barno is the person for the role.  He’s going to hunt and eliminate running threats from the pocket if he’s playing at the line of scrimmage and a little beyond.  Sideline to sideline speed is there as his blazing 40 time at the combine validates, but it’s not necessarily used for coverage purposes, at least it wasn’t at the college level.  His coverage skills are more so just taking away the flats and nothing truly at the second level.  Off the ball LB snaps were very limited at Virginia Tech with 48 total over the past two seasons so if a team is looking to make that transition for Barno then it’s going to take some time.

As an EDGE rusher only, Barno reminds me a little of Lorenzo Carter – former third round pick of the NY Giants and now with the Falcons.  Frame, stance, length and speed all mirror one another.  In going back to watch games in how the Giants also used Carter against mobile QB’s such as Jalen Hurts of the Eagles, some similarities are offered as well.  Carter was much more polished coming out of Georgia though in terms of playing from the box and in coverage.