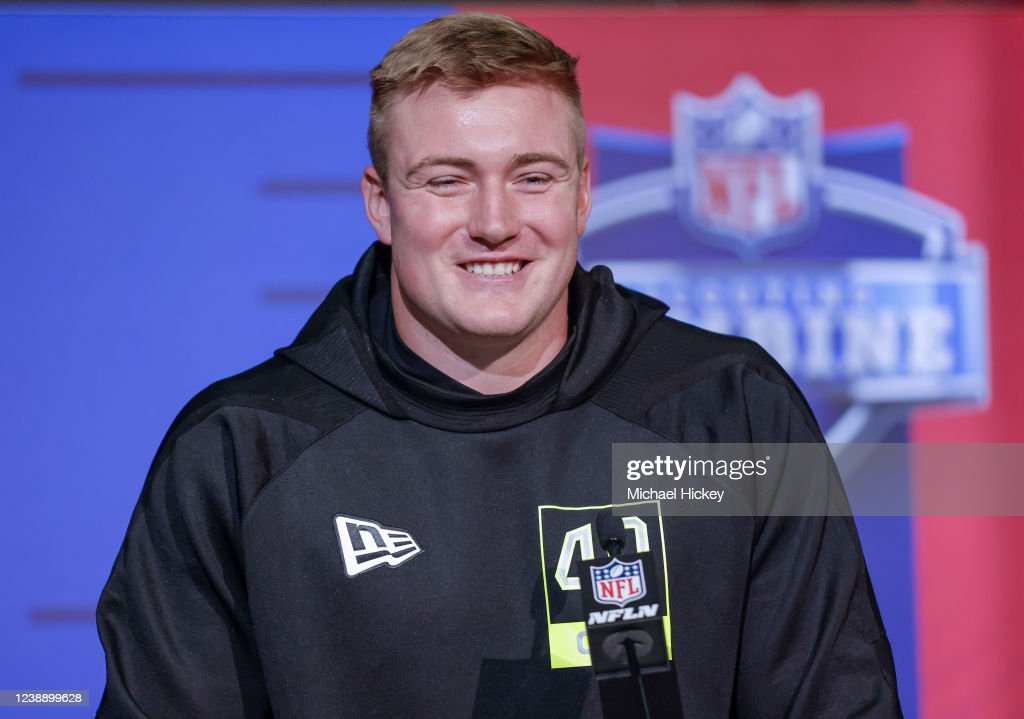 From now until the 2022 NFL Draft takes place, we hope to scout and create profiles for as many prospects as possible, examining their strengths, weaknesses, and what they can bring to an NFL franchise. These players could be potential top 10 picks, all the way down to Day 3 selections and priority undrafted free agents. Today, I’ll be profiling an offensive tackle prospect that comes from a Group of Five school but has been heavily touted by scouts and the mainstream media like as one of the best OT prospects in this draft class.

— Still extremely raw when it comes to the finite details of the position
— Needs to continue to add functional mass and play strength to hold up against NFL-caliber defenders
— Telegraphs his pass sets to his competition, being susceptible to initial move or counters
— Tends to lunge forward and lean into his blocks when he punches
— Needs to punch through the defenders outside shoulder with a stronger punch from his outside arm to stall the rusher’s progress
— Can have a nastier demeanor when it comes to his presence in the run game
— Feet and base can get narrow, limiting ability to generate a forward push as a run blocker
— Can occasionally get high and lose his anchor, leading to him losing to power on the edge

— Senior prospect from Steinbrunn, Austria
— September 23, 1997 (age 24)
— began playing American football at the age of 14 for the Vienna Vikings
— Foreign exchange student from Austria who transferred to Delton Kellogg High School in Michigan as a junior and lettered in wrestling and track and field
— Returned to Austria after the year and completed his compulsory service in the Austrian Military after graduating from Ballsportgymnasium Wien
— Moved to the US and started out at TE for Central Michigan where he played in all 12 games, starting four in 2018 and recorded 10 catches for 88 yards
— Played in all 14 games with seven starts in 2019 where he caught 10 passes for 76 yards
— Was moved to the offensive tackle position after his sophomore year and started all six of the Chippewas’ games six games during its COVID-19-shortened 2020 season
— Was nominated as a first-team All-MAC selection in 2021 after starting 13 games at LT
— Pro Football Focus named Raimann their Offensive Player of the Year for the MAC in 2021
— Earned Academic All-MAC honors in 2019 and 2020

Bernhard Raimann of Central Michigan has had quite the journey thus far in terms of a football life. The offensive line prospect was born in Austria and started playing American football there in his youth before deciding to enter the foreign exchange program in the States to garner more looks at a potential college scholarship. He ended up earning a scholarship with the Chippewas as a tight end where he spent his first two seasons before getting moved to the offensive line to play tackle. Since then, Raimann has added a considerable amount of size to his long, athletic frame and has been recognized as one of the better performers at the LT spot in FBS football.

When you watch Raimann on tape, you understand the intrigue and interest in such a raw prospect. Despite being new to the position and still growing into himself as a player, Raimann has plenty of strong qualities you look for in an offensive tackle prospect. He is a good athlete and can work to the second level and out in space in the run game like we see on this rep against Missouri, climbing to the MIKE LB and turns him away from the play side, allowing the runner to go off his backside as he seals the defender away from the play. His hand position could be better, but still an effective block.

Raimann does a good job looking for work as a run blocker and makes an honest effort to put a body on a man. Here in the same game, we see him work downhill on the zone read play, locating the LB near the LOS and buries him into the turf for the pancake block to spring the back into the second level of the defense.

Raimann is still growing into his body, having moved from playing TE only two years ago, and thus still needs to add more functional size and strength to produce a stronger push in the run game. Still, he plays with high effort and continues to run his feet on contact like on this rep against LSU where Raimann makes the reach block on the defensive lineman, turning his shoulders while continually running his legs to get the reach block to seal off the defender’s path of pursuit to the ball carrier who makes one man miss and rips off a nice gain on first down.

Raimann is still raw when it comes to the nuances of the position including punch and hand placement, thus leading to him having to recover should his initial punch fail. However, much like in the run blocking department, he has the athleticism and effort to save plays even when they initially don’t go his way. Here is a good example where Raimann doesn’t land his punch initially on the pass set and the defender starts to get the corner, but Raimann manages to make the edge rusher run the arc, allowing the QB to set up in the pocket and locate his check down option.

Here’s another example from the same game where Raimann manages to ride the pass rusher up the arc of the pocket to give the QB a clean pocket to deliver a TD strike down the field.

Still, Raimann plays with a fair amount of awareness for the position, being able to pick up on games being played upfront by the defensive line and properly execute against stunts and twists. Here is one good example versus the Tigers where Raimann catches the DE crashing in and then passes him off to the LG to pick up the DT looping around, sealing him off before he can get around and into the pocket.

Raimann plays with a strong grip as a pass protector, latching onto the defender’s pads and has the lateral mobility to shuffle with him side-to-side to mirror the rush. Despite having a shade under 33” arms, Raimann does a good job getting hands on and maintaining his pass set for the length of the play like we see on this pass rush attempt where the defender attempts to counter back inside, but Raimann redirects, keeping his hands inside and works his feet laterally to stall the rush.

While being on the lighter side of things, Raimann has a basic understand on how to absorb power as a pass blocker and anchor in against the rush when he has good hip and knee bend. We watch this rep against the Tigers where the edge rusher initially drives Raimann back after he is slow to land his punch, but after the initial drive back, Raimann manages to dig his feet into the ground and neutralize the rush altogether, allowing the QB to complete the downfield pass.

However, Raimann still has a lot of work that needs to be done to reach his ceiling and become a consistent NFL starter. His hand placement can be erratic at times, and he will occasionally lose his base when he leans forward into blocks or gets a little too upright which results in him getting walked back by power rushers. We see both instances happen here on this rep where Raimann grabs outside of the shoulder pads and gets stood up by the pass rusher who lands his hands inside Raimann’s chest, proceeding to walk him back into the QB’s lap and eventually shed off the block to make the play.

Here is an example against Western Michigan where Raimann jumps out of his pass set, but he stalls his feet against the pass rusher anticipating the contact as the pass rusher runs right around Raimann’s outside shoulder like a turnstile and tackles the QB to the ground as he lets go of the football.

Here is another play where Raimann is asked to chip on the DL as he clips to the second level to pick off the linebacker in the box. Raimann gets to the second level but reaches forward with his hands rather than running his legs on contact into the defender, thus allowing the defender to chop down his hands as Raimann stumbles forward on the whiffed block attempt and looks back as his assignment gets in on the tackle.

Overall, Bernhard Raimann is athletic, yet raw player that needs some refinement in the finer details of his game before he can be justified as a starting option. His effort both in the pass and run game are phenomenal and he provides a steady presence that lacks the highlight plays but doesn’t have many lowlights either. Personally, you’d like to see nastier come out of him as a blocker to accompany improved size and play strength, but the tools as there to build on what Raimann already is to make him a quality player at the next level.

When I was watching Raimann, a name that come to mind as a potential pro comparison is former Notre Dame and current Miami Dolphins OL Liam Eichenberg. Eichenberg came out of South Bend an older prospect as well, already being 23 years old. He boasts nearly identical measurables as Raimann (6’6 1/8”, 306lb, 32 3/8” arms) and is a good, but not exceptional athlete. He too plays as a steady presence that doesn’t physically dominate his competition yet can be a reliable contributor both out at tackle as well as inside at guard where he logged some starts this past season which Raimann did some at the Senior Bowl as well.

Eichenberg was drafted in the second round of the 2021 NFL Draft, and I could foresee Raimann going in a similar spot given his current skill set, his room for growth given his athletic profile and newness to the position, but also the fact that he is raw when it comes to executing the tackle position at a high level. I was told by Raimann that he had a formal interview with the Steelers at the NFL Combine, so there is probably some interest in Pittsburgh in a player like Raimann should he be available past Day One of the draft. Given the fact that Pittsburgh has been open to drafting non-Power 5 prospects outside of Round One, Raimann should be a name to watch.