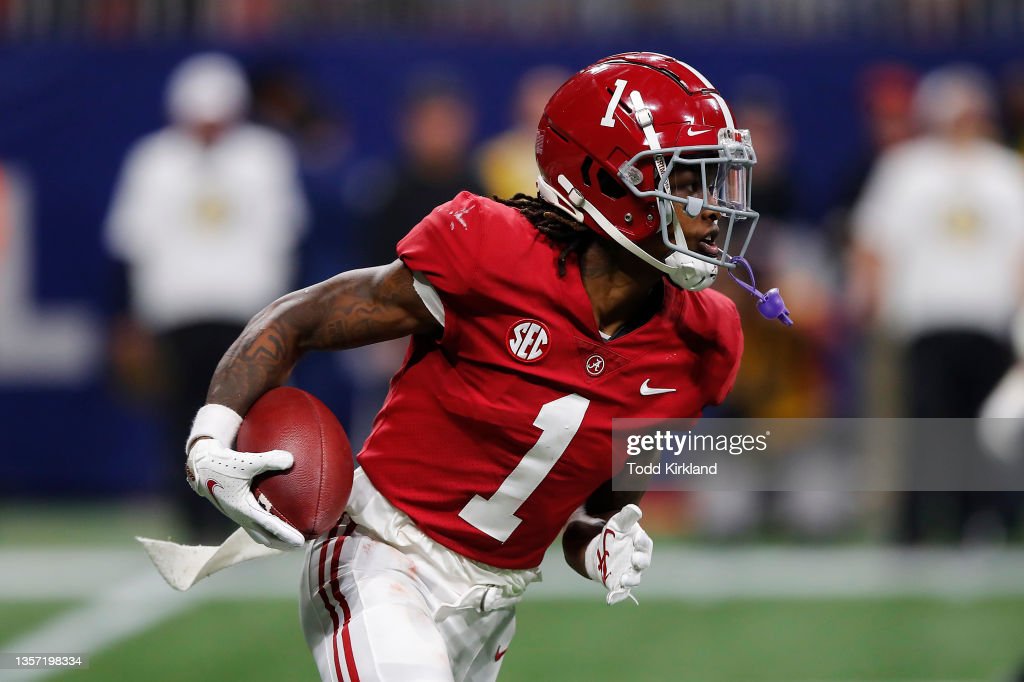 From now until the 2022 NFL Draft takes place, we hope to scout and create profiles for as many prospects as possible, examining their strengths, weaknesses, and what they can bring to an NFL franchise. These players could be potential top 10 picks, all the way down to Day 3 selections and priority undrafted free agents. Today, I’ll be profiling Alabama wideout Jameson Williams, who burst on the scene as one of the top receivers in college football this season.

— Twitchy, explosive receiver who can take top off defenses
— Quickly eats up defensive back’s cushion with natural straight line speed
— Elite YAC ability that can turn slant, curl route into six points
— Reliable hands catching ball over the middle of field
— Excellent ball tracker who can separate in the air and locate the football without issue
— Uses route tempo to keep defenders off-balance, making it difficult for defensive backs to play tight man defense on him

— Has issues dealing with physicality at the line of scrimmage, causing his route timing to be disrupted
— Route releases must continue to be diversified, relies on speed release or jab step at line of scrimmage
— Play strength needs to improve, can be pushed around during and at the beginning of routes
— Not a savvy route runner yet, can continue to learn deceptive route running techniques to accentuate his ability to get open
— Torn ACL in National Championship game, which leaves his availability early in training camp up in the air

— Appeared in 37 total games at Alabama and Ohio State, making 21 total starts (15 in 2021, six over two years at Ohio State)
— Caught 79 passes for 1,572 yards and 15 TD’s in 2021, including two kick return touchdowns
— First team All-America recognition from the Associated Press and The Sporting News
— Selected as the SEC Co-Special Teams Player of the Year by the conference coaches
— All-SEC First Team selection from the AP and coaches
— Rated as a four-star prospect and a top 150 player overall by 247Sports.com’s composite rankings, standout at Cardinal Ritter College Prep
— Holds Missouri state record in the 300-meter hurdles. who also won two state track and field titles.
— Torn ACL in second quarter of National Championship game against Georgia in January

The first play to highlight is one of the first all over his highlight reel, but Williams catches a glance route over the middle of the field and outruns angles to score this long touchdown against Georgia in the SEC Championship game. The way he accelerates after catching the ball and threatening a very talented defense who has multiple future NFL players is beyond impressive.

Williams, who is pictured at the top of the screen, runs a simple curl, attacks the football in the air, quickly turns up the field and is off to the races again. Because of his vertical prowess, defenses were playing off coverage against him, similar in the way NFL teams defend Tyreek Hill. The explosiveness with the ball in his hands makes Jameson Williams a candidate to go in the top half of the first round, despite his injury.

The fluidness of his route in this next clip shows off his suddenness at the top of routes, and ability to separate in the air. Aligned at the bottom of the screen into the boundary, Williams does a nice job giving a subtle head fake, hesitation and explodes up field, out running not only the boundary corner, but the over the top safety too. Excellent ball tracking here from Williams to score yet again another long touchdown.

However, as explosive as Williams is, it’s hard to ignore how much he struggles against physical, athletic corners. Against Florida, Kaiir Elam gave Williams fits, as he was unable to separate when matched up against Elam, and was forced into uncomfortable catch situations on the perimeter. On this hitch route in particular, Williams struggles with a clean release, as he tries to utilize a delayed jab step, but it doesn’t work, and Elam sits on top of the route and challenges him at the catch point. This makes me believe that against NFL teams who employ physical, fast corners who specialize in man defense, that Williams will struggle getting off the football and shaking tight coverage.

Aligned at the bottom of the screen in the clip below, Williams once again shows off his short area quickness, the utilization of head fakes and selling the dig route for another 20+ yard touchdown. He shows off the natural tracking ability, fading as the ball is arriving and not slowing down out of his breaks. The short area explosiveness makes him such a dangerous receiver attacking vertically.

The final play here against Florida is once again showing off his YAC ability, how he can quickly maneuver through a defense and turn a routine completion into an explosive play. The Steelers relied on this a lot last year with crossing routes and short checkdown routes, and while Williams will benefit more from an offense that allows him to work on the vertical plane early in his career, he certainly can fit the Steelers offense that allows him to make plays in space. Whenever Williams has the ball in his hands, something exciting happens.

Injury aside, Jameson Williams is one of the fastest, most explosive receivers in this draft class. His size may concern some, but in terms of his natural straight line speed, threat to score from anywhere on the field and tracking ability, his skill set is one the NFL has come to covet over the years. Williams is the next in line prospect from Alabama who is NFL ready right now and assuming he recovers from his ACL injury fully, can make a splash in the league with his vertical ability.

As for the fit in the Steelers offense, Williams would be a great compliment to both Diontae Johnson and Chase Claypool. Williams can be that true vertical threat that allows Claypool to see more big slot duties with JuJu Smith-Schuster now gone, and give Johnson more room to operate in the boundary and see one-on-one coverage. Adding a player like Williams opens up your playbook and immediately upgrades your playmakers on the outside.

However, realistically speaking, the Steelers would have to move up from 20 to get Williams, and with Malik Willis firmly in their sights, it would be unlikely. Williams does fit a need for the Steelers, but because he’s a premium receiver in this class, expect him to be gone in the early teens.