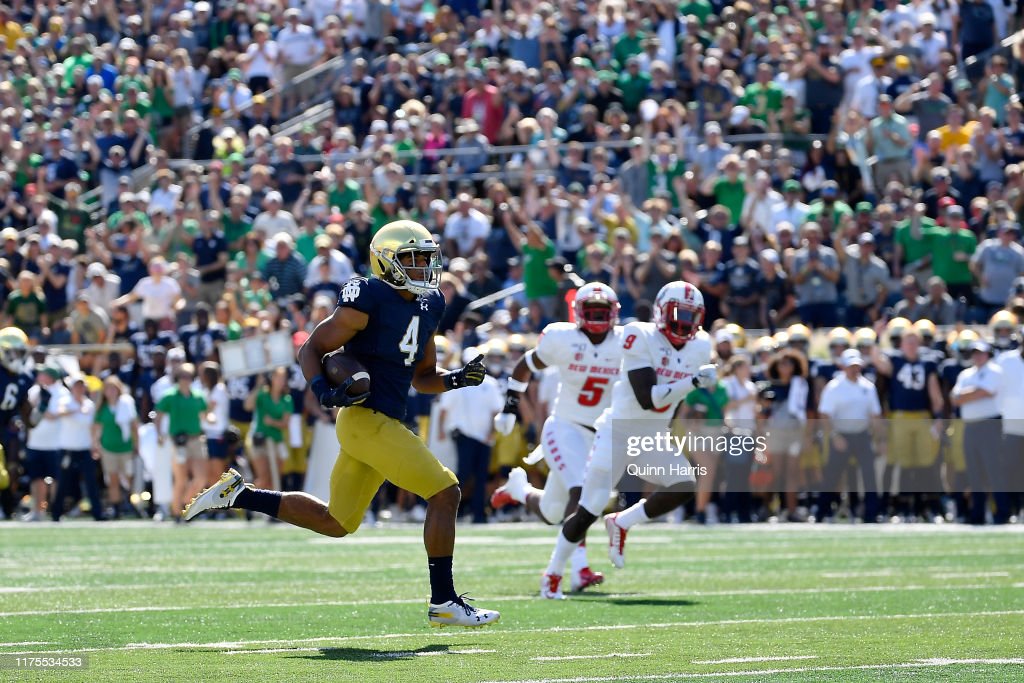 From now until the 2022 NFL Draft takes place, we hope to scout and create profiles for as many prospects as possible, examining their strengths, weaknesses, and what they can bring to an NFL franchise. These players could be potential top 10 picks, all the way down to Day 3 selections and priority undrafted free agents. Today, I’ll be profiling Notre Dame WR Kevin Austin.

— Great size, long arms, built well with big lower half
— Excellent testing, classic height/weight/speed type of receiver
— Vertical threat in testing and on tape, classic Z-type wideout who routinely won deep
— Able to beat press with violent strike and decisive feet, stacks corners and boxes them out with his size and frame
— Tracks ball well in the air, makes tough over-the-shoulder catches
— Excellent blocker with size and demeanor to support it, runs his feet and works hard to be an asset as a blocker
— Size helps him break tackles and earn YAC, hard for smaller defenders to bring down 1v1 in open field
— One year of strong production, ascending player with room to grow
— Some inside/outside versatility

— Smaller hands than expected for his frame
— Limited route tree, vertical routes/overs were majority of concepts and will need to vary routes at next level
— Lacks suddenness to create separation underneath, doesn’t quite play to shuttle/agility times as a route runner, and works best running in a line
— Not a smooth runner in the open field who can lose his balance
— Feast/famine player, not a volume receiver
— Only one-year of production, limited sample size of tape and production, hardly played any football outside of 2021 year
— No return value

— One-year starter for Fighting Irish
— Career: 54 receptions, 996 yards (18.4 YPC) 7 TDs
— 2021: 48 receptions, 888 yards (18.5 YPC) 7 TDs
— Did not travel with team final two games of freshman season, suspended by team for all of 2019 due to unspecified rules violation (suspended first four games of year due to second offense of school’s marijuana policy)
— Returned to team for 2020 season but played in just two games, missing rest of year with foot injury he battled, shutting him down for the year in late October
— Four-star recruit out of Coconut Creek, Florida, had 34 offers, chose Notre Dame over Clemson, Michigan, Florida, USC among others
— Caught 35 passes for 761 yards (21.7 YPC) with 11 TDs, had another two TDs as a senior in high school
— Averaged nearly 25 YPC as a high school junior

It took Fighting Irish fans to be patient but Kevin Austin Jr. finally arrived on scene in 2021, bursting out as one of the team’s top receivers. Austin is a classic height/weight/speed guy and he even looks bigger than his 200-pound frame suggests. He carries his weight well with a big lower half.

Austin’s best calling-card is winning vertically. He combines size, strength in his hands, tracking, stacking, and finish to routinely win vertically. A perfect “Z” type of receiver the way offenses design it up. Some examples.

Austin is also a willing and talented blocker who looks to spring teammates for longer runs. Cut-up of those both mid-play and as a designed blocker on cracks/insert blocks.

Though it’s a bit difficult to show, he struggles when he has to make smaller movements. His agility drills look really good but they don’t quite translate on tape. He’s a vertical, straight-line runner who doesn’t have a ton of nuance in his route-running. Partly due to size and some ankle tightness and partly due to his limited experience. Which opens up another story. Austin barely played football until his senior season at Notre Dame. He had off-field issues late in 2018 and for all of 2019. It’s speculated he repeatedly failed marijuana drug tests that led to the Fighting Irish suspending him for the entire 2019 season.

Now, the NFL’s crackdown on pot has been lifted and you won’t get suspended for it but the repeated failed tests still isn’t a good look for a guy who knew he wouldn’t play if he kept failing drug tests. Teams will certainly be doing their homework on his background and you can read more about it here. He also battled a nagging foot injury for most of 2020 and caught just one pass the entire year. Do appreciate and respect Austin’s decision to stay in school and not transfer, as has become common these days.

So his body of work is judged basically off of just one season of play. A good season, mind you, but a limited body of work, making Austin a project and a projection. On-tape, he does his one thing well as the vertical, Z-receiver, but the limited ways he consistently wins coupled with his inexperience creates more risk than usual for a prospect.

My NFL comp may sound familiar to the hardcore Steelers’ fan. Former Clemson WR Deon Cain, a short-time Steeler who had the talent but a career that hasn’t panned out. That’s not to say Austin will fail but their styles and game are similar, though Austin tested better in explosion drills.