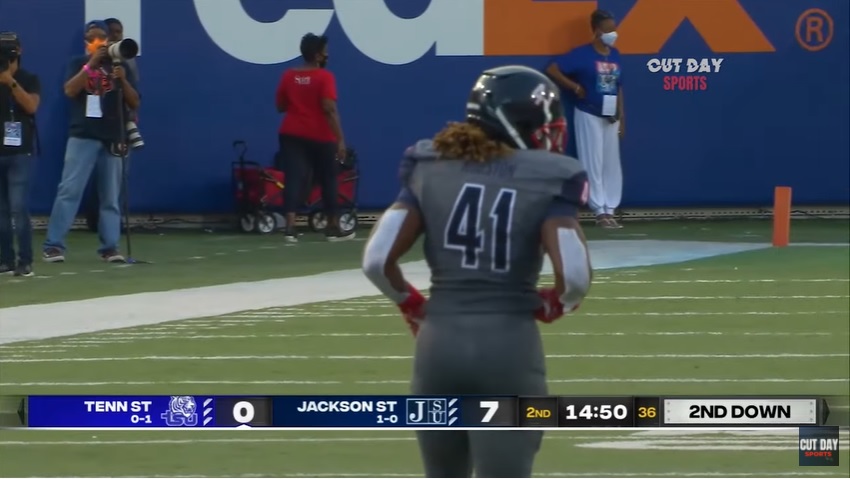 From now until the 2022 NFL Draft takes place, we hope to scout and create profiles for as many prospects as possible, examining their strengths, weaknesses, and what they can bring to an NFL franchise. These players could be potential top 10 picks, all the way down to Day 3 selections and priority undrafted free agents. Today, I’ll be profiling Jackson State EDGE and former Florida Gators LB James Houston IV.

— Quickness on display as an EDGE rusher after primarily playing as an off the ball LB at Florida
— Ability to get small when facing OT’s, making them whiff on blocks
— Shows pretty good timing off the snap
— Plays from snap to whistle at the same speed nearly every play with constant QB pursuit
— Speed rush with lateral hesitations and jukes also leave lineman whiffing
— Wins a lot of matchups within an even front
— Good backfield recognition on RPO’s and play action
— When flushed up the field in pass rushing situations, has a knack to quickly get back to the pocket and affect the play
— Causes many OT’s to look like there are standing still at times
— Ability to drop in coverage and not look lost

— When rushing against a LT there’s many instances where the outside speed rip gets him off balance and buried in the ground
— Hands are tied up easily when faced against a Tight End who have average lateral quickness and becomes quickly neutralized
— When walking back an OT with bull rush, doesn’t disengage quickly enough to attempt a secondary move
— Loses balance and falls to the ground when trying to bend on the outside of an OT with no contact in some instances – hasn’t mastered contorting his body, balance, and leverage on outside pass rush moves
— Can look a little uncomfortable at times setting the edge against the run
— Might have questions about suspension as a Freshman at Florida

— Grad transfer from Florida to Jackson State, appearing in 33 games as a Gator with (3) starts and 13 games at Jackson State with 11 starts
— Chose Jackson State after interest from Missouri and West Virginia once entering portal
— Florida Career: 65 tackles, 15 total pressures, 5 sacks, 4 forced fumbles
— 2021: 75 total pressures, 20 sacks, 51 defensive stops, 6 forced fumbles
— 2021 All SWAC First Team Defense & SWAC Newcomer of the Year
— Redshirt year as a Freshman at Florida in 2017 was actually a suspension due to credit card fraud incidents involving several teammates at a bookstore
— Three-star OLB recruit out of American Heritage HS in Fort Lauderdale, FL, choosing Florida over Arkansas, Auburn, California and Wisconsin
— Received Bachelor’s degree in Educational Sciences from Florida in August 2021
— Nickname is “The Problem”

If someone were to start watching a Jackson State game, completely unaware of who the headlining Florida grad transfer is for the Tigers, one will quickly guess correctly it’s #41.  There’s indeed times Houston IV is that dominant against the competition this past season.  In watching his first two games at Jackson State it doesn’t seem as if the opposing teams had much of a scouting report on him in terms of a pass-rusher.  Especially so against Tennessee State in his second game of the season, tallying 10 total pressures and 5 sacks – both single game highs for Houston IV.

One fun trait while watching Houston IV operate is once he has beaten his blocker and sets his sights on the passer, it’s an endless pursuit for him as he will chase a QB all over the field.  At times there are brilliant displays of being washed up 10+ yards behind the line of scrimmage and a routine of doubling back to either pressure or sack the passer for a good 4-to-5-yard loss.

The pass rushing skills on display are all due to speed and power.  He’s not your typical bull rusher though as he doesn’t look to necessarily continue to drive the blocker back in the pocket.  Instead, Houston IV will make his push, look to get lateral quickly, and then zoom past his blocking matchup.  There are also times where Houston IV will offer simple hesitations and/or juke moves to freeze a lineman which in most cases causes a pocket collapse to where the QB is now on the run or dead to rights.

His pass rushing tendency against a LT is trying to work outside-in but his balance and leverage can fail him at times.  Houston IV makes the inside and outside speed rushes against RT’s look relatively easy. There are times though when lined-up against the offense’s right side where he takes on a kamikaze type of mentality by simply rushing straight into a blocker and bouncing off them without much resemblance to a pass rushing move whatsoever.

That’s not the case here however as Houston IV gets the RT to react to the outside move, sheds him, and then he quickly gets past him with a brief stumble and inevitable sack of the QB.

Issues with stumbles and balance are prevalent but his talent makes up for it as he once again finishes the play here.

On this play during the first game of the season in a Jackson State jersey, Houston IV freezes the pulling guard for a moment by offering his hesitation/juke move and then gets the QB to the ground.

Also, in his first game playing primarily as an EDGE rusher, Houston IV ends the game with another outside-in move on the RT to sack Florida A&M’s QB.

Here against a LT, the burst & dip allows him to get past the blocker and Houston IV delivers a big hit.

Another example of wanting to get low past the LT but this time footing, and balance fails.

Each snap becomes more exciting than the previous one because you’re not sure how it will end.  There’s a good chance Houston IV is generating pressure on a passing play but watching from snap to finish holds a particular excitement.  A little raw and will need some polishing at the NFL level to sustain an opportunity of getting on the field as an EDGE rusher.  Having experience as an off the ball LB is a plus and it’s not as if he looks lost by any means playing a 5, 7, and 9 technique. A bit puzzling though is how he attacks when lined-up over a TE as they would on more than occasion control his pass rushing attempts. Coverage is a bit lacking as he was targeted 27 times during his time at Florida, allowing 23 receptions and (2) TD’s.

Thinking of a comp wasn’t easy as there’s not someone in memory who displays the balance issues Houston IV currently possesses.  Mario Addison of the Buffalo Bills however plays a somewhat similar game.  Addison relies on the speed rush outside quite a bit and lines up near exclusively outside the tackle box (81.4% of snaps for his career).  The relentless pursuit Addison has on plays also compares how Houston IV played with Jackson State last season, his first as a dedicated rusher off the edge.

Projection: Someone in the 7th Round could take a chance on Houston IV if looking for a pass rushing project.