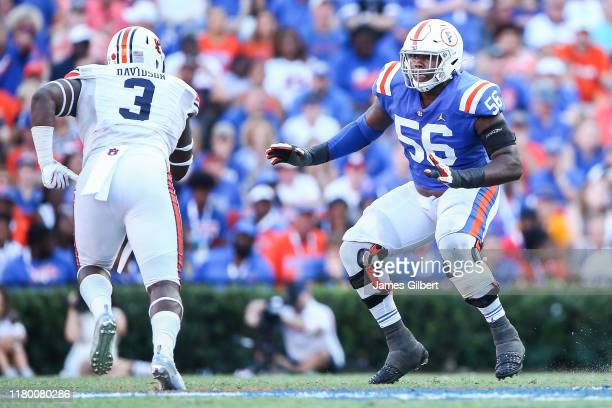 From now until the 2022 NFL Draft takes place, we hope to scout and create profiles for as many prospects as possible, examining their strengths, weaknesses, and what they can bring to an NFL franchise. These players could be potential top 10 picks, all the way down to Day 3 selections and priority undrafted free agents. Today, I’ll be profiling an offensive line prospect that has some key areas in his game that need to be addressed as he heads to the league, but also possesses some impressive tape with physical traits that you cannot teach.

— Has great length with an impressive wingspan for the position
— A good athlete for the position in terms of his ability to get out of his stance and work in space
— Can climb to the second level of the defense to pick up linebackers and safeties
— Long arms allow him to land punch on defenders before they can get into his framework
— Can reach block defenders in the run game and does a good job turning their shoulders away from the play side to create a seal in the run game
— Can wash defensive linemen down the LOS when asked to down block
— Will neutralize the pass rush of some of the best edge defenders when he lands his punch with arms extended, having the ability to mirror and maintain his block
— Can recognize stunts and twists coming off the edge, having the wherewithal to pick them up
— Showed notable improvement from 2020 to 2021 tape in terms of consistency and play strength
— Showed versatility in college, playing both inside and outside

— Lacks the ideal height and mass you want at the tackle position
— Foot quickness varies in terms of being able to set the depth of the pocket in his pass set and mirror defenders laterally
— Can struggle to change direction quickly in space in order to adjust to defenders
— Needs to do a better job sustaining his blocks past first contact
— Loves to lean and drop his head on blocks, leading to whiffed attempts
— Can do a better job knocking down defender’s hands when hand fighting to prevent a false punch
— Doesn’t generate a lot of power in the run game
— Ends up on the ground far more than you would like to see due to lack of balance and play strength
— Could move inside to guard, but would struggle against sheer size and power should he not be able to add mass/strength
— Sixth-year senior that will be an older rookie and need some development
— Tries to get a jump on the snap on occasion, leading to false start penalties

— Redshirt Senior prospect from Mesquite, TX
— A two-time all-state honoree in high school that was selected to participate in the 2016 Under Armour All-America Game
— Originally committed to Texas where he appeared in two games before redshirting
— Sat out the 2017 season as he transferred from Texas to Florida
— Played in the first four games of 2018 as a reserve OL for the Gators
— Started all 13 games on the offensive line with most of his action coming at tackle with some exposure to guard
— Started at right tackle in all 12 games of the season in 2020
— Opted to use final year of eligibility in 2021 where he started in 12 games at right tackle
— SEC Fall Academic Honor Roll in 2020
— Is a musician in his free time and can play the tuba, flute, clarinet, trombone, trumpet, and the baritone
— Volunteers time at the Boys & Girls Club in Austin and donates toys to the Dell Children’s Medical Center and volunteers in helping clean up the streets in Austin to keep them clean

Jean Delance took the unconventional way to Gainesville, Florida, starting out committed to his home state Longhorns where he saw brief action his freshman season before deciding to transfer away from home and go from one prestigious football program to another. This required Delance to sit out the 2017 season, but he found his way onto the football field in 2019, becoming a starter at RT for the Gators where he would start for the next three seasons.

When I worked with Delance back in 2018, one thing that stood out to me was how long his arms were for his body type. Standing a shade under 6’4, Delance boasts 36 1/2” arms, imitating the wingspan of a condor rather than your normal human being. Arm length is a highly sought-after traits that scouts look for in OL due to their ability to land their punch on defenders first before the defender can get a hand on them and keep them away from their frame. Delance shows this use of arm length often in his film, neutralizing the rush like we see on this clip against stud EDGE #31 Will Anderson who Delance arguably gave the biggest fits this past season.

Another key aspect of Delance’s game that is enticing for scouts is how active his feet and hands are in pass protection. He fires backward out of his stance in pass protection (sometimes too quickly), having his hands at the ready to strike. Here on this rep against Oklahoma, we see Delance show urgency in his pass set, striking #11 Nik Bonitto as he attempts to spin back inside, chucking him away from the play and out of view of the screen, giving #11 Kyle Trask time to throw.

When he gets his hands out you and latches onto your torso, Delance normally wins the rep. Watch this rep from the Shrine Bowl where Delance picks up the edge defender crashing in, latching onto his shoulders and throws him to the floor to the right, putting him on the ground while keeping his feet moving, being ready for more.

Delance’s arm length also comes as a benefit when trying to down block an opponent and get underneath their pads to forklift them out of the way. That is exactly what we see on this rep against Anderson who now lines up as 4i technique. Delance comes down on Anderson’s outside shoulder, turns, and tosses him to clear a running lane off the edge.

Here against Kentucky, we see a similar example where Delance fires out of his stance and basically reaches the defensive lineman, working his hips and turning the defender’s shoulder to create a seal in the running game for #27 Dameon Pierce to run off his backside for a nice gain and first down yardage.

Delance is also enough of an athlete to work up to the second level in the run game or on screen plays and pick up backers and defensive backs in space. Here against Alabama, watch as Delance chips on Anderson and then locates #10 Henry To’oto’o, getting his hands on his chest and runs him away from the back.

Still, there are several key areas of concern when it comes to Delance and his game as he attempts to transition to the next level. First, he often doesn’t sustain his blocks to and through the whistle and is susceptible to having his hands knocked down by pass rushers. Watch here against the Sooners where Delance is in position and attempts to strike #7 Ronnie Perkins but uses the two-hand swipe to knock away Delance’s hands, rounding the corner and manages to trip up Trask as he releases the ball to his intended target.

Here is another example against the Wildcats where Delance starts out in good position with his punch on the edge rusher, but he punches outside the defender’s shoulders, allowing the pass rusher to get inside Delance’s chest where he uses the punch/chop/rip combo to work through the block and drill #5 Emory Jones in the pocket as he lets go of the football.

Because Delance knows he has longer arms than most of his competition, he likes to seek first contact as a blocker in the running game. This leads to him lunging forward on plenty of block attempts like this one against Kentucky, playing with his pads in front of his toes as he drops his head, thus leading to whiffed block attempts like this one where the defender gets skinny and holds the edge to keep outside contain, bottling up the QB keep for a loss of yardage.

Playing with his pads over his toes also leads to Delance getting stacked-and-shed fairly easily when he elects to lean forward into his blocks. Considering he also is fairly light in the pants as far as offensive tackles go, this can lead to him ending up on the ground far more than one would like. Here is a good example where Delance is on the way end of the LOS on the right side and tries to shoot forward into #8 Christian Harris who is ready for the contact, stands up Delance, and chucks him to the side and to the ground as Pierce attempts to bounce the run to the corner.

Overall, Jean Delance has some intriguing qualities you like to see in an offensive lineman. He has that rare length that teams drool over in OTs, having the ability to engage and land his punches early in pass protection. He also possesses adequate athleticism and movement skills to be used on the move and mirror pass rushers. However, there are plenty of technical issues Delance must iron out to become more than a depth piece at the next level, most notably the ability to sustain blocks, hit and replace, and generate more power in the run game without lunging forward on blocks.

For a pro comparison, New England Patriot OL Justin Herron came to mind as a lighter tackle prospect that also got drafted as an older prospect (age 24) in the sixth round of the 2020 NFL Draft that showed promise as a pass protector but needed more refinement and play strength to take his game to another level. I foresee the same path to the pros for Delance, who figuratively could kick inside to guard, but still would require adding more functional strength and mass to his frame to hold up either on the edge or the interior.

The Pittsburgh Steelers could look to add more depth to the offensive line after making several key additions via free agency this spring. Delance would profile more as a project/potential swing player that brings inside/outside versatility to the table as he looks to hone his skills and add more mass. He may never develop into a full-time starter, but his length and movement skills should garner Delance some attention late in the draft or as a UDFA that his potential as a run blocker and the traits to become a solid pass protector in the league.