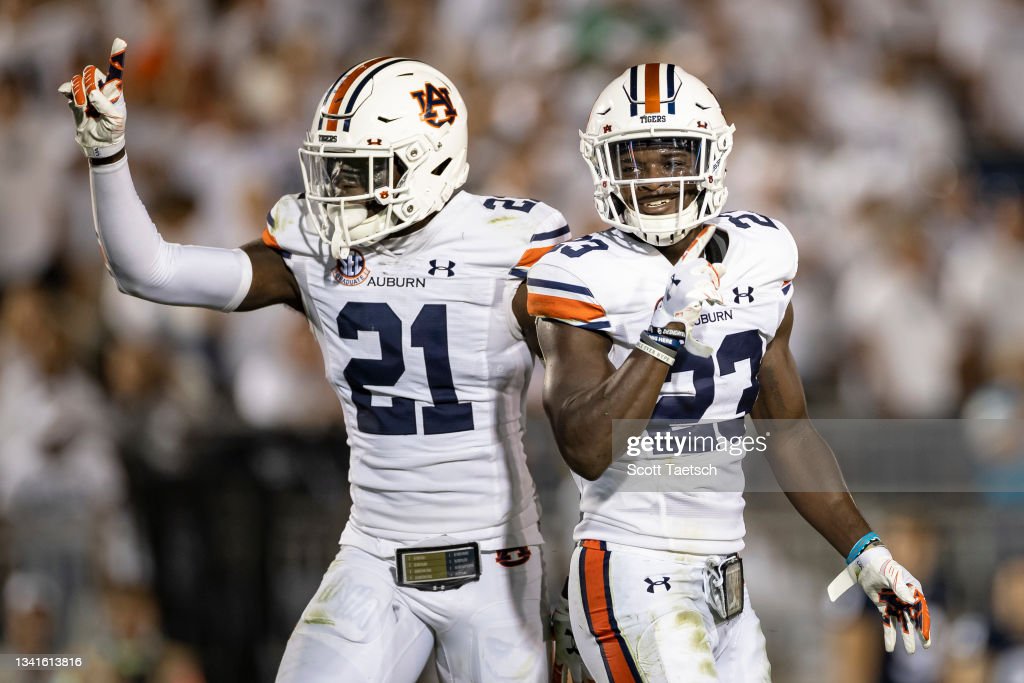 From now until the 2022 NFL Draft takes place, we hope to scout and create profiles for as many prospects as possible, examining their strengths, weaknesses, and what they can bring to an NFL franchise. These players could be potential top 10 picks, all the way down to Day 3 selections and priority undrafted free agents. Today, I will be profiling a two year starter at safety from the SEC.

Monday has good size and length on a lean frame but don’t let that fool you. He likes to play with physicality especially near the line of scrimmage. He was used in a variety of ways for the Tigers including the deep safety, as a robber, in the slot as well as in the box and often aligned to the boundary side of the field.

Against the pass, when playing the deep safety, he played really deep to keep everything in front of him. He comes downhill under control to make tackles as the last line of defense. While playing underneath in Zone he was solid jamming receivers through his area and played in the middle, curl and flat areas. He attacks blockers on screen plays to disrupt the play. In Man coverage he is best used in the short area on tight ends and he can body them with physicality and stay in phase. He has good timing and acceleration when blitzing versus the run and pass and will get up in passing lanes.

At Penn State, Monday (21) gets through the block to make the play on the screen pass.

At LSU, he times the snap perfectly and then gets up in the passing lane to knock down the pass.

Vs Alabama, he will time his blitz well and beats the tight end around the edge for a sack.

Against the run, he is at home playing in the box and this is where he is most effective. He takes on blockers on the edge aggressively with good pad level and hand placement. If you give him a lane he will accelerate into to make plays in the backfield. He will work through traffic to get to the ball and drives through the ball on his tackles.

At Penn State, he makes a quick read and gets downhill to make a play in the backfield.

Vs Mississippi, he is the near safety on the 30 yard line and attacks the blocker going through him to make the stop.

Vs Mississippi, his physicality shows here stepping up to take on the running back one-on-one.

His route processing overall is subpar and he often took himself out of position following underneath routes and not staying a deep as the deepest receiver. This processing leads to his range being adequate overall being late to get on the move. He is stiff moving in space with his pad level behind high in his backpedal and clunky in his change of direction. The farther he is from the line of scrimmage the less aggressive he plays. He is not a good fit for a Man coverage scheme and will bite on double moves. Often goes for the big hit rather than wrapping up. Some plays he seems to let up when it looked like he was going to make a play and he doesn’t chase plays that are out of his area. He was ejected from four career games for targeting and lets his alpha mentality get the best of him often taunting his opponent.

At Penn State, at the bottom of the screen he is in stacked coverage and goes with the wrong receiver allowing a big play.

Vs Georgia, here is the play that got him ejected with the helmet to helmet hit.

Vs Mississippi, I don’t know what he was thinking here. He times the blitz well, has a chance to make a play in the backfield and just does a fly by.

Overall, Monday has good size and length and is a physical defender especially in the box. He shows good technique taking on blocks and works to get to the ball. Against the run, he can shoot gaps quickly and make plays in the backfield. He has played in multiple alignments mostly in Zone coverages and plays under control when playing from the deep safety.

Areas to improve include mental processing of route combinations and not allowing receivers deeper than him. He could improve his tackling by wrapping up instead of going for the big hit and pursue the ball more consistently. He must stop the antics after plays that could lead to penalties. In the first games I watched I saw him do a throat slash motion, get in the face of receiver after a teammates interception, wag his finger in the face of the quarterback and stand over a player multiple times after a tackle. He is an unsportsmanlike penalty waiting to happen.

His best fit is in the box. He plays with more confidence and aggressiveness and does his best work within yards of the line of scrimmage. The scheme he goes to in the NFL will be very important to maximize what he can do. If they do use him deep he would fit best in a Cover 3 scheme.

Pittsburgh likes versatility within their safeties to make them somewhat interchangeable having the freedom to move them around which makes me think he isn’t a great fit. He could possibly be a dimebacker as well as contribute on special teams. Darian Thompson is a player with similar measurables whose best fit was also near the line of scrimmage.