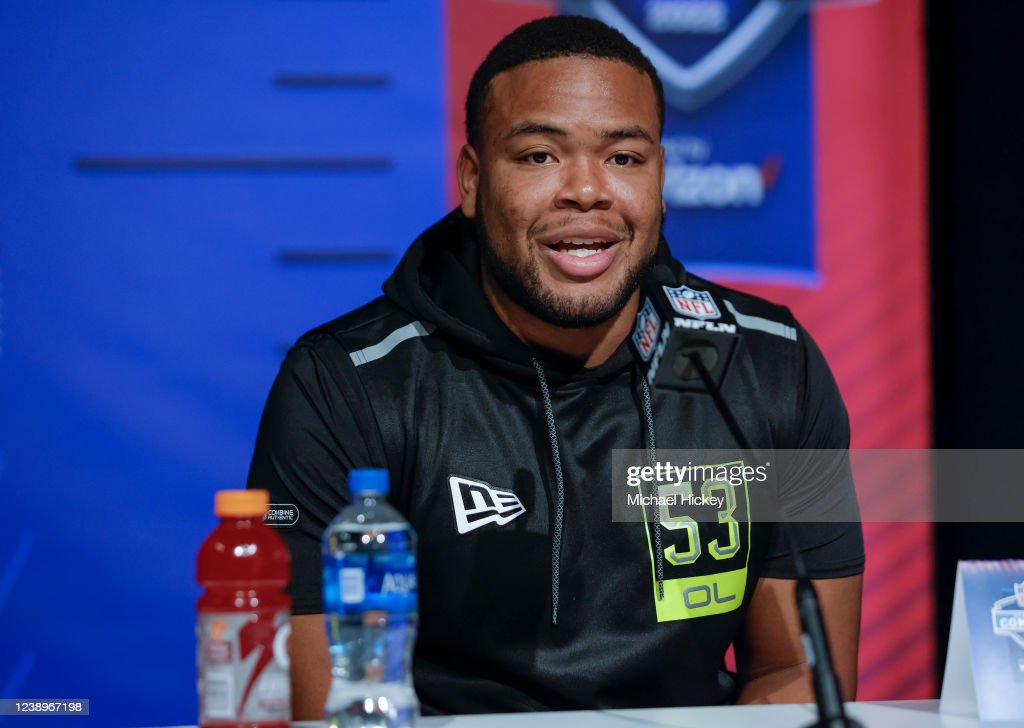 From now until the 2022 NFL Draft takes place, we hope to scout and create profiles for as many prospects as possible, examining their strengths, weaknesses, and what they can bring to an NFL franchise. These players could be potential top 10 picks, all the way down to Day 3 selections and priority undrafted free agents. Today, I’ll be profiling Alabama wideout Jameson Williams, who burst on the scene as one of the top receivers in college football this season.

— Efficient lateral movement, calculated punches and patient hands
— Feet and hands are married, times his punches and quickly replaces hands in pass protection
— Flexibility in his hips, ankles to anchor against stronger, quick twitched opponents
— Quick burst out of stance who is rarely beat to the spot at the apex of a pass rush
— Shows athleticism to pull out in space, consistently hits second level on double team/combo blocks
— Quickly deciphers twists, stunts, games and locks out firmly in both the run and passing games
— Positional versatility, made starts at both Center and Tackle at the collegiate level

— Overall play strength must improve, shows adequate anchor but can be overwhelmed with power
— Slender frame for position, just over 300 pounds and can add mass to his body to handle NFL physicality
— Hand placement is low on initial strike and contact, leading to counter move success and overextension of his body
— Not much of a finisher in the run game, due to RPO system and having stalemates at line of scrimmage in run game
— Arm length is adequate but lack of length shows up against high profile pass rushers

— Appeared in 48 games over the course of his career, making 37 starts including 36 over the last three seasons
— Made starts at both OC and LT in career, started first 14 games as OC in 2018, 2019
— 2021 First Team All-ACC by league, coaches and press
— Listed as a three-star prospect by Scout, ESPN and 247, standout at Catholic High School in Baton Rouge
— Originally committed to Southern Miss before flipping to Wake Forest
— Took third in the state of Louisiana in the shot put as a junior in high school

One of the more impressive offensive line watches thus far in this draft class was Wake Forest offensive lineman Zach Tom. His listing at tackle doesn’t do justice, as Tom started at center for the Demon Deacons in 2019, earning honorable mention from the ACC in that season.

Over the last two years, Tom has made a name for himself at tackle, boasting an impressive resume where he has played 3,107 snaps and has only given up just two sacks. When you click on his film, the first thing that stands out is the efficiency in which he moves with both his hands and feet. Against Jermaine Johnson, a future first round pick in this class, Tom does a nice job showing patience, moving laterally, countering Johnson’s moves and resetting his hands to stymie his pass rush. Tom shows off his grip strength and fundamental ability to lock out his arms and hands.

A few times on film, despite the RPO offense the Wake Forest runs limiting his ability to open up his toolbox, Tom showed the ability to snatch and trap defenders. In this particular rep against Norfolk State, Tom does a great job reading the demeanor of the edge rusher, and pulls the chair from underneath him. Tom is calculated in his movements and his patient hands allowed him to control the rep from the start.

While Tom doesn’t finish much in the run game, he flashes the ability to wash defenders out of the hole and collapse while creating lanes behind him to run through. He does a nice job on this zone combo block, washing it down, getting a pancake and providing space to run through if the quarterback would have decided to hand the ball off instead of keeping. He’s rock solid as a run defender, keeping a clean path to blocking his man.

Clemson was a game Tom struggled with most, because of their ability to rotate players and ability to threaten turning the corner and use speed to power moves. On this rep in particular, Tom takes a flat angle out of his stance, giving a soft edge for the Clemson defender to exploit. Because of Tom’s late, low hands, the defender is able to use a one hand stab to shock, push and rip, leaving Tom reaching and his man causing a strip sack. It was one of the few times on film where he was flat out beat at the point of attack.

In a rep earlier in the game, Tom’s lack of play strength shows up, as he’s essentially walked back into the quarterback. His lack of length against the same Clemson EDGE defender shows up, as Tom is trying to counter, but can swipe away his hands quick enough to reset them and get his hands inside. The late, low hands cause him to lose the rep from the start, and he is unable to gain enough leverage to anchor and redirect.

While there are some clear limitations on tape for Tom, he does a nice job handing off and handling twists and stunts. Against Florida State, Tom initially chases the initial player that pops up inside, but uses his lateral quickness to beat the looping defender to the spot, does a nice job with his initial hand placement and sits into his anchor. Impressive lateral ability to redirect, locate and finish the play to prevent a sack and keep his quarterback clean.

Final play here from Zach Tom, and he shows yet another part of his pass protection toolbox. He went back and forth with the Pittsburgh EDGE all game long, both earning wins at various points of the game. However, Tom here uses a flash technique, allowing the Pittsburgh edge rusher to commit to his move, and Tom is able to replace his hands and set into his anchor, while running the hoop.

Zach Tom is not your typical offensive tackle prospect. It is rare that a player has experience at both center and tackle, playing at a fairly high level in both spots. With the lack of depth on the Pittsburgh Steelers offensive line, Tom is a candidate to either push Chukwuma Okorafor or Dan Moore Jr. to play at either tackle spot, or battle for an interior spot as Mason Cole or Kendrick Green hold down the center spot. While he isn’t the most physical offensive lineman in this class, Tom certainly gives you a versatile option, with a player who moves efficiently laterally, tested off the charts athletically, and is intelligent enough that he mastered two positions at the college level.

His name is one that could be called as early as mid round three with his versatility, but if not, he will certainly come off the board in round four. Everything about his playing demeanor reads calm, calculated and efficient. He would be a nice addition to a Steelers offensive line still trying to figure things out.