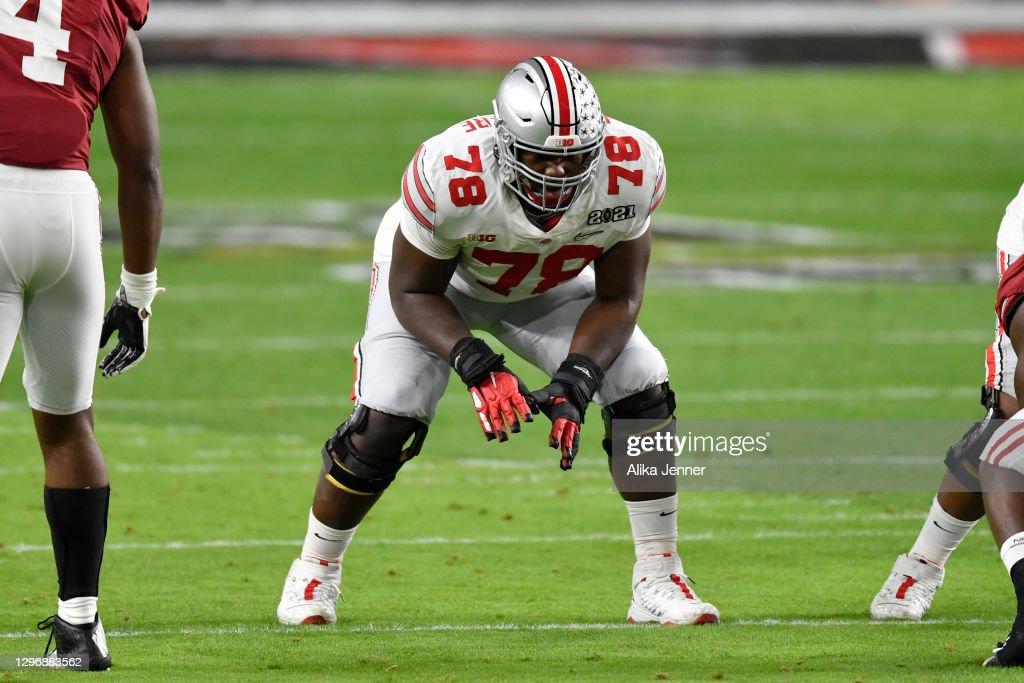 From now until the 2022 NFL Draft takes place, we hope to scout and create profiles for as many prospects as possible, examining their strengths, weaknesses, and what they can bring to an NFL franchise. These players could be potential top 10 picks, all the way down to Day 3 selections and priority undrafted free agents. Today, I’ll be profiling a Big Ten offensive tackle with experience starting on the left and right side.

Ohio State has had at least one offensive lineman chosen in the NFL Draft in eight of the last nine years. Petit-Frere will join them this year. He has good size and length and looks the part. He started on the right side in 2020 and switched to the left side in 2021.

As a pass blocker he utilized multiple pass sets. He sets up quickly on 45 degree and quick sets with good width in his base and balance in his stance. On vertical sets, he gets solid depth and can slide well up the arc while using his length to push defenders past the quarterback. When he can get his hand inside, he has good grip strength to control pass rusher. He shows solid effort to reset his hands when the defender wins with his hands. When anchoring, he shows good core strength and footwork to reset and halt the rush.

Vs Alabama, Petit-Frere (78) is on the right side here handling the stunt well passing off the outside rusher and pushing the inside rusher up the arc.

Here are a couple reps with good hands on the outside rush as the left tackle. Against Purdue, he slaps the inside arm to get the rusher off balance. Then against Michigan, he is patient with his hands and pushes the defender up the arc.

On slide protections he has good snap quickness and lateral agility. On fly passes he displayed good timing and quickness to the second level to cut off the linebacker. He was solid handing twist and stunts with his timing and processing to pick up the looper.

Vs Purdue, from the left tackle he’ll work out to the second level to cut off the linebacker.

As a run blocker, he displayed very good snap quickness and lateral agility to the front and backside. A lot of the run offense was Zone runs. From the backside, he had success reach blocking the three technique and if he couldn’t get his hips around he would still sustain and drive the defender out of the play. On the front side, he gets good leverage and will drop his pad level to get under the edge defender to push or wall off to the outside. He was effective on pin, double team and down blocks rolling his hips through and keeping his feet moving.

At Minnesota, the left tackle will get out of his stance quickly, lock on to the defender and escort him out of the club.

At Minnesota, this was the best reach block I saw. He gets the head across, flips his hips and has a nice running lane behind him.

Inside moves have given him a lot of trouble. Some are overset issues and some are quickness when countering the defender. Penn State went after him with inside moves and adding multiple defenders to his side to keep him thinking. His punch is adequate at this time and he could benefit from more usage of independent hands. There was some improvement late I the season but overall it didn’t have a lot behind it. When the defender gets to his chest he was easily shed and often ended up on the ground. He carries his hands low in his pass set and has adequate placement and timing. In the games watched he was not used to get out in front on screens.

Vs Penn State, here are a couple of example of defenders beating him to the inside.

At Michigan, he allows hands to his chest and the defender is able to pull him out of the way.

On short yardage and base blocks he lost the pad level battle and was unable to move the opponent.  Hand placement on run blocks was often outside the defenders frame and left him unable to get a good grip. His combo timing was a little quick and his angles to the second level were too deep and as the post his pad level was high. He was not asked to pull in the games watched.

Vs Penn State, here are a couple of run plays. On the first he pops up and the defender gets into his chest to push him back. On the second, it looks like he takes the wrong step to the left allowing the inside lane to the defender.

Overall, Petit-Frere has good size and length as well as experience at both tackle spots. He uses multiple pass sets and has good agility up the arc. He displayed good hands to push rushers up the arc and good play strength to anchor versus power. As a run blocker, he has very good snap quickness and lateral agility to play in a Zone running scheme. He can reach block and wall off on the front with good execution on pin, double and down blocks.

Areas of improvement include his hand placement and punch timing in pass protection and he must improve on his handling of inside rushers. As a run blocker, he can improve with more consistent pad level, improved timing and execution to the second level and consistent hand placement enabling him to control the blockers.

Like it or not, I think the Steelers are happy with they’re starting tackles right now. I do think they could improve their depth. You don’t want Petit-Frere coming in and starting right away but he could earn the swing tackle spot while improving his technique. While he can play both, he looks more comfortable as a left tackle. His best fit is in a Zone running offense to take advantage of his quickness and agility and ability to block on the move. If he can get the issue cleaned up with inside rushers he could become a solid starter down the road. For a comp, I’ll go with Billy Turner who has similar size and length.