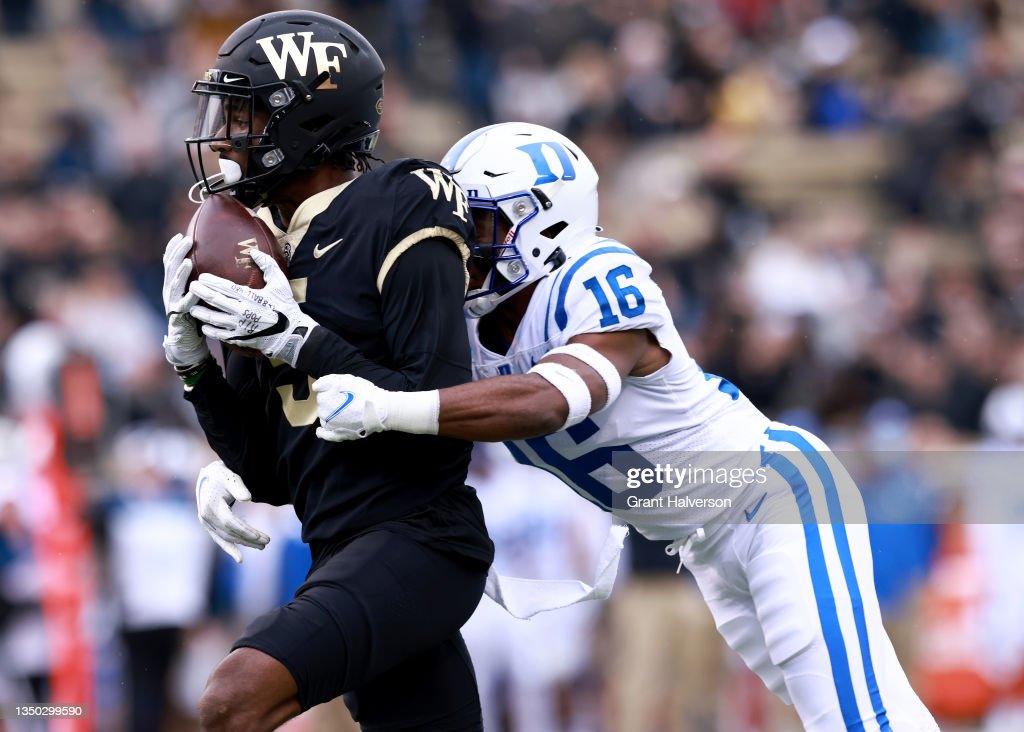 From now until the 2022 NFL Draft takes place, we hope to scout and create profiles for as many prospects as possible, examining their strengths, weaknesses, and what they can bring to an NFL franchise. These players could be potential top 10 picks, all the way down to Day 3 selections and priority undrafted free agents. Today, I’ll be profiling Wake Forest WR Jaquarii Roberson.

— Slot receiving threat – lined-up in the slot roughly 80% of snaps in college
— Chews up zone coverage schemes with regularity
— Makes his living on Out, Hitch, and Seam routes
— Wide screens were also an expectation for Roberson in Wake Forest’s offense
— Good hands with drops appearing to be more of an exception than a rule
— Ready to earn a reception by hauling in contested targets
— Can make the circus catches on high throws while timing jumps very well
— Large catch radius despite his measurables
— Has the speed to get past defenders downfield
— Displays of genuine excitement for teammates

— Waiting to see more action after the catch, especially against zone coverage – often seems satisfied with just the catch and goes to the ground
— Becomes a little predictable in his route running techniques – hesitations, hops & skips
— Slant routes can look really off when defensive backs are engaged – doesn’t get his outside shoulder turned quick enough at the plant which allows defenders to get their hands on to re-route
— Not physically imposing in his routes
— Limited Special Teams experience with zero snaps during 2021 season

While watching Wake Forest games from the past couple of seasons you can tell WR Jaquarii Roberson was a key cog in the Deacs offense.  Roberson is a mainstay from the slot in Wake Forest’s high scoring RPO heavy attack.  Roberson will line-up outside in bunch formations and in a tight stacked formation as well, but nothing in the realm of a true split end or flanker receiver fits his bill.  Within Wake’s tightly stacked formation, Roberson will motion across on occasion, but he’s rarely a threat for jet or ghost actions.  Not much of a rushing threat overall either; 2 rushes for 8 yards during college career.  The speed is there but not in the typical go-route fashion down the sidelines.  His speed allows him to get downfield and post-up defensive backs with ease though.

Basketball skills are evident as he plays middle of the field targets as if he’s going to snatch a rebound.  Leaves his feet quite a bit when between the numbers and there are times where it’s more habit than necessity.  Out routes are very regimented and have a carbon copy feel to them.  Defensive backs know the out-route targets are coming but due to Roberson’s catch radius, he makes the catches routinely at the sideline.

Roberson offers a few moves in his breaks with a habit of hopping and hesitating.  On this play Roberson does well to slightly freeze the defensive back in his route before hauling in a nice catch away from his body towards the back corner of the end zone.

An obvious must at the next level is to get both feet down as quickly as possible but hard to knock the effort here when slowed down.

Deep middle of the field catches is a common theme for Roberson as he was able to make a couple of spectacular snags against Syracuse.

Roberson also does well in traffic and has an ability to create after the catch, but it doesn’t show up on every play.  In 2020 compared to last season he looked more livelier after a catch in terms of wanting to create more and his numbers suggest as well – 4.0 yards after the catch average in 2021 and 6.7 average in 2020.  During the Duke’s Mayo Bowl versus Wisconsin from the 2020 season, Roberson shows off the extra yardage with defenders all around him.

The bread and butter however for Roberson are out breaking routes as he secures another TD catch here against Wisconsin while weaving through traffic.

In terms of a slot receiver, it appears Jaquarri Roberson does what he’s been asked and coached to do.  He’s a wide receiver capable of making big plays as witnessed during his time in college within Wake Forest’s offense.  Downfield speed is constantly there as he’s able to get past the defense.  Some questions may arise regarding how he can win on slant routes and if the NFL staple of crossing routes will come naturally to him as well.  The excitement he displays always seems genuine as he gets more excited at times when teammates make big plays more so than when he makes a highlight reel play.  Frame and build seem suited for the next level and would guess some bulk can be added.  Special Teams experience may factor in when a team is looking to add to their WR room in this draft and Roberson having just 14 snaps total will be a knock.  What you can’t dismiss is Roberson’s ability to show-up for big games as Wisconsin learned in their bowl game.

The NFL comp for Roberson’s game I feel is Cedrick Wilson, formerly of the Dallas Cowboys and now with the Miami Dolphins.  Wilson wasn’t thought of much as a slot receiver at both Boise State and in his first couple of years in Dallas but is finding success running much of the same routes as Roberson. Wilson’s penchant of catching away from his body on out breaking routes and going high to grab a pass on seam or hitch routes offer similarities.  Where Wilson differs is he’s experienced success already on crossing routes within an NFL offense.  Crossing routes make up 15 of Wilson’s 96 career targets while Roberson was targeted on just 8 of 227 total targets during his time at Wake Forest.  For the Steelers in particular last season, the third highest targeted route was crossing, behind out and hitch routes – two of which Roberson has a good feel for already.  Time will tell how well Roberson adjusts overall to the next level as a team could take a late round flier on him, much like Dallas did with Wilson.

Projection: Day 3 pick in either 6th or 7th round