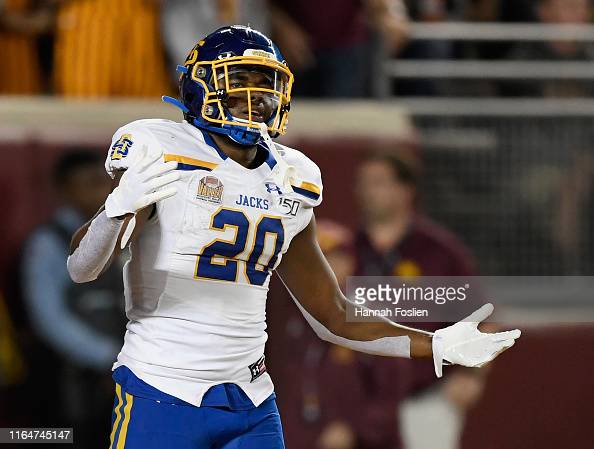 From now until the 2022 NFL Draft takes place, we hope to scout and create profiles for as many prospects as possible, examining their strengths, weaknesses, and what they can bring to an NFL franchise. These players could be potential top 10 picks, all the way down to Day 3 selections and priority undrafted free agents. Today, I’ll be profiling a running back prospect that has fared well throughout the pre-draft process and combines an athletic skill set along with impressive FCS production into an intriguing package at the next level.

— Has average size and bulk for the position
— Shows good long speed on tape when he gets into the open field
— Can burst into the second level and isn’t going to be caught from behind, having multiple 50+ yard runs on his resume
— Does a good job getting the corner on outside runs, accelerating up the running lane
— Hits the hole hard and isn’t afraid of taking on contact as a runner
— Will keep his legs churning on contact in attempt to pick up extra yardage and drops his pads, embracing contact rather than shying away from it
— Has good vision as a runner, being able to locate the cut back lane or make a quick cut to the side to keep running up field
— Will read defenders coming at him in open space and adjust his running lane, looking to weave in and out of blockers to evade the pursuit
— Can naturally flow with zone running schemes, following his blocks and commits once he sees daylight open up
— Will line up as the wildcat QB in short-yardage/goal line situations
— Has completed every pass attempt thrown when under center, scoring four times with his arm
— Viable pass catcher out of the backfield, having the ability to create separation at the top of his route or stress defenses on vertical patterns up the field/along the sideline
— Willing and capable pass protector when asked to stay home and block
— Has returned five kicks in his career at SDSU

— Angular frame leads to him being more of a high-cut runner rather than having a low center of gravity to make quick cuts
— Lacks the bulk and strength to break more tackles when running in tight quarters
— Lacks the lateral agility to make the first defender miss in open space
— Needs to see the hole to make the cut rather than feel it, often leading to him running into the defense
— Some indecisiveness as a runner shows up when he is reading the block
— Has chances to break back into open space, but struggles as more of a North/South runner
— Willing pass blocker, but needs to sustain blocks more and not have defenders quickly fall off
— Can be smoother catching the ball out of the backfield as a receiver
— Long, lean frame and running style can lead to ball security issues

Pierre Strong came into the pre-draft process behind some of the more well-known names at the running back position, having played his college ball for South Dakota State University at the FCS level. Still, having family and close friends that attend the university in Brookings, I consistently heard rave reviews of Strong as a dynamic runner for the Jackrabbits, having the long speed and burst to consistently rip off big chunk gains on the ground. Given the fact that Strong has recorded 10 50+ yard TDs in his career, it would be fair to say that he can be a home run threat in the open field as evidenced with his impressive Combine performance (4.37 40).

Strong is a lean, high cut runner that excels when running outside zone concepts where he can use his speed and rhythm as a runner to get to the outside of the defense and rip off big plays on the ground. He does a great job following his blocks and getting what is blocked for him as evidenced on this play against UC Davis

While not the biggest runner in terms of stature (5’11 3/8”, 207lb), Strong runs hard behind his pads and keeps his legs churning on contact. He isn’t afraid to drop his shoulder down to finish off runs when he knows there will be contact. Watch this run against UC Davis where Strong takes the pitch to the right up the sideline and finishes the run by driving his shoulder into the defender flying in, going through him to pick up extra yardage to maximize the yards gained on the play.

Strong brings a unique blend of burst, effort, and vision to the table as a capable short yardage back. Here against the Coyotes, we see Strong take the hand off near the goal line and bounce it to the right, having one defender to beat on the right side as he drops his shoulder and runs his feet on contact with the defender to cross the plain for the score.

Strong has also operated plenty as a wildcat QB in the Jackrabbits offense, catching the ball on the direct snap when in scoring position, but also has competed all seven passes thrown during his career with four going for TDs. Here is an example versus North Dakota State where Strong takes the direct snap in the red zone and follows his blocks up the middle, plunging into the end zone for the TD.

While a capable runner on outside zone concepts, Strong also excels when running inside zone, having the feel and vision to make a subtle cut to the side to get into open space and have plenty of green grass in which to run. Check out this rep versus the Bison where Strong takes the handoff on what appears to be more of an outside zone concept, but he cuts back inside as the defense overcommits to the outside, getting into open grass where he proceeds to rip off a 30-yard run before being escorted out of bounds.

Here is another example versus UC Davis where we see Strong’s vision come out as he weaves through the defense on the inside run, shooting up through the hole and makes a quick cut to the right to evade one tackler before he gets dragged down by others in pursuit after picking up the first down.

As mentioned earlier, Strong does a good job following his blockers and weaving through traffic at the second and third levels of the defense as you can see on this next clip, redirecting multiple times to put two defenders in a spin cycle as they try to turn around to find him before he eventually gets tackled in the red zone.

When it comes to catching the ball, Strong does a good job at generating separation as a route runner in the intermediate portions of the field and is a viable check down option in the short game as well. He also can put linebackers and safeties in a state of conflict when he works vertically down the seam or on the wheel route like we see on this play against Minnesota, running out of the backfield up the seam and catches the pass in-stride for the long TD.

Strong not only is usable as a passing game option, but he also has the skill set to viable pass protector on third downs as well. Here against USD, we see Strong locate the nickel defender coming off the edge on the blitz and squares him up, punching inside his chest and runs him away from the pocket to give his QB time to throw.

Still, while Strong has some good qualities as a runner, he shouldn’t be likely viewed as a feature back at this time. He isn’t a great tackle breaker, as he doesn’t generate a ton of power up the middle. While he does a good job with his eyes and follows his blocks, he shouldn’t be considered overly elusive in the open field, lacking that short area quickness to get out of trouble when defenders have an angle on him. Here is an example where Strong starts off well on the inside handoff, bouncing to the outside and then cuts to the left, but is unable to get away from the diving tackle attempt by the safety.

Strong also tends to have a running style that could lead to potential turnovers in the league should he not put an emphasis on protecting the football. On this run against USD, we watch Strong catch the short toss on the run to the left side, but as he attempts get skinny around the linebacker, he exposes the ball that the defender puts his helmet on to jar it loose, causing it to hit the turf. The offense luckily falls on it, but Strong’s decision to expose the ball in a way like Jerome Bettis’s fumble against the Colts so many years ago also cost the Jackrabbits a possession.

Overall, Pierre Strong is a talented runner that dominated his level of competition and followed that up with a strong showing at both the Shrine Bowl and the NFL Combine. He is a perfect fit as an outside zone runner that can gash opposing defenses while also having the skill set and vision to work well in inside zone concepts. He has shown promise as both a pass catcher and pass protector but needs to improve his consistency at both to likely earn the role of being a three-down back at the next level.

When I was trying to find a pro comparison for Strong, Tevin Coleman of the Jets immediately came to mind as a similar runner that has excelled in the Shanahan zone run system and has the same level of athleticism in terms of long speed (4.40) and burst. They share nearly identical frames with Coleman standing 5’11 3/8”, 206lb, with 32” hands, but also lack that ideal lateral quickness to make defenders look silly in space, being more of a one speed, rhythm runner.

The Steelers had offensive assistant Matt Tomsho and College Scouting Coordinator Phil Kreidler according to Alex Kozora’s findings, and while it was reported that they had spoken to QB Chris Oladokun, I’d wager they were there to also get a good look at Strong as a potential option later in the draft that could be a compliment to Najee Harris in the backfield. Given Strong’s skill set, he’d be a great pairing with Harris as a 1-2 punch with Harris being the “thunder” and Strong being the “lightning”.

It remains to be seen how much emphasis Pittsburgh puts on adding another running back this offseason but given the continued emphasis to improve the running game, adding a player with Strong’s qualities could add some much-needed juice in the backfield.