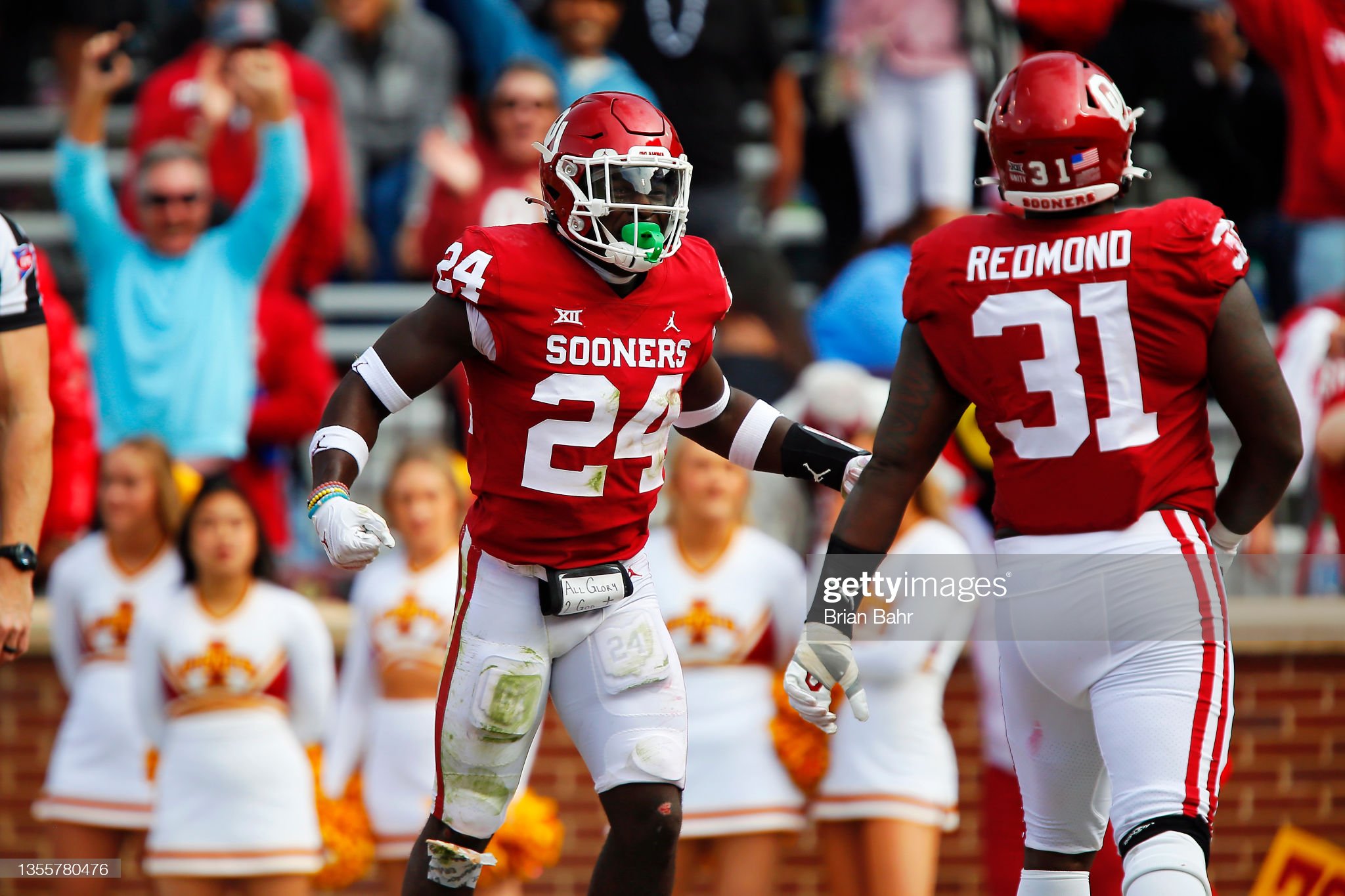 From now until the 2022 NFL Draft takes place, we hope to scout and create profiles for as many prospects as possible, examining their strengths, weaknesses, and what they can bring to an NFL franchise. These players could be potential top 10 picks, all the way down to Day 3 selections and priority undrafted free agents. Today, I’ll be profiling a linebacker prospect that flew around making plays all over the field in the Big 12 this past season, but his lack of size and exact positional fit raise questions where he will find a home at the next level.

— Possesses great play speed and range as an off-ball LB
— See-ball, get-ball linebacker that is quick to trigger downhill or fly sideline to sideline
— Aggressively pursues the football, covering ground in a hurry
— Attacks scape angles to the football, doing his best work unblocked as a heat-seeking missile
— Made plenty of tackles on his own be the first man on the scene
— Physical tackling style looks to punish ballcarriers on contact
— Can redirect once he makes his read and flow to the football as a natural runner in space
— Has the movement skills to work around blocks and evade trash as he chases the football
— Breaks on the football quickly in zone coverage, limiting yards gained after the catch
— Natural mover in space when it comes to running linearly or laterally
— Has room to grow as a coverage defender, having the skill set and athleticism to make more plays on the football
— Should be a viable cover man on special teams units

— Smaller, slender frame that will get exposed against heavy power run schemes at the next level
— Struggles to fight off blocks and with get engulfed by size by OL
— Will over pursue the football due to aggressive nature, leading to him being out of position to make the play
— Fails to consistently maintain gap integrity as a run defender
— High-cut defender that runs upright and will tackle high on the shoulders, leading to missed attempts
— Poor balance leads to him on the ground far more often that you’d like
— Has the capability to cover backs and tight ends, but can struggle with positioning and his transition which lead to completions
— Questions linger if he is better suited as a box safety type rather than a traditional linebacker due to lack of size

Brain Asamoah decided to leave the Buckeye State as a high school recruit and take his talents to Norman to play for the Oklahoma Sooners. After a redshirt season, Asamoah found himself a fixture on defense for Sooners, becoming a value member that has led the team in total tackle each of the last two seasons. Asamoah is a lean, explosive linebacker that excels when asked to work in space and play run-and-chase on the football. His tenacity and aggressiveness in pursuit show up in him making numerous tackles flowing to the sideline like we see on this two-play sequence versus Baylor.

Asamoah has great speed (4.56 40) and explosiveness (36.5” vert) for the position, effectively covering ground and closing space on the ballcarrier in a hurry. He can take good scape angles to the football and can sift through trash, working around blocks to make plays on the football. Here is one example against Texas where Asamoah quickly attacks the sideline, dipping under the block attempt by the OL and wraps up the back right as the LOS.

Here is another example of Asamoah taking a good angle to the football on the stretch run to the bottom of the screen. He does come in high and over pursues the football a little bit, but he manages to get a hand on the ballcarrier which allows the rest of the defense to rally to make the TFL. Asamoah tends to go high on his tackle attempts which should be cleaned up to avoid broken tackles at the next level.

Asamoah is also effective chasing the QB when asked to spy the passer or react when he decides to tuck and run. Here is another two-play sequence against Oklahoma State where Asamoah reacts to the passer leaving the pocket and shows off his speed in the open field to run him down to make the play.

Here is another example against the Cowboys where Asamoah quickly reads the QB run and sprints toward the runner, aggressively wrapping him up by the shoulders and swings him down to the ground for the takedown.

Asamoah’s play speed and aggressive play style also make him an effective downhill player, being quick to trigger and work through gaps to make plays on the football. Here is a play against the Bears where Asamoah shoots through a gap at the LOS to wrap up the tailback in the backfield for a loss of yardage on the play.

Asamoah’s speed and instincts also are a plus when he is asked to drop into zone coverage, having the ability to close the space on the receiver once the ball is thrown and bring him down quickly to prevent much yardage gained after the catch. Here are just a few examples of Asamoah quickly arriving at the pass catcher to take him down to the ground.

Still, there are several key aspects that don’t play into Asamoah’s favor in his projection to the NFL. For a traditional linebacker, Asamoah lacks the ideal size and play strength to effectively take on and shed blocks in the run game. This lack of size can lead to him getting overwhelmed at times by OL who get onto his frame and drive him back, not having the ability to work off the block. Here is one example against Baylor where Asamoah gets picked up and ran down the field like a sled by the center, driven back nearly 20 yards as the runner rips off a big gain on the ground.

Asamoah’s aggressive play style also leads to him getting out of position at times, not taking effective angles of pursuit to the football, thus leading to large cutback lanes. Here is a clear example from the same game where #7 Abram Smith take the handoff to the right and proceeds to cutback as Asamoah flows too far to the side without keeping his shoulders square to the LOS to push off his left foot laterally to get back in position to make a play on Smith who shoots through the hole for a nice gain.

Overall, Asamoah is that classic “tweener” that defenses are utilizing more and more in today’s game as that fast, explosive, sideline-to-sideline linebacker that plays chase to the football and does his best work working east-to-west. He is quick to trigger downhill and can be an effective zone coverage dropper but lacks the size to take on blocks consistently as well as the inconsistent angles of pursuit to the football due to his aggressive pursuit style. He will have to be able to break down better as a tackler and lower his strike zone if he wants to become a more efficient finisher at the next level as a likely 3-4 weakside ILB or a 4-3 WILL that allows him to play unblocked.

When watching Asamoah, Akeem Davis-Gaither of the Cincinnati Bengals came to mind as another slender, juiced-up linebacker that plays a similar game. Davis-Gaither has nearly identical measurables (6’1 1/2”, 224lb) and athletic traits as Asamoah and played in a similar role coming out of Appalachian State. His lack of size makes him a potential liability as a stack and shed linebacker, but his ability to run down the football in space as well as maneuver in zone coverage make him an ideal weakside/sub package LB that can also dabble in some box safety. Davis-Gaither was taken in the 4th round of the 2020 NFL Draft, and I foresee Asamoah also likely being an early Day Three selection.

The Steelers had Area Scout Kelvin Fisher on-hand for the Oklahoma Pro Day on March 9 and could use another LB behind the likes of Devin Bush and Myles Jack on the depth chart. However, given the measurables and play style of Bush and Jack, Asamoah feels like a similar retread rather than providing something Pittsburgh lacks in a traditional BUCK LB which is I would think they would target. Still, Asamoah has some intriguing traits and the play speed you want to see at the LB position, and depending on where he ends up being selected, he very well could contribute sooner than expected for an NFL defense.