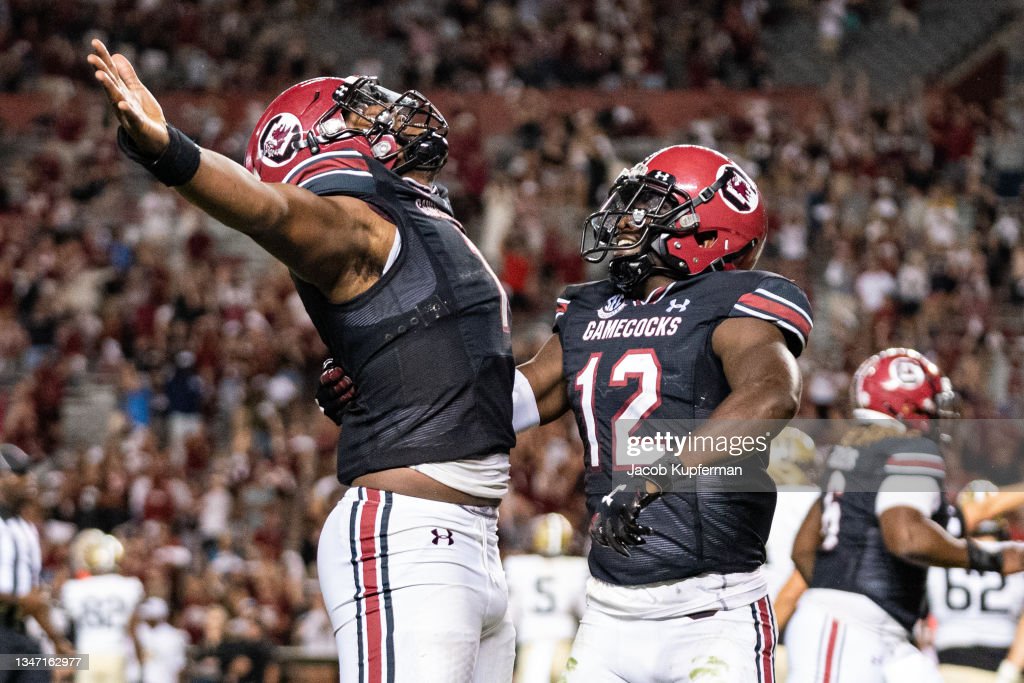 From now until the 2022 NFL Draft takes place, we hope to scout and create profiles for as many prospects as possible, examining their strengths, weaknesses, and what they can bring to an NFL franchise. These players could be potential top 10 picks, all the way down to Day 3 selections and priority undrafted free agents. Today, I’ll be profiling an edge rusher prospect that flashed at times in the SEC but may need some development in order to make an impact at the next level.

— Great size and length for the edge rusher position
— Has good bulk to fill out his frame
— Has long arms to punch blockers and keep them at bey off his chest
— Plays with heavy hands when taking on blockers both against the run and as a pass rusher
— Explosive for his size and likes to play with his hair on fire in pursuit of the football
— Can sit down and hold his own at the point of attack against the run and keep outside contain
— Will bring the boom as a tackler when he has his competition squared up, looking to plant them into the ground
— Occasionally will use the slap move to shock blockers as he attempts to win as a pass rusher

— Doesn’t have amazing play speed or burst off the ball on the snap
— Isn’t overly twitchy and can struggle redirecting in the open field
— Can struggle to bend the corner and get around the edge
— Doesn’t possess a go-to counter move and mainly relies on straight power as a rusher
— Hand placement needs to improve to keep blockers from getting inside his chest, thus stalling his rush
— Doesn’t consistently generate a push of the pocket as you would like to see from a skilled power rusher
— Can lose gap integrity as a run defender as well as play too high and upright, leading to balance issues against the run
— Tends to play with hesitancy and must see it with his eyes leading to segmented movement
— Doesn’t play with the strength and power that his frame would suggest
— Play style better suited as an inside run defender rather than an edge rusher

— Senior prospect from Atlanta, GA
— Born Jan. 18, 2000 (age 22)
— Guided his high school team to a 14-1 record and a Georgia Class AA state championship as a senior
— Ranked as the 10th-best strongside defensive end in the nation via 24/7Sports
— Graduated high school in December of 2017 and enrolled at South Carolina in January
— Saw action in 12 games as a true freshman, collecting 20 tackles (12 solo) with three tackles for loss and a sack and was credited with three quarterback hurries and a pair of pass breakups
— Played in all 12 games making one start as a sophomore where he was credited with 27 tackles including 16 solo stops, seven tackles for loss, 3.5 sacks, and notched three quarterback hurries
— Played and started eight games at the BUCK position in 2020 where he led the team with six sacks and with three forced fumbles to go with 30 total tackles (16 solo) and seven TFLs
— Recorded 44 tackles (29 solo), including a team-high seven tackles for loss and a team-best 4.5 sacks, registered 11 quarterback hurries on the season and was credited with two pass breakups, a forced fumble, and a fumble recovery
— Permanent team captain for the 2021 season
— 2021 Co-Steve Wadiak Award -Team MVP (2021), First-team All-SEC (2020)

Kingsley Enagbare has been a name floating around the NFL radar for some time now thanks to his work in the SEC the last two seasons. He managed to see action right away for the Gamecocks as a true freshman, rotating in as a pass rusher until he earned a full-time starting job in 2020. When you watch Enagbare play, you see a big, strong edge defender that has been touted for his ability to create pressure on the QB. Pro Football Focus has named Enagbare one of the most disruptive edge rushers in this draft class, having 11 hurries in 2021 alone. Here is one example against the Aggies where Enagbare doesn’t get home, but he manages hurry the QB into the throw.

Enagbare plays often with an intense pursuit of the ball, chasing the QB in the pocket or running after backs from behind. He likes to try and win inside as a rusher, using his athleticism to get past slower guards. On this rep against Georgia, we see Enagbare crash inside in-between the LT and LG, split through them, and manage to get the sack. He does get high on the inside move and gets knocked off his feet a little bit, but he manages to gather his balance and finish the play.

As mentioned above, Enagbare will provide pursuit of the ball as a run defender as well, playing chase as a backside pursuit defender like we see on this rep versus Texas A&M where he comes off free on the left side and chases down #28 Isaiah Spiller from behind for the tackle.

Here is a similar example against Kentucky where Enagbare shoestring tackles the runner in the backfield for a short loss of yardage.

On this rep against Kentucky, we see another example of a hustle play by Enagbare where he notices the WR tunnel screen pass and immediately pivots to play chase of the receiver, running him down and brings him to the ground to limit yards gained after the catch.

Enagbare plays with heavy hands and his arm length allows him to keep blockers off his frame and extend them in attempt to rip off and make plays. His style as a power rusher makes him effective at times as a run defender, having the strength to crash inside like we see on this run stop against the wildcats where Enagbare crashes down the line to get in on the tackle after crossing the TE’s face.

Still, there are plenty of areas Enagbare needs to clean up in his game to maximize his abilities as an edge defender to contribute at the next level. He likes to cheat inside as a run defender, often relying too much on his eyes where he tends to guess where the ball is going rather than playing assignment-sound football. Here is a play where Enagbare closes the edge on the counter run to the right but fails to maintain outside contain with #55 Kenyon Green pulling from left to right to pick up Enagbare, standing him up and walking him back as Spiller picks up a nice gain on first down.

Despite being known as a power rusher, Enagbare has a real tough time fighting off blocks. He doesn’t have a well-developed pass rush arsenal and his ability to convert speed to power is shaky at best. Often blockers will get their hands on his chest and neutralize him for the entire rep like we see on this play against Texas A&M where Enagbare can’t shed the LT after the TE helps to chip before going out on his route.

Enagbare also has a bad habit of getting high as a pass rusher or when attempting to get skinny inside or around the edge, leading to balance issues which result in him ending up on the ground. Here is one example where Enagbare slap/arm over move where he manages to clear the blocker who drops his head, but Enagbare is unable to keep his balance and redirect to the ball, slipping to the turf as the runner picks up the first down.

Overall, Kingsley Enagbare is a nice-looking edge defender that has the size and length to be a disruptive player. You often here scouts and coaches say that a player “looks the part”, and that would be exactly the case with Enagbare. However, I tend to think after watching Enagbare play that he also fits the stigma “looks like Tarzan but plays like Jane” as an occasionally disruptive presence, but not a productive player for what you would hope for of a player of his size and skill set. There are traits there with Enagbare, but he does leave a lot to be desired.

One player that I researched that compared well to Enagbare is former Texas Longhorn EDGE Alex Okafor. Okafor too was highly touted for his size and skill set coming out of Texas, also often drawing high projections in draft rankings before having a subpar pre-draft process and eventually got taken in the fourth round of the 2013 NFL Draft. He has managed to be a part-time starter in the league, having his best season in his second year with the Cardinals, but has been best suited as a complimentary edge rusher to more well-rounded defenders. Given Enagbare’s skill set and the vast similarities in terms of measurables and athletic testing I could see he and Okafor sharing a similar career arc in the league.

The Pittsburgh Steelers recently brought in Genard Avery to serve as depth to depth behind T.J. Watt and Alex Highsmith at EDGE, but Pittsburgh would benefit from adding another young, developmental pass rusher to groom and sub in to give their starters a much-needed breather here and there. Enagbare could figuratively be that guy but given his limitations as a pass rusher usage mainly as a core run defender, Pittsburgh may be wise to look at other EDGE options in this draft class that bring more to the table in terms of rushing the QB as well as being able to contribute on special teams.