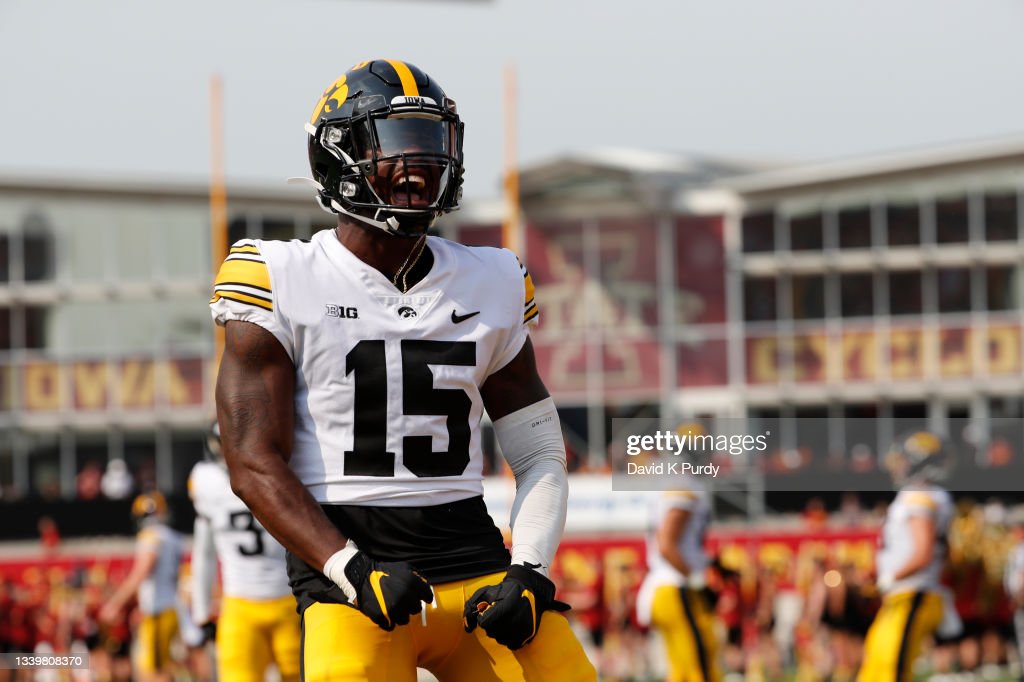 From now until the 2022 NFL Draft takes place, we hope to scout and create profiles for as many prospects as possible, examining their strengths, weaknesses, and what they can bring to an NFL franchise. These players could be potential top 10 picks, all the way down to Day 3 selections and priority undrafted free agents. Today, I’ll be profiling a running back prospect that starred for the Black and Gold in my home state and looks to capitalize on his final season’s performance as he transitions to the NFL.

— Has experience playing in a pro-style system as the feature back
— Possesses good acceleration and burst when he gets into open space
— Has enough lateral quickness to jump cut to the side to make defenders miss in space
— Can spin out of contact when he sets up a defender properly
— Not afraid to go up the middle and run into contact
— Has the vision and patience to follow his blocks and wait for things to open up
— Showcased the ability to be a viable pass catching option out of the backfield on screens and check downs
— Lined up out wide as a receiving option in the passing game, winning on shallow crossers and other route concepts as a receiver
— Took snaps as the wildcat QB in the offense to get him the ball with blockers in front
— Willing and capable pass protector that squares up blitzers and can absorb contact with a strong base

— Lacks ideal size you look for in a three-down running back
— Struggles running with power and will get dropped by sure tacklers on contact
— Lacks that second gear as a runner, regularly having the competition catch him in the open field if they have the angle in pursuit
— Doesn’t possess great lateral movement skills, being limited when it comes to his ability to bounce runs or escape defenders in front of him
— Isn’t the most decisive runner when running inside, taking too many false steps rather than hitting the hole
— Ball security can be an issue giving his lack of size
— Can play with more awareness as a pass catcher and runner of the football to secure the catch or hold the ball tight on contact
— Isn’t a refined route runner or separator as a pass catcher when split out wide

— Junior prospect from Sewanee, GA
— Born November 10, 2000 (age 21)
— Rated a three-star recruit and committed to play college football at Iowa over offers from Nebraska, Iowa State, Indiana, and Michigan State
— Named Georgia Player of the Year as a senior in 2018 and was named All-State his senior season while being nominated a team captain as a junior and senior
— Also lettered in baseball, basketball, and track as a four-sport athlete
— Saw action in all 13 games, with four starts as a true freshman where he led team in rushing and attempts with 134 attempts for 638 yards (4.8YPC) and five touchdowns and had 24 receptions for 166 yards
— Led team in rushing with 762 yards on 143 attempts (5.3YPC), with seven touchdowns and recorded 15 receptions for 152 yards in eight games played in a pandemic-shortened 2020 season
—  Capped off his college career with 256 carries for 1,151 yards (4.5YPC) and six TDs on the ground while chipping in 31 receptions for 247 yards and a score through the air in 13 games played
— One of ten juniors named to 2021 Player Council in 2021, Third team All-Big Ten (2021), First-team All-Big Ten (2020)

RB Tyler Goodson got to Iowa City shortly after I left town after working in the Football Strength and Conditioning Department during the spring of 2019 for the Hawkeyes, but I have seen plenty of the Iowa running back the last three seasons in lead up to the 2022 NFL Draft. It was evident that Goodson was the best back on campus as early as his freshman season, having that juice and burst that the other backs just didn’t bring to the table. Still, Goodson was fairly frail of frame coming into college, and needed time hitting the weights hard to get his body right for the rigors of Big Ten football.

When you watch Goodson play, you see a back that maximized the run-heavy system at Iowa. He does a good job following his blocks with the inside zone system they use, waiting for things to develop in front of him before hitting the hole when he sees daylight. Watch this long run to ice the game against Nebraska and Goodson’s ability to follow his blocks up through the second and third levels of the defense, breaking into the open field when he finally gets caught by #5 Cam Taylor-Britt who tracks him down along the sideline.

He has the burst to get to the corner and then enough acceleration to get moving down the field when he sees green grass like on this long TD run against Indiana. Goodson does a good job getting to the sideline and manages to sneak into the end zone for the score before the defender can run him down from behind.

Goodson also has subtle shiftiness in the open field, having the movement skills to give a quick cut to the side and make defenders miss in space. Here are a couple of clips against the Hoosiers and Cornhuskers where Goodson makes defenders look silly in space, sidestepping the tackle attempt to get up field and pick up additional yardage.

Seeing as Iowa isn’t known for having the greatest weapons in the passing game at the receiver position, Goodson was often asked to line up wide as a pass catcher while also being utilized out of the backfield. While he doesn’t generate a ton of separation as a receiver, he can effectively catch the football and make a play after the catch with the ball in his hands much like we see on this catch and run against the Cyclones, sidestepping one defender and stiff-arming another to get to the first down mark.

Despite being 5’9, 197lb, Goodson is a capable pass protector who is willing to step up and take on backers as a blocker. He plays with good pad level and will square defenders up with his pads before punching like we see on this blitz pick up against Iowa State, giving #7 Spencer Petras time to find his receiver down the field.

Still, there are several aspects that tend to cap Goodson’s upside and hopes of being a feature back at the next level. He noticeably lacks that feature size and can struggle running through contact, lacking the power to run through tackle attempts and move the pile. Single tacklers will often bring him down on first contact if they have a clean shot on him like we see on this tackle attempt.

Goodson’s size also leads to concerns of ball security and the ability to hold onto the football when taking big hits. Here against Nebraska, we see Goodson start a successful run up the middle but takes a shot by the defender near the first down marker that jars the ball loose which the defense recovers.

Going along with ball security is overall awareness both as a ball carrier and pass catcher. As mentioned earlier, Goodson doesn’t run the cleanest of routes as a pass catcher and when he does get open, there are instances where he doesn’t act as the primary receiver on the play, not expecting the ball which lead to incomplete passes.

While we did see Goodson rip off some nice long runs earlier, he lacks that juice to pull away from defenders as a runner, often failing to be that home run threat in the open field despite a 4.42 40 time. Along with that, even though he can sidestep defenders in open space, he isn’t the most elusive back out there, lacking that feel and foot quickness to turn something out of nothing or bounce it if his initial running lane is bottled up. Here is an example against Iowa State where the running lane isn’t there, but Goodson doesn’t push laterally with his right foot, turning his shoulders and gets cornered by pursuit for a loss of yardage.

Overall, the athletic testing at the Combine would suggest that Tyler Goodson could be a nice speed back at the next level to compliment a bigger power back. However, the fact of the matter is Goodson simply lacks that top-end speed and explosiveness to really challenge defenses he also lacks the ideal size and power to be a consistent grinder in-between the tackles, profiling more as a change-of-pace runner who does his best on inside zone concepts where he can follow his blockers into the second level, make one defender miss, and attempt to rip off chunk gains.

One name that come to mind as a pro comparison for Goodson is current Miami Dolphins RB Salvon Ahmed. Ahmed shares nearly identical measurables as Goodson from a size perspective as well as a testing perspective outside of the 40-yard dash, even though both runners shouldn’t be considered home run threats. Both backs bring some wiggle to the table in terms of elusiveness and are capable pass catchers who can make plays out of the backfield as well as out on a route. Ahmed has primarily been a backup with the Dolphins after going undrafted out of Washington, and I foresee Goodson likely facing a similar track to the league as a late-round draft pick and a likely backup to start his career.

The Pittsburgh Steelers could use a backup running back to compliment Najee Harris in the backfield, and while Goodson has some good flashes, I just don’t know what he brings to the table at this time with Benny Snell Jr. being a better power back and Anthony McFarland Jr. having more juice as a speed back. Goodson could come in as a Day Three pick or possibly a UDFA and compete for a backup role, but Pittsburgh would be better off looking at other options to provide another element to the rushing attack that they currently don’t have on the roster.