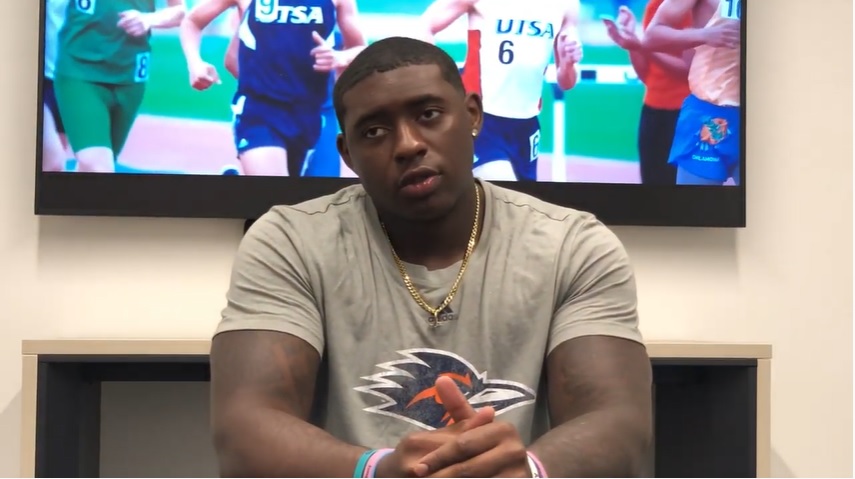 From now until the 2022 NFL Draft takes place, we hope to scout and create profiles for as many prospects as possible, examining their strengths, weaknesses, and what they can bring to an NFL franchise. These players could be potential top 10 picks, all the way down to Day 3 selections and priority undrafted free agents. Today, I’ll be profiling a four year starter with experience at multiple spots on the offensive line.

— Four year starter
— Experience starting at every OL spot except center
— Very good length with nearly a seven foot wingspan
— Good agility and mobility
— Consistent pass set and uses his length well
— Sand in the pants to anchor versus power rushers
— Handles twists, stunts and cross face rushes well
— Can play in multiple run blocking schemes
— Strength to move defenders and quickness to cut them off
— Will play with a nasty demeanor
— Mobility to pull, climb and lead on screens

As a four year starter with those starts coming at four different positions you have to like he experience that comes with Burford. He is a bit light but has a big bubble with sand in the pants and he has very good length. Athleticism is evident within his tape and he’s got an aggressive streak as well.

As a pass blocker, he has solid snap quickness and a consistent set with solid pad level with his hands extended in front. His hand placement is solid and uses his length well to keep pass rushers off of him. Up the arc, he uses his length and play strength to shove defenders past the quarterback. On quick sets he displays good timing with his hands and solid lateral agility to mirror. He has good awareness on pass rusher who cross his face and is solid recognizing stunts and blitzers. Against power rushers, he anchors well and shows good core strength. On screens, he displays good mobility to get out in front and find a target.

Vs Florida Atlantic, Burford (74) faces a speed rusher and uses he strength and length to shove him past the quarterback.

Vs Florida Atlantic, he uses a good half man relationship and hand placement to mirror and then finishes the block when he feels the advantage.

At Western Kentucky, he gets a nice shove on the EDGE penetrating inside and then tosses the looper to the ground in the backfield.

As a run blocker, he is a nice combination of nimble and nasty. His angry side comes out from time to time and he will maul defenders. On Zone runs, he has good quickness and play strength to drive defenders on the front side and on the backside he has quickness to get across the face and can bend and rip into the B gap to cut off defenders and box them out. Moving to the second level he has agility and mental processing to identify his man, position himself well and lock on to linebackers. On Power/Gap runs he fires out with good pad level and leg drive to move defenders on down and double team blocks. When pulling, he turns up field quickly and identifies the most dangerous defender to block.

At North Texas, here are three clips of him pulling to his right and leading through the hole.

At Illinois, he will rip under the defender into the B gap and box him out to provide a running lane.

At Western Kentucky, he will chip and then climb to the second level and then tries to plant a defender into the five yard line.

Vs Western Kentucky, here is another climb to the second level and he cuts off the corner giving the running back a lane to the end zone.

In his pass sets, he is a bit mechanical and rigid. The depth of his kick slide is a bit shallow and leaves him chasing speed rushers and forcing him to reach and push rather than mirror with his feet. His punch in pass pro is not as effective as you might like and he can be pulled forward when defenders get into his chest. Improving his hand strength to lock on to defenders would improve his ability to sustain and play to the whistle. When uncovered he doesn’t consistently look to help teammates or find work.

Vs Florida Atlantic, he tries to push the rusher up the arc but he’s too quick and gives up the sack.

At Illinois, he gets a little wide and the defender chops his hands to get in the pocket. Consistent pass sets seem good but if the defender always knows where your hands are going to be it makes them easier to move.

As a run blocker, his pad level gets high and he doesn’t lock on with defenders slipping out of his grip. His sustain is not always to the whistle and while his initial block may be good he lets defenders slip around him. He balance gets over his toes on base blocks allowing defenders to shed him. When pulling his first couple steps are slow moving laterally.

Overall, Burford is a versatile offensive lineman with starting experience at every spot along the line except center. He has good snap quickness and a consistent set in pass protection using this length to his advantage. His mobility is evident on screens and he handles stunts fairly well. As a run blocker, he has good agility and aggressiveness to get after the defender. He can play in multiple run schemes with the ability to move defenders as well the mobility to pull and get to the second level.

Some teams will view him as a guard and some will view him as a tackle. Being able to play both is big benefit for Burford. His athleticism and play strength gives him the raw traits and improving his consistency from play to play should come with time. Pittsburgh seems set with their offensive line but adding a player like Burford would give them another backup who can play multiple positions.

I think he profiles best as a guard right now but with fine tuning he could play tackle. For a comp, I’ll go with Hakeem Adeniji who also was a four year starter with similar measurables and has played both tackle and guard in the NFL.