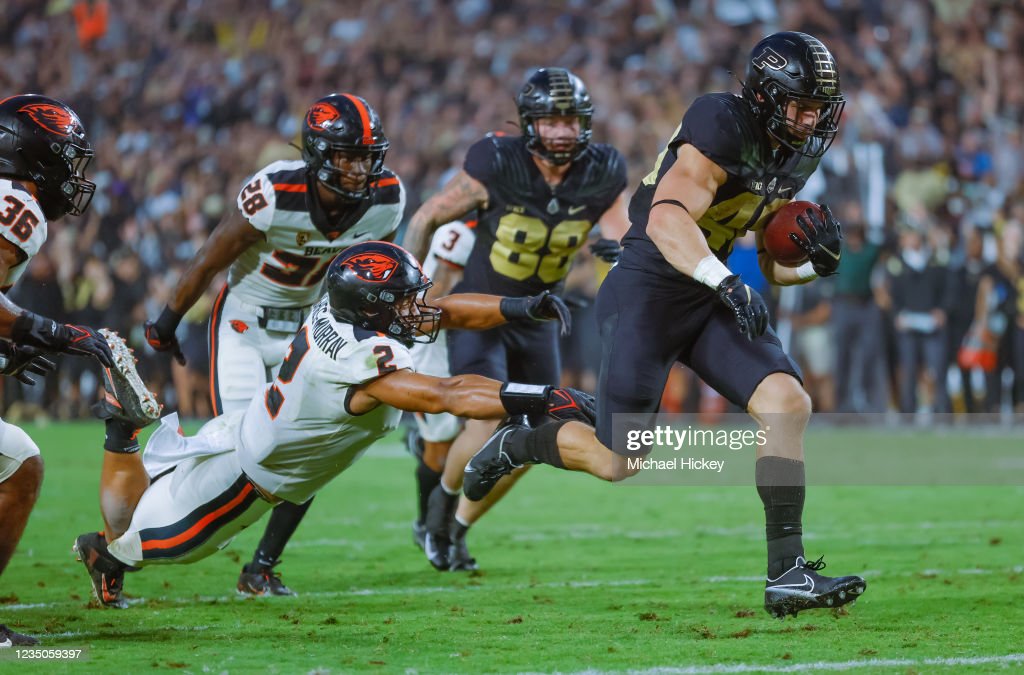 From now until the 2022 NFL Draft takes place, we hope to scout and create profiles for as many prospects as possible, examining their strengths, weaknesses, and what they can bring to an NFL franchise. These players could be potential top 10 picks, all the way down to Day 3 selections and priority undrafted free agents. Today, I’ll be profiling Purdue RB/FB Zander Horvath.

*All numbers from Pro Day

— Impressive size, broad shoulders with big lower half
— Unique athlete with quick feet, moves well for his frame
— Shows leg drive and finish and plays with good power, tough for one guy to take him down and defenders have to bring their all to tackle him
— Shows plus strength and defenders have to swarm him
— Displays contact balance to run through solo tackles
— Quick feet and runs with high knees to step over tackles
— Shows good speed for his frame
— Took care of the football, good ball security
— Soft hands out of the backfield and asset in the passing game, plucks away from his body and doesn’t double-catch, able to adjust to balls thrown outside his frame, caught a fair amount of passes relative to playing time
— Special teams coverage value, experience there first two years of career
— Willing blocker who looked competent when asked, shows good effort and desire to help with frame to get in the way
— Great athletic testing
— Hard-worker who earned his role

— Wasn’t a full-time fullback in college and played less there his last two seasons, will have to make full-time switch in NFL
— Needs to improve technique as a blocker and lining up with his hand on the ground
— Lacks true role and will have to be jack-of-all-trades in offense friendly to his style
— Needs to improve technique in pass protection, ID’ing blitzes and staying square
— Lacked great college production
— Best when given a runway to explode through, has quick feet but can’t always make subtle cuts to pick his way through the lane
— Down senior season, injured early on and took reduced/backup role when he returned
— Didn’t run much of a route tree, largely a checkdown option
— Older than you’d like for a prospect
— Small hands for size

Hat tip to Depot’s Scott Pavelle for bringing up Zander Horvath’s name to me. Horvath popped this draft scene for one of the best workouts of anyone in the pre-draft process, scoring a perfect ten on the RAS chart for a fullback. Numbers across the board are awesome from his size to speed to explosiveness to agility.

So what does the tape say? It largely matches up. Horvath is a fun athlete for being such a big, broad dude with quick feet, change of direction, and half-decent speed. He shows contact balance one-on-one, like this Wildcat touchdown against Oregon State to start the season.

He also plays big and can drive his feet. He didn’t run a ton of guys over Jerome Bettis style but he has good play strength and defenses know they have to bring it to take him on.

Horvath is also an asset in the passing game with soft hands and run-after ability. I like his ability to catch cleanly and adjust to passes not thrown directly into his frame.

Horvath was used as a blocker in portions of his career, especially early on when he scratched and clawed for playin time, but he was more running back than fullback at Purdue. He likely won’t be a RB at the next level, not full-time, and will have to develop more as a blocker and get more comfortable playing in that role. As a former walk-on, I’m betting he’s up for the challenge, but there is a bit of a projection here. He’s also going to have to be that classic guy who wears a lot of hats, not just doing one thing well.

Decades ago, there was another Purdue bruiser who wore #40 – Mike Alstott. Horvath looks like him in size and style but obviously isn’t at that level. It doesn’t help the pro game has changed so much compared to Alstott’s playing days. Horvath’s style is from a forgotten era and he’s a good bit of nostalgia in college football’s spready-happy world.

On tape, he’s a good athlete and can be a serious asset in the passing game. He won’t run an advanced route tree but is a dependable player to throw to after the catch. Horvath is a cross between Dan Vitale and Peyton Hillis and probably falls somewhere in-between. I don’t see enough value to draft him but he’s an interesting UDFA.