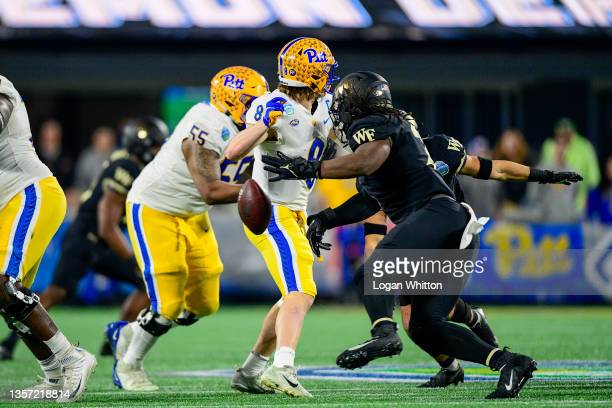 From now until the 2022 NFL Draft takes place, we hope to scout and create profiles for as many prospects as possible, examining their strengths, weaknesses, and what they can bring to an NFL franchise. These players could be potential top 10 picks, all the way down to Day 3 selections and priority undrafted free agents. Today, I’ll be profiling an Edge rusher who quietly had a productive season in the ACC.

— One year of production
— Consistency with snap timing and burst
— Lacked a pass rush plan for most of the year
— Hand usage in pass rush was marginal
— Lacked counter moves when rushing the passer
— Undisciplined as a run defender
— Lost sight of the ball, chased the fake/pulling blockers
— Slow to disengage from blocks

After testing well at his Pro Day I thought I would give Vilain a look. Based on his unofficial numbers he met eight of the ten requirements in Alex’s What The Steelers Look For series. The two he just missed on were his 40 time by .05 seconds and on his 3 cone time by .01 seconds. So he was very close to hitting every category. He was a rotational defensive for the Demon Deacons playing primarily on the boundary side in both a two and three point stance.

As a pass rusher, he displayed good snap quickness and can get up field quickly to stress the outside shoulder of the tackle. When he got to the edge he showed improved hand usage and ability to flatten to the quarterback. He effectively used a chop/rip to get around the edge. As a power rusher he showed good hand placement with power in his punch on bull rushes and potential with his stab move. Later in the year he also added a hesitation move to use his agility and quickness. They ran a lot of twists looping him to the inside which were largely ineffective taking away opportunities. He has a good motor to get after the quarterback and chase them on scrambles. He wasn’t used a ton in coverage but did drop into the flat and pick up running backs out of the backfield.

Vs Florida State, Vilain (2) will rush up the edge and then chase back downhill to force the fumble.

At North Carolina, against the right tackle a good punch to the chest gets the tackle off balance and puts him on the ground.

At Boston College, from the left edge he’ll use a stutter with a stab to the chest of the right tackle to get the edge and get the sack.

Vs Pittsburgh, against the left tackle he will jab step inside and a club/swim to get the edge and accelerates to the QB.

Vs Pittsburgh, against the right tackle he used good acceleration and rips to get under the tackle and force the fumble.

As a run defender, he displayed the play strength, pad level and length to set the edge to force runners back inside. He was solid taking on pulling blockers to clog running lanes and was solid chasing from the backside. Overall, he was a good tackler with good physicality.

Vs Pittsburgh, first he will take on and shed the tight end block to get in on the tackle. In the second, he takes on the pulling lineman to force the play inside.

His snap timing was inconsistent as well as his stride length. He would take short strides rather than exploding at the snap. For most of the season, he had no pass rush plan seemingly just heading up field with minimal hand usage and pass moves. Other than bull, stab and chop/rip he didn’t show much and seemingly has the agility to do more. Many of his pass rushes where straight ahead and ended quickly lacking a counter to get off the block.

Vs Pittsburgh, a lot of pass rushes looked like this especially early in the season. Not much of a plan to get to the QB.

He was undisciplined as a run defender. On the front side of plays he would give up the edge crashing to the inside. Losing sight of the ball occurred when following pulling blockers or chasing the fake rather than following the ball. Timing and technique to disengage from blocks was marginal overall. If he learns to fight through blocks more he probably could have gotten more holding calls.

At North Carolina, here are a couple of plays against the run. The first shows him trying to go inside the tackle rather than holding the edge. In the second, he follows the pulling lineman instead of watching the ball.

Overall, Vilain has good snap quickness and can put stress on the edge. He displayed improvement in his pass rush plan late in the season with better hand usage and mixes up his moves. He has the agility, speed and good motor to get after the quarterback. On the edge, he has the strength and length to be able to set the edge and will take on blockers to clog running lanes.

Areas to improve include consistency in snap timing and up field burst, hand usage as a pass rusher and coming up with a pass rush plan to attack the blocker. Against the run, overall consistency is needed to take on and disengage from blocks, commit to his role from play to play and not lose sight of the ball.

Potential. We hear that term a lot when it comes to the draft and it fits when talking about Vilain. While watching a lot of his film I was waiting for that potential to show and all the ineffective twists they ran him on didn’t help. However, late in the season there was enough to make you see the potential as most of the clips are from that period. He had four sacks in his final two games as well as his best pass rushes. His run defense is rough at this point so if he makes a roster his role would be as a pass rush specialist and special team player.

Pass rushing is a priority in the NFL and guys like this are players teams will take a chance on to fill out the roster. Outside linebacker is position where the Steelers could add depth and Vilain fits the mold physically. He could be a developmental player on the practice squad and if he continues to develop could be a depth player in a year or so. A team could take a chance on him late day three like Shaka Toney and see if they could develop him.

Games Watched: 2021: Vs Florida State, At North Carolina, At Clemson, At Boston College, Vs Pittsburgh