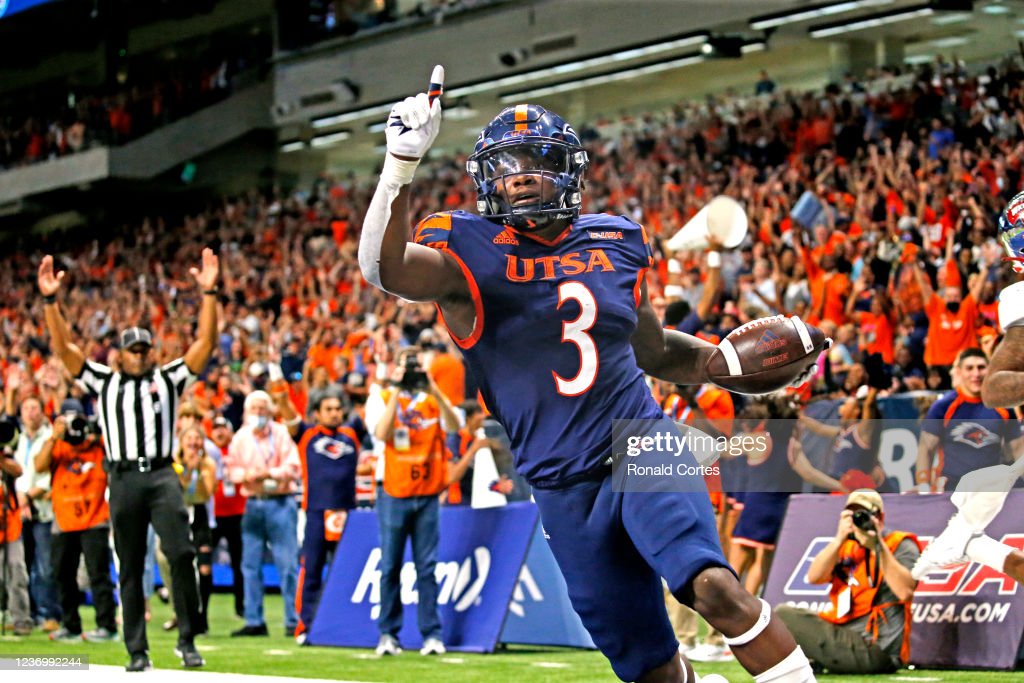 From now until the 2022 NFL Draft takes place, we hope to scout and create profiles for as many prospects as possible, examining their strengths, weaknesses, and what they can bring to an NFL franchise. These players could be potential top 10 picks, all the way down to Day 3 selections and priority undrafted free agents. Today, I’ll be profiling a productive runner from the Conference USA.

— Experience in Gap, Power and Zone run scheme
— Useful jump cut to make players miss in the backfield
— Strong, runs behind his pads and finished forward
— Patience and vision finding gaps inside
— Slippery slides and spins to avoid tackles
— Good contact balance and ball security
— Good hands and adjust around his frame
— Fearless in pass protection to take on rushers inside/off the edge

— Undersized by NFL standards
— Adequate speed overall
— Doesn’t possess the extra gear to get the edge consistently
— Some runs in space halted by ankle tackles
— Limited route tree, mostly check down stuff
— Didn’t see big plays after the catch
— Sustain in pass pro could improve
— Not used as a returner on special teams

McCormick is a three year starter that had his production increase year over year in each of his three seasons. He played in a shotgun offense that saw him line up offset and in the pistol formation that used Gap, Zone and Power running plays in their scheme.

As a runner, he shows good lateral quickness and a useful jump cut in the backfield to avoid defenders. On Power runs, he displays good patience to tuck his stocky frame behind the bigger linemen and reads their blocks well. As a Gap and Zone runner he against is patient reading blocks, looking for the best running lanes and has good burst to accelerate forward.

Vs North Texas, the play is designed to go left but penetration in the backfield closes that off so he uses a stop/start to avoid them and finish with a big run.

Vs Western Kentucky, on a fourth down play he makes a nice jump cut and powers through for a first down. Notice both hands over the ball as well.

Within the hole he is rather slippery using subtle shifts and spins to work through traffic and he runs with good pad level. He was solid at finding yards that weren’t immediately there. He finished forward regularly on his carries tacking on additional yardage and has good contact balance and churning legs. Ball security was not an issue holding the ball high and tight despite the prying hands. His speed is solid contributing several big runs in the games watched. They would also line him out wide and use him on jet sweeps and he was a willing blocker for teammates on similar plays.

At Memphis, on this touchdown I like his awareness to recognize the player coming off the edge and he uses a quick acceleration and hop to avoid the attempted tackle before finishing in the end zone.

At Memphis, he is hit at the line of scrimmage but keeps his legs churning and ends up with an eight yard gain.

At Western Kentucky, here is another play were he finds a gap and accelerates into the second level with a good gain.

Vs Western Kentucky, the inside gap is closed so he cuts outside where a linebacker is waiting for him but he slides to his right making the defenders collide and he gets a nice gain.

Vs Western Kentucky, here are a couple more cuts and bounces. He has a knack for finding yards.

Vs Western Kentucky, yes he does not possess elite speed but he can still provide big runs.

As a receiver, the majority of his receptions came out of the backfield. He wasn’t a big part of the passing offense but was used on swing, stab and flat routes with an occasional wheel route thrown in. When lined up wide it was curl or go routes. He has good hands catching the ball away from his frame and has very good body control to adjust all around his frame. After the catch he was solid finding yards and making a defender miss.

Vs Western Kentucky, a simple swing pass making he makes a nice hands catch and gaining yards after the catch.

A few more examples of his play catching the ball and a look at him after the catch.

In pass protection, he displayed solid mental processing to pick up the free rusher and showed no fear to step up and take on blitzers inside or on the edge. He form is good and he uses good pad level and aggressiveness to stun the defender.

Here are a few reps of him stepping up in pass protection.

Outside Zone is not his best fit. That was the only time I felt he rushed his gap decision on some runs. He is quicker than fast and doesn’t have that extra gear to get the edge consistently. He got ankle tackled in space halting runs with bigger potential. His pass routes were limited overall but that doesn’t mean it can’t be expanded. In pass protection, he could sustain the block better to not the let the defender slip around him. Not used a returner but that may be because he was the starter.

Overall, McCormick is a productive three year player with a stocky build and tough playing style. He played in a shotgun offense utilizing multiple running schemes and shows make-him-miss ability in the backfield while being decisive in his gap choices. He has good initial burst, runs with good pad level and finished forward for extra yards. As a receiver he has reliable hands and was solid adding yards after the catch while being used in the short passing level. He is a willing pass protector with good form and aggressiveness.

Areas to improve include not rushing his gap decisions on outside runs and trying to avoid ankle tackles. He can continue to add to his route tree to become more of a threat out of the backfield as well as putting in the work to master his pass protection ability.

It has been reported that the Steelers met with McCormick at the Combine so there may be some interest there. While I don’t see it as a major need to add depth to the backfield it is something the team will look to do.  He doesn’t have the blazing speed that some might prefer but McCormick is a player who could be a three down backup to spell the starter and his scheme versatility would be an asset.

While looking for comp I found a player with similar size and speed who also had similar strengths and weaknesses coming into the league. Devonta Freeman had a very successful career as a fourth round pick as smaller back with 4.58 speed.