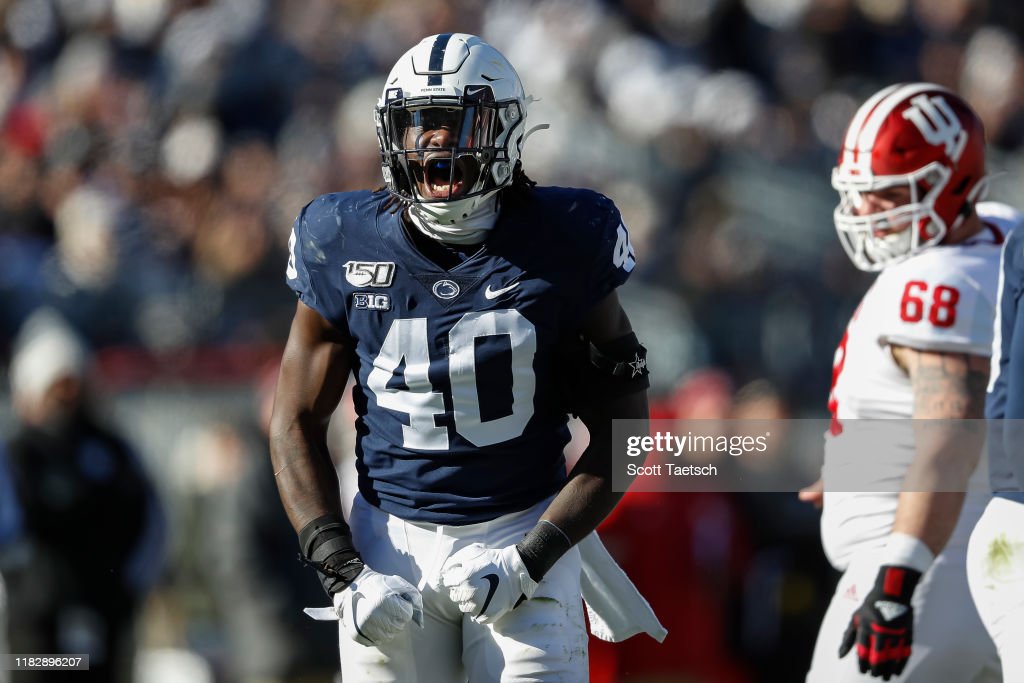 From now until the 2022 NFL Draft takes place, we hope to scout and create profiles for as many prospects as possible, examining their strengths, weaknesses, and what they can bring to an NFL franchise. These players could be potential top 10 picks, all the way down to Day 3 selections and priority undrafted free agents. Today, I’ll be profiling a linebacker/edge rusher hybrid that was asked to wear plenty of hats during his time at Penn State and has been generating a fair amount of buzz during the pre-draft process.

— Outstanding football character and leadership (three-time HS team captain, two-time college team captain)
— Athletic defender that was asked to play a variety of roles for the defense
— Lined up at inside linebacker, outside linebacker, rush linebacker, and as a base defensive end in college
— Team-first player that will play wherever he is asked to go and give full effort at that spot
— Has lower body twitch and explosiveness when taking on blocks or when converting speed to power
— Plays with a fair amount of pop in his punch, taking on blocks in attempt to stack and shed
— Shows great pursuit of the football as a backside chase defender as well as an off-ball, sideline-to-sideline linebacker
—See ball//get ball mentality when playing off the ball
— Reliable tackler in the open field
— Does a great job using his quickness and low center of gravity at shooting gaps inside and crossing the face of offensive linemen
— Does a good job swiping the hands away of blockers or getting skinny to evade blocks
— Can rush with speed off the edge and will flatten inside to get to the ball
— Has experience dropping into coverage over the middle of the field and into the flats
— Will likely be a core special teams contributor Day One

— Lacks exceptional length and frame for the edge position
— Speed and explosiveness as a defender is good, yet not exceptional
— Closing speed to the ball is only average
— A bit leggy as a defender, resulting in him getting driven back against powerful blockers against the run
— Will struggle to counter off blockers once they have a hold of his torso given his lack of brute size and strength
— Has a variety of ways he rushes the passer, yet doesn’t possess a go-to pass rush move
— Hand usage can stand to improve to shed blocks on the edge more consistently
— Doesn’t have great bend and balance as a pass rusher, resulting in him slipping occasionally when attempting to get the corner
— Has shown the ability to drop into zone coverages, but instincts and reaction skills aren’t exceptional as can struggle running with backs and TEs in man

— Senior prospect from Ottawa, Ontario
— Born January 15, 1999 (age 23)
— Attended Mercyhurst Prep in Pennsylvania for high school
— Rated as a four-star prospect by all three major recruiting outlets – 247Sports, ESPN and Rivals as an off-ball LB
— Also played basketball as a high school athlete
— Appeared in 12 games where he notched seven total tackles (five solo), mainly playing on special teams units
— Appeared in 13 games, making two starts in 2019 and recorded 24 total tackles (15 solo) and four PBUs
— Appeared in nine games, making eight starts, was selected as a team captain, made 59 tackles, including 31 solo stops, to go along with 2.5 tackles for loss, a fumble recovery and three pass breakups
— Appeared in 12 games as a senior where he recorded 61 total tackles (34 solo), 8.5 TFLs, 0.5 sacks, and an INT returned for a TD, was selected a team captain for the 2021 season
— Majoring in criminology

Jesse Luketa is the latest Penn State LB/EDGE rusher to make the transition from the college game to the pros. Luketa started out as a native of Canada but transitioned to Pennsylvania to become one of the best players in the state and one of the best LB recruits in the nation. After signing with the in-state Nittnay Lions, Luketa first started off as a special teams ace to begin his career before seeing action at both ILB and OLB in Happy Valley. He quickly earned the trust of teammates and coaches alike, becoming a two-time captain and emotional leader for the Penn State defense.

When you watch Luketa, you see a highly versatile defender that has been asked to wear a lot of hats. He primarily started playing as an off-ball LB, showcasing good instincts and reliable tackling ability in the open filed like we see on this play he makes against Nebraska, filling the hole, squaring the QB up, and brings him down in space.

Luketa’s motor is always running hot, showing great pursuit of the football as a run-and-chase defender. When asked to play in the box, Luketa can cover ground in a hurry to minimize the space between he and the ballcarrier like we see on this rep against Maryland, quickly triggering downhill on the screen pass and keeps the back to just a modest gain on the play.

Here is another example from this past season against Arkansas in the Outback Bowl where Luketa quickly diagnoses the WR screen play to the left side of the field and takes off to the receiver anticipating the screen pass, taking a great angle to cut off the ballcarrier and puts him on the ground, having the ball pop out as the receiver hits the turf.

Luketa showcases that same effort in pursuit when rushing off the LOS as an edge defender as well. Whether it be as a pass rusher or as a backside pursuer against the run, Luketa gives all-out effort on every rep like on this play against Wisconsin where he manages to chase down the back from behind and tackle him in the backfield for a short loss.

Despite being a little leggy as a defender with a slenderer lower half, Luketa plays with a fair amount of power in his hands, coming with a heavy punch to shock blockers back on contact in attempt to work off blocks and make plays against the run. Here is a two-play sequence against Illinois from a year ago where Luketa blows up the TE on the first play to make the tackle and then swims over now Steelers OL Kendrick Green as an off-ball linebacker to make another stop.

Not only can Luketa win with power at the point of attack, but he also does a great job shooting inside and using his quickness to evade blocks when playing on the LOS. Here against the Badgers, we see Luketa give the RT a nice two-hand swipe to clear him out of the way on his inside move to get in position to wrap up the back coming his way and take him down to the ground for a TFL.

Now, Luketa was asked to transition from the off-ball LB spot to more of a conventional edge rusher this past season at Penn State. While he only has half a sack on his resume for his career, Luketa has shown that he has the pass rush prowess to be effective when called upon in that area. One just needs to go back to the Senior Bowl and watch the week of practices where Luketa was constantly winning one-on-one matchups with tackles which ended up translating well to the game where he picked up two sacks that are shown below of him winning on the speed rush.

Still despite Luketa’s versatile skill set, he tends to fall into that category of a “tweener”, lacking the exceptional movement skills in space to be a reliable three-down off-ball LB while also lacking the prototypical size and length that translates to a dominant edge rusher. While he plays with a fair amount of power and shock in his hands, he tends to struggle against size when blockers get a hand on him first, being unable to counter or shed off the block. Here is one example against Wisconsin where Luketa tries to spin inside on the LT, but immediately gets walled off and can get off the block as the QB has time to scramble and pick up some yards.

While Luketa displays some promise as a speed rusher, he isn’t overly bendy around the arc and have some balance issues when he stands upright or takes on contact due to his thinner lower half. We see this come into play on this rep where Luketa tries to squeeze play down but is met by the TE and stands straight up on contact, being jolted backwards, and tossed to the ground rather than playing with hip and knee bend to work through the contact at the LOS.

Overall, Jesse Luketa is the type of player that any coach would like to have on their team. He has been lauded during his time at Penn State as a selfless, team-first player that does whatever is asked of him on the football field and leads by example. This shows up in his usage, having played multiple spots in the Nittnay Lion defense over the years and having done well in various aspects of each. Luketa’s best fit at the next level would be as a hybrid linebacker where he can rush the passer but also play off the ball in certain situations to allow him to make plays rather than try and fend off blockers that may overpower him on the edge.

When coming up of a pro comparison for Luketa, Uchenna Nwosu now with the Seattle Seahawks came to mind as a defender boasting a similar frame (6’2 1/8”, 251lb) who may be a tad more explosive with a thicker lower half but play a similar role for the defense as slightly undersized edge rushers that can play with power at the point of attack as well as show great pursuit of the football. Nwosu was known for getting his hands up and batting down passes coming out of USC, and Luketa too with seven PBUs and an INT during his tenure in Happy Valley. Both project more as tweeners that can play both off-ball and on the edge at the NFL level.

Nwosu ended up being selected in the second round of the 2018 NFL Draft, and while I think that may be a bit rich for Luketa given his lack of overall pass rush production, I do see his versatile skill set coupled with his football character being a catalyst for teams to want to get him on their respective squads. The Pittsburgh Steelers could use edge rush help, and just recently signed another hybrid defender in Genard Avery ho plays a similar game to Luketa. Given the presence of ILB Coach Jerry Olsavsky and Defensive Assistant Brian Flores at the Penn State Pro Day, Luketa could be a name in consideration for Pittsburgh in the middle rounds of the draft.