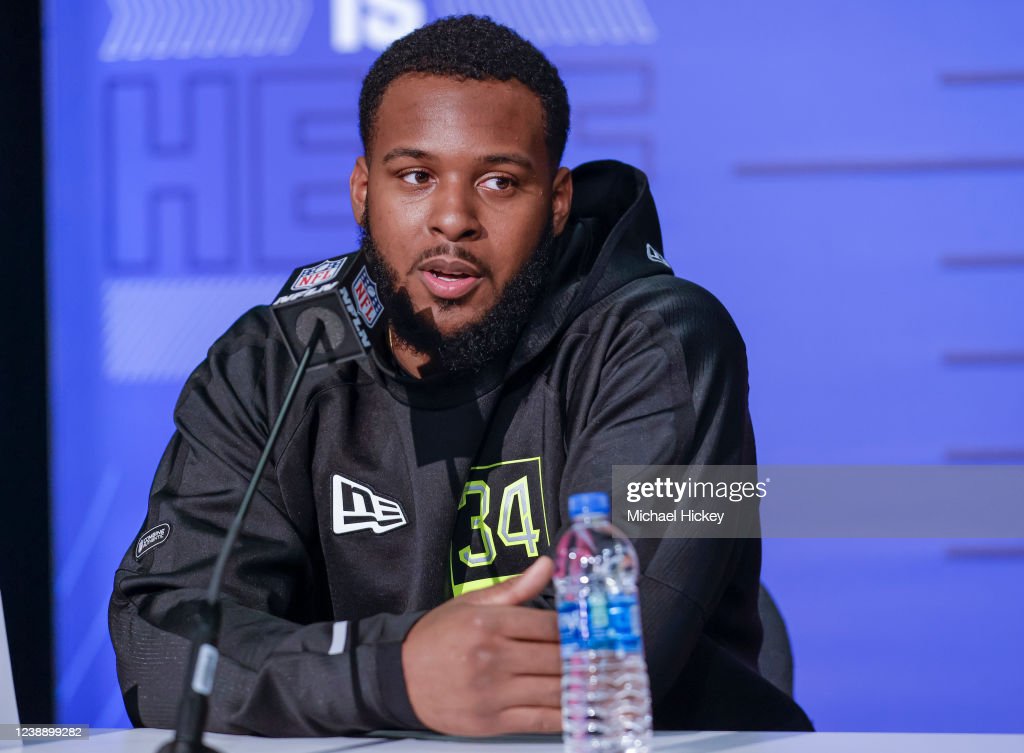 From now until the 2022 NFL Draft takes place, we hope to scout and create profiles for as many prospects as possible, examining their strengths, weaknesses, and what they can bring to an NFL franchise. These players could be potential top 10 picks, all the way down to Day 3 selections and priority undrafted free agents. Today, I’ll be profiling Ohio State OG Thayer Munford.

— Great size and rare length/wingspan, looks the part and carries his weight well
— Solid run blocker able to uncoil his hips and run his feet, has strength and drive to displace defenders on base blocks
— Heavy hands and effective strike, hands pack a punch
— Displays good grip strength to lock onto blocks when he keeps his hands inside
— Able to stall out bull rushes by interior rushers
— Shows aggressive pass set to set flat and not give ground on the snap
— Versatile player with experience at guard and tackle
— Played against quality competition
— Appears to be a good team leader

— Too slow out of his stance at guard and tackle, needs to be more explosive
— Doesn’t get proper depth or width in his kickslide as a tackle
— Lumbers in space and not a good athlete on tape or in testing, struggles to hit target when climbing to the second level and easily falls off block
— Struggles with speed rushers, has good size and length but lacks quickness to consistently prevent pass rushers from cornering
— Unlikely to stick at tackle and could only be used there in emergency situations, limiting true versatility
— Struggled against high-end pass rushers
— Has some trouble mirroring against quicker/finesse players
— Needs to show better knee bend with aggressive sets, gets too upright and can get pushed backwards, lacks good strategy to stall it out (like a hop step) when he gets in trouble beyond pure strength

— 45 career starts for Buckeyes, logging time at tackle and guard
— First-team All Big-Ten in 2020 and 2020 (coaches and media)
— Named one of six team captains for 2021 season
— Named 2021 semifinalist for Lombardi Award, given to NCAA’s top lineman or linebacker
— Three-star recruit from Massillon, Ohio, chose Ohio State over Alabama, Illinois, Michigan State, Penn State, and others (19 offers)
— On track and field team in high school (shot put)
— Became first member of his family to earn a college degree
— Awarded “Block 0” jersey for season (could not wear #0 and had special patch recognizing him instead), given to school’s top player on and off field, a tradition that began in 2020

Thayer Munford has one of the most impressive resumes of anyone in this year’s draft. 45 career starts, a two-time All-conference selection, a team captain, decorated and well-liked player on campus, Munford certainly has the look of a NFL lineman with his frame and elite length.

On tape, Munford is an impressive run blocker who pushes his weight around and is able to drive first-level defenders off the ball. He regularly unlocked his hips and pushed players out of their gap, opening up lanes in the run game.

He’s the LG in the first three clips and then the LT in the final clip in the away game at Penn State.

He also displays good grip strength to lock onto blocks when he plays with good technique. He plays as big and strong just like the way he looks. Left guard in the first clip against Michigan, left tackle in the second clip against Penn State.

On paper, his versatility is also a plus and he can play guard or tackle. He played more left tackle in 2020 before kicking inside to left guard in 2021. Though there were times, like the Michigan game, where injuries forced him back out at tackle.

But, he’s a poor athlete. That’s reflected on tape and in testing. He did post an overall 6.66 RAS score, which isn’t terrible, but it was largely aided to his size and a couple of decent-enough categories, posting poor numbers in his vert (22 inches) and short shuttle (4.77). On tape, Munford is too slow off the ball and must do a better job firing out of his stance. Eyes on the LG in both of these clips.

And he has trouble hitting a moving target at the second level. It’s hard to have just “phone booth” linemen in the NFL given the need to attack speedy linebackers and the fact most teams have some element of zone runs to them. Heavier use of screen games also require linemen to play in space more often, too.

Left guard in all three clips.

He certainly had his warts against top players too like Michigan’s Aidan Hutchinson. To be fair to Munford, he had played LG for the first three quarters of the game before moving back out to tackle but it was Munford who got run over by Hutchinson this year, a clip that went viral.

Aidan Hutchinson truly deserves to win the Heisman more than the other finalists! This bull rush was SAVAGE AF! 😤🔥🔥🔥🔥🔥🔥 #Hutch4Heisman @anthonyrziolapic.twitter.com/BaWGlDWYj5

Overall, Munford is a plus run blocker in confined spaces. He’s strong and seems to be extremely high-character. But his athletic limitations are an issue and will be tough to scheme around. I think he’s similar to James Carpenter. Which isn’t the worst comp in the world, Carpenter is a 120+ game starter, but he never became the dominant guard he was billed to be. But I think even Carpenter is on the higher end of where Munford will end up. John Simpson is a more recent and perhaps accurate comp.