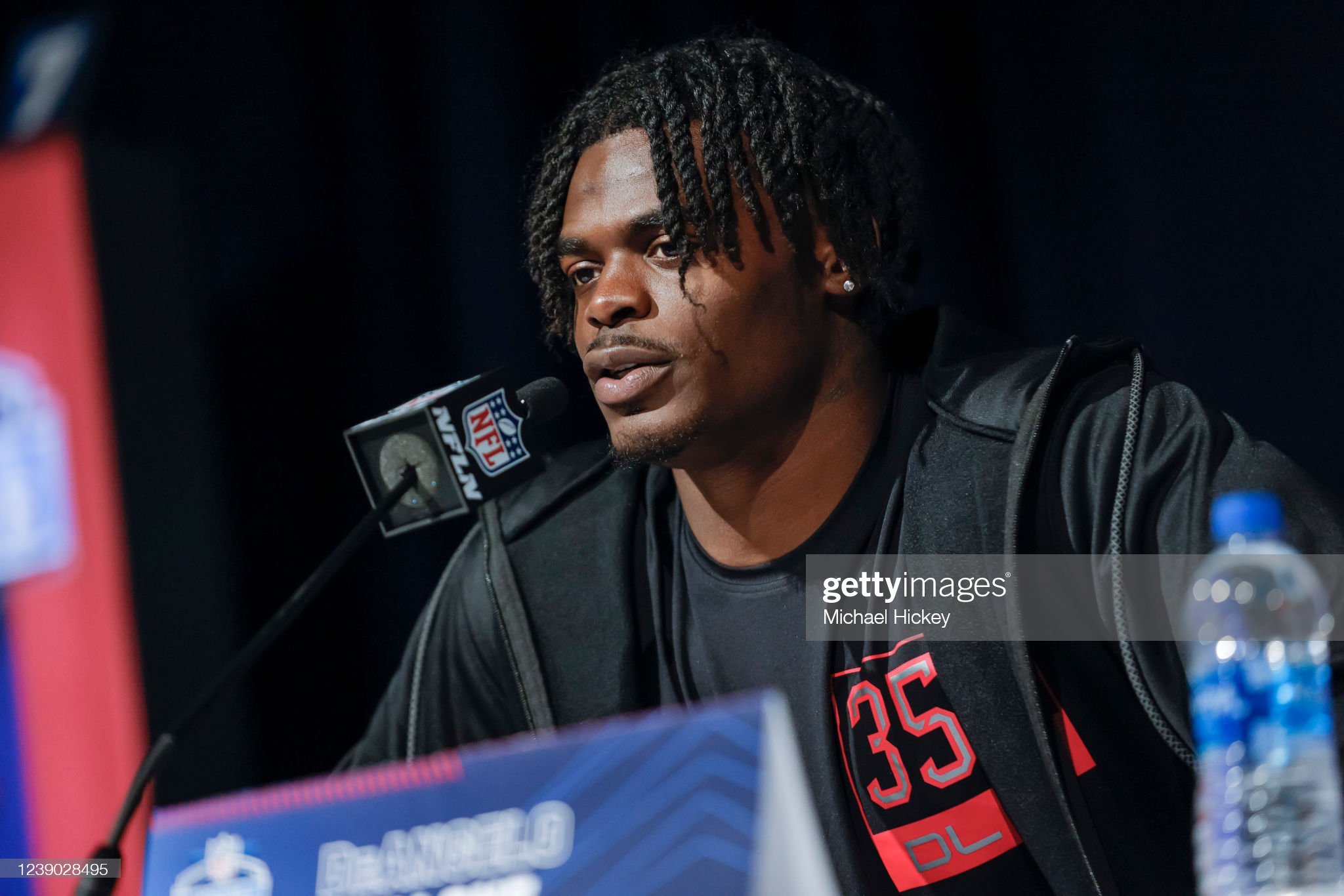 From now until the 2022 NFL Draft takes place, we hope to scout and create profiles for as many prospects as possible, examining their strengths, weaknesses, and what they can bring to an NFL franchise. These players could be potential top 10 picks, all the way down to Day 3 selections and priority undrafted free agents. Today, I’ll be profiling an edge prospect that has some impressive instances of speed and effort in his game but walks a fine line of being a tweener at the next level.

— Good athlete with a prototypical frame
— Plays with good speed and explosiveness off the edge
— Can accelerate around the corner when rushing the passer
— Plays stronger than his frame would suggest, having the ability to convert speed to power
— Attacks blocks with active hands and will battle to keep outside contain and shed blocks in the run game
— Will sit his hips down and attempt to keep outside leg and arm free to keep outside contain
— Can generate a good amount of force with his punch
— Has a fair amount of bend as a pass rusher, displaying good lean around the arc
— High-effort player that consistently provides backside pursuit of the ballcarrier against the run
— Will run down backs and QBs in the backfield when left unblocked
— Opportunistic tackler that will look to get the football out on the strip sack
— Has played in a spy role for the Hilltoppers off the ball, suggesting he could be versatile as a off-ball linebacker

— Lacks the sand in the pants to hold the point of attack against larger, powerful run blockers
— Will be dead-to-rights if he stands up in run defense, getting shocked back and thrown to the turf if he doesn’t play with good leverage
— Will allow blockers to bait him in, thus resulting in them reaching him and losing outside contain
— Can be slow to redirect in space and will lose pursuit angles to the football
— Doesn’t always utilize his hands as a pass rusher to set up the blocker
— Needs to develop a more consistent counter move inside rather than just trying to win with speed and quickness
— Seems to rely on either winning around the edge or pushing the pocket into the passer rather than executing with hand usage
— May be seen as a tweener by some teams pertaining to whether he is a better fit as a base DE/3-4 OLB or a 4-3 OLB off the ball

DeAngelo Malone initially stood out to me and the other members of the Steelers Depot crew down in Mobile for the Senior Bowl, but not for the right reasons. He looked small and slender for the EDGE position, carrying a body type more along the lines of a pumped-up WR than a pass rusher. Malone expectedly struggled initially to start the week, having trouble handling pure size and power at the point of attack against competition that exceeded what he faced on a regular basis in Conference USA.

When you pop in the tape on Malone, you see a similar trend. His lack of size and anchor can lead to him losing more often than you’d like to see against the run, being engulfed by sheer size and power like we see on this play where he gets chucked to the ground by UTSA LT Spencer Buford.

While Malone’s game is predicated on winning with speed and quickness around the edge, he doesn’t always redirect well in space, flattening the corner on his rush to finish at the ball. We see an example here from the same game as Malone wins with speed around the corner but can’t turn inside to the QB in time as the passer escapes the pocket, taking off to get to the sideline to pick up a couple of yards.

Here’s another example against the Roadrunners where Malone swipes the RT’s arm down, but over pursues up the filed, leaving the cutback lane open for the QB who scoots right past him as Malone is slow to redirect in space, completing a full turn as the passer becomes a runner as picks up first down yardage.

Still, Malone grew on me and the rest of the Depot staff during the week, showcasing that he indeed had the strength and explosiveness as a fine athlete in his own right to convert speed to power with his rush. He showcased that in a few of the live practices as well as in the exhibition game, including on this rep where he puts the TE on his back and accelerates into the backfield to smack #8 Kenny Pickett for the big sack.

Malone went viral for managing to do the same thing to nasty OT Trevor Penning from UNI during practices, and he got a second shot at him during the game which we see in this clip, landing a good punch inside Penning’s chest and proceeds to walk back the 330lb OT into the lap of #12 Carson Strong who is forced to throw the football in a hurry.

Malone has also shown to be capable of manning the edge and keeping outside contain when he plays with good leverage and sits his hips down to take on contact. Watch this rep against UTSA and his ability to keep his shoulders square to the LOS as well as keep his outside leg and arm free as he strings out the run, sheds the block, and makes the tackle for minimal gain.

While I got on Malone earlier for not always redirecting well in space or at the top of his rush, he does indeed bend well around the corner as he flattens to the passer as a pass rusher. His long, lean frame allows him to sink low to the ground, minimizing the surface area for blockers to get a hold of him as he attempts to get around the edge. He also has a knack for going after the football like we see here against Appalachian State, working the arm over technique on the RT as he turns the corner and knocks the ball out from behind on the strip sack fumble.

Here is another example of Malone forcing the ball out on the sack, but this time as a QB spy defender that drops on the snap of the football. His size and athleticism allow him to play both on the ball as a standup pass rusher as well as an off-ball linebacker, and we see the latter here as he lines up in the B-gap, drops into coverage, then pursues the passer once flushed from the pocket, closing ground quickly and violently rips the ball out.

Another aspect of Malone’s game that shouldn’t go unnoticed is his intense pursuit of the ball. Whether it be as a pass rusher or as a run defender, Malone plays with a noticeable motor in pursuit of the QB. Here are a couple of examples of Malone playing chase of the football with the first coming on a play he makes down the field on the run and the other comes on Malone chasing down the screen to the RB across the field where he goes through a blocker to make the tackle.

Overall, DeAngelo Malone comes off as a classic “tweener” looking to make that transition from the college game to the pros. He is a little light in the pants for a traditional edge defender which shows up on occasion in his run defense as well as his ability to consistently win with power at the point of attack. However, he does flash that speed to power conversion on tape and plays with the effort and speed you want to see as a pass rusher, being able to get around the edge as well as win as a blitzer from the second level of the defense. He would benefit from getting stronger and developing more hand usage to take his game to another level.

As far as pro comparisons go, Indianapolis Colts EDGE Ben Banogu came to me as a name that was eerily like Malone coming out of TCU. Both guys boast long, lean frames and are good athletes, sharing nearly identical size, length, and athletic testing scores. Banogu had more size that Malone coming out, but he too has proven to be a bit of a tweener to start his NFL career, being a core special teams player and rotational pass rusher as he works on refining his game to earn more playing time.

I personally see a similar path of development for Malone at the next level as he will be asked to contribute early on special teams which he did effectively at Western Kentucky when asked to do so while he improves his game and his body to better fit the role of a 3-4 OLB at the next level. He also could be a logical fit as a 4-3 SAM that rushes the passer like what Hassan Reddick has been asked to do in recent seasons. The Pittsburgh Steelers could use another pass rusher in the room and given the fact that Brandon Hunt was in attendance for his Pro Day, it wouldn’t come as a shock to see Malone be a likely Day Three target.