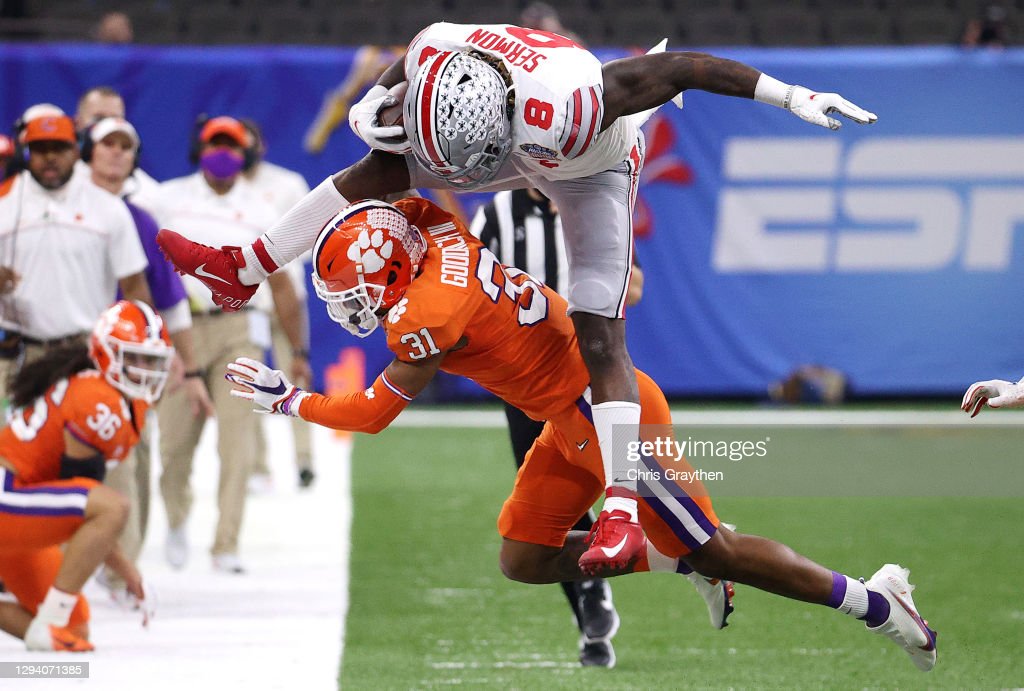 From now until the 2022 NFL Draft takes place, we hope to scout and create profiles for as many prospects as possible, examining their strengths, weaknesses, and what they can bring to an NFL franchise. These players could be potential top 10 picks, all the way down to Day 3 selections and priority undrafted free agents. Today, I’ll be profiling the other first team All-ACC corner from Clemson.

Andrew Booth gets most of the attention from the Clemson defensive backfield but Goodrich had a good season himself. He is an outside corner who played primarily on the opponent’s side of the field which I found interesting.

Against the pass, Goodrich was uses in a variety of Zone and Man coverages. While playing Press coverage, he mixes it up sometimes using a jam and sometimes not. He has a solid jam and can really stun a receiver when he times it correctly. He displays good patience and balance to not over commit to fakes and gets up to speed quickly. When playing with his back to the ball he reads the receiver well and plays through the catch point. In Zone coverage playing deep in a Cover 3 or underneath he has good awareness of receivers in his area and sets up in a good position to get into passing lanes and close on the ball. His eyes are always on the quarterback and his understanding of route combinations is good to anticipate the routes in front and behind him.

At Syracuse, in Press coverage at the bottom of the screen he makes a nice read of the WR on the back shoulder throw to get the break up.

At Syracuse, from the bottom he gets good depth in the underneath zone and extends to break up the pass.

At Pittsburgh, at the bottom he does a nice job of playing the high/low receivers and getting in the passing lane.

He reads screens well showing the quickness to avoid blockers and when he engages a blocker he does it with good hand placement to steer the play back inside. I like his aggressiveness to the ball at the catch point playing with good physicality to disrupt or knock the ball out. I only saw him blitz once but there is potential there.

At Pittsburgh, he reads the screen immediately and puts a big hit on the receiver.

Vs Iowa State, at the bottom he makes a great break on the ball to break up the slant.

Vs Iowa State he made couple of big plays. A ball gets batted into the air that he returned for a touchdown and forcing a fumble on the scrambling quarterback to seal the game.

Against the run, he is willing to get in there and take on runners. He transitions well from coverage to run defense to get to the ball quickly and is willing to take on ball carriers. When he stays low he is a very effective tackler. He does a nice job on the edge as a force player and shows good pursuit all over the field.

Vs Georgia, here are some example of his early season tackles showing the willingness and stick his nose in there.

He looks least comfortable in Off Man coverage allowing plenty of space with an adequate transition from backpedal to downhill. Following in breaking routes from Off coverage or when beat on deep routes he doesn’t have the extra gear to catch up. He can be physical when cutting off vertical routes on the intermediate level and grabby on the deep level which could lead to penalties. As a tackler he was better earlier in the year than towards the end. He was attempting to tackle too high and not getting players down. I saw him let up a couple times when attempting to tackle big tight ends.

Vs Wake Forest, at the top in Off Man he gets turned to the outside and is left chasing the WR who’s open on the post.

Vs Wake Forest, here he will come in with a chance to stop the runner. Go low he has a chance to cut him down but he goes high and gets taken into the end zone.

Vs Iowa State, at the bottom the WR beats him with and while his speed is good he doesn’t have the extra gear to catch up.

Overall, Goodrich is a cornerback who played on the outside usually to the opponent’s side of the field. He has experience in Zone and Man coverages and plays with patience and balance in Press coverage. In Zone coverage, he has a good understanding of route combinations, spacing and plays with eyes on the quarterback. Against the run, he was a good force player and a willing tackler.

Areas to improve include improving his transition in Off Man coverage, less grabby on deep routes and being wary of his physicality prior to arrival of the ball.  Cleaning up his tackling form to stay low consistently would be beneficial.

The best fit for Goodrich would be in Zone defense with Cover 2 (underneath) and Cover 3 (deep) responsibilities where he can play with his eyes on the quarterback with some Press Man coverage mixed in. I think he’ll be given the opportunity to play on the outside but if he can maintain his run defense I could see him as a good fit in the slot. I think he could be an effective blitzer off the slot as well.

The Steelers like players that can wear multiple hats and can fill multiple roles. Goodrich could compete on the outside and in the slot as well as playing special teams. I am going to comp him to Taron Johnson who has similar size and came in to the league similar traits in Zone awareness and willingness to support the run.

Games Watched: 2021:  Vs Georgia, At Syracuse, At Pittsburgh, Vs Wake Forest, Vs Iowa State