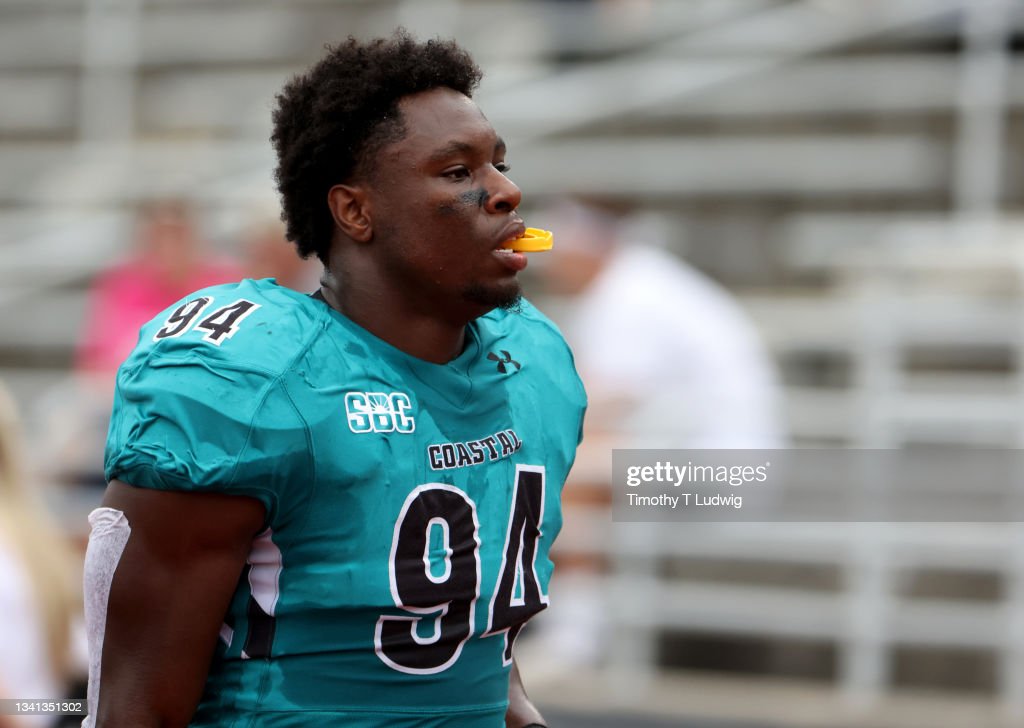 From now until the 2022 NFL Draft takes place, we hope to scout and create profiles for as many prospects as possible, examining their strengths, weaknesses, and what they can bring to an NFL franchise. These players could be potential top 10 picks, all the way down to Day 3 selections and priority undrafted free agents. Today, I’ll be profiling Coastal Carolina EDGE Jeffrey Gunter.

— Very quick off the snap
— Upper body strength evident each play
— Experience in a 3-4 Bandit role
— Looks natural in coverage – former defensive back in high school but grew overnight causing a position switch
— Long arms and wingspan allows to create first contact on many plays
— Preferred pass rush move is the Long Arm and his power holds the point of attack
— Bit of a workout warrior as he likes to keep an eye on his diet and physique
— Makes his living on 3rd down, having the 2nd most sacks (15) since 2017 among draft eligible players

— Tackling in terms of both finishing the pressure and against the run
— Not a head hunter on run plays – looks content to stay in his spot and area instead of attacking
— Pass rush moves are limited – admits himself he keeps it simple with power and only a couple of counters
— Can get flushed outside easily and neutralized on pass rush attempts
— Plays tall quite a bit against run and pass which allows blockers to win their matchup
— Doesn’t use lower body for leverage and can look very stiff at times
— Many pressures come in the form of being unblocked or clean-up pursuit, including stunts

— Three-year starter for the Chanticleers (37 official starts & 48 games played)
— Transferred to NC State after Soph. season due to family responsibilities – sat out the year because of transfer rules and then transferred back to Coastal Carolina the next year
— Career: 108 solo tackles, 106 total pressures, 21 sacks, 8 forced fumbles, 28 missed tackles
— 2021: 28 solo tackles, 34 total pressures, 6 sacks, 2 forced fumbles
— 2021 All-Sun Belt Second Team Selection
— 2020 All-Sun Belt First Team Selection
— 2018 All-Sun Belt First Team Selection
— Two-star recruit out of Riverside HS in Durham, NC with Coastal Carolina his only D1 offer
— Weighed under 200 lbs. in high school and primarily played defensive back until moving to the defensive line as an upperclassman
— Earned a bachelor’s degree in Economics in December 2020 and currently working towards a second degree in communication with aspirations of working in sports media one day

Tall and strong defines Gunter as soon as you start watching his play.  He has a ton of upper-body strength and he’s not going to get moved backwards necessarily but will get moved around laterally and away from the action.  Pass rush moves are limited as Gunter self admits in interviews, stating he likes keeping it simple with power then speed.  Gunter uses his Long Arm pass rush move on nearly every snap with limited counters.  He’s far from being the cause of a pocket collapsing on many of his pass rushes with a high number of pressures coming from cleanup or pursuit pressure.  Gunter also benefits from unblocked pressures as well, while lining-up outside the tackles on 88% of his snaps during his college career.  On plays where he’s lined-up as a 4 or 5 technique, he explodes well off the snap from his three-point & four-point stances, but a two-point stance is his norm.

He plays athletic in space and looks comfortable in coverage – perhaps due to being a converted defensive back during his high school playing days.  His tackling attempts have a laboring feel to them both in the pocket and at the line of scrimmage.

On this play, Gunter manages to win his matchup to create pressure but cannot close the deal by getting the QB tackled before a long scramble ensues.

Here is a prime example of how Gunter will use his long arm approach at the point of attack.  On this particular run play, Gunter is neutralized providing minimal impact.  This type of result tends to happen more than just one or two occasions during a game.

But there are times Gunter looks more active and uses his upper body strength to fight off a block, making a nice run stop.

Gunter will at times try something besides the long arm rush & push as he uses a speed chop to get past the blocker.  Like many reps, Gunter stays upright and gets pushed behind the action while the QB steps up and delivers a long pass downfield.

His comfort zone though is resorting to power and shows tendencies of getting hung-up on the blocker as he does here with the RT.

Gunter certainly has the frame and reach to play at the next level as a pass-rusher and there’s some critiques & techniques in which an NFL coaching staff will need to iron out.  Adding an array of secondary pass rushing moves is a must or he will most likely have a minimal impact.  His willingness to engage in more combat and violence against run plays is lacking but does offer small glimpses of run stopping abilities.  Instincts in coverage look natural as his high school playing days had him playing defensive back in his early years.  Time will tell if his role will be a pass-rusher only or if he can become a well-rounded player down the road.

Gunter’s comp comes easy as he models his game after a couple of players, namely Matthew Judon.  Judon offers similarities in the sense he plays high using a long arm approach while lining-up outside of OT’s and TE’s, and benefits quite a bit from clean-up pursuit and unblocked pressures as well – Judon actually has the most regular season unblocked pressures (57) since entering the league in 2016.  Run defense has not been Judon’s strong suit either with the 11th most missed tackles (23) among EDGE defensive players since 2016.  Both also have the Bandit type of role down in terms of natural coverage abilities.

Depot Draft Grade: 6.6 (Could land in 5th round) – Backup/Special Teamer prospect who should make roster but potential to contribute regularly on defense might be limited