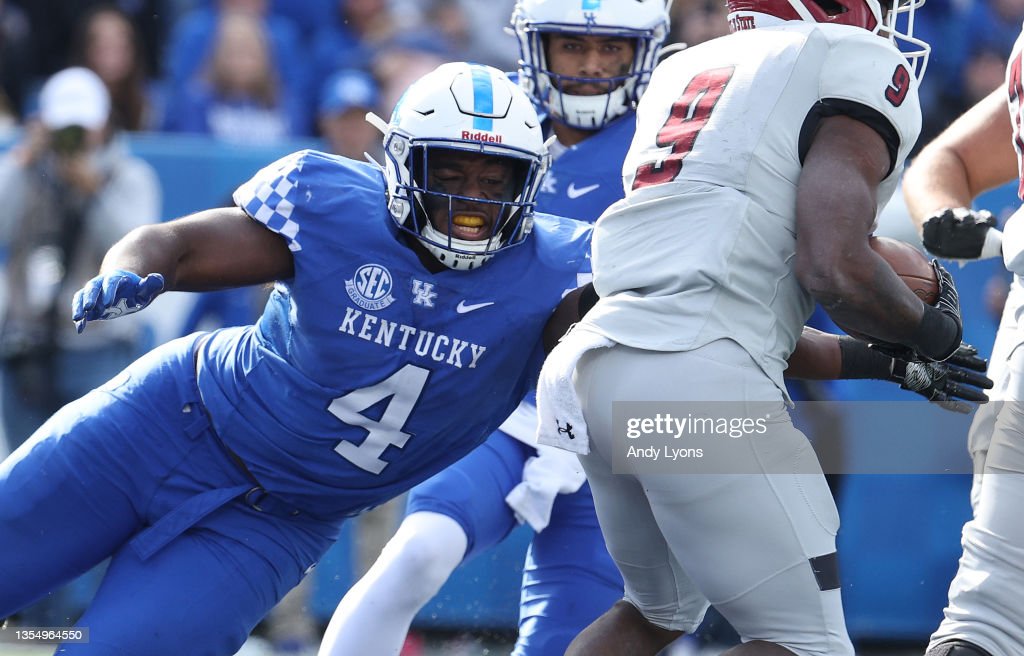 From now until the 2022 NFL Draft takes place, we hope to scout and create profiles for as many prospects as possible, examining their strengths, weaknesses, and what they can bring to an NFL franchise. These players could be potential top 10 picks, all the way down to Day 3 selections and priority undrafted free agents. Today, I’ll be profiling an edge rusher that has been moved all over the defensive front during his time with the Wildcats and has quietly become one of the most disruptive defenders in all of college football.

— Born leader who selflessly plays whatever role the team asked of him
— Overcame adversity of cancer to become one of the best defenders in Wildcats history and their only three-time team captain
— Has the build and enough length you look for at the position
— Powerful defender that fires out of his stance to shoot gaps and shock back blockers
—Plays with heavy hands and the point of attack along with an explosive, strong lower half
— Plays with good pad level when attacking the LOS, especially when kicked inside over the guard
— Versatile defender that has played up-and-down the defensive front
— Does a good job sitting his hips down and playing with a strong base in run defense
— Can fight pressure well out on the edge and hold his own to keep outside contain
— Does a good job keeping his eyes up in the backfield to be aware of what is going on
— Relentlessly pursues the ballcarrier or the passer both in pass and run situations
— Sure, tackler that loves to put his body into his prey as he takes them to the ground
— Quickness of the ball and ability to shoot gaps inside make him a viable sub package pass rusher}
— Gap penetrator that powers through double teams on occasion, forcing two blockers on him
— Can use the swim move/arm over to evade blocks as an edge rusher

— Redshirt Senior prospect from Prince George’s County, MD
— Born in Washington, D.C
— Older brother, Travaughn, was a linebacker for the Wildcats from 2011-14
— Was rated a four-star recruited and committed to Kentucky over the likes of Maryland, Oklahoma, Notre Dame, Clemson, Ohio State, and USC
— Played in all 13 games with one start as a true freshman and Totaled 17 tackles, 4.5 TFL, 3.5 sacks, 3 QBH and 1 blocked kick
— Redshirted in 2018 after he was diagnosed with melanoma in his right foot in July
— Underwent three surgeries and completed a year-long immunotherapy treatment plan for melanoma found on the bottom of his right foot, managed to see action in final three games of the season
— Started in all 13 games of 2019 and was elected a team captain where he totaled 34 tackles (20 solo), 9.5 tackles for loss, 3.5 sacks, two forced fumbles, one PBU and one blocked kick
— Played in all 11 games with ten starts as a team captain and totaled 32 tackles (16 solo), 6.5 TFL, 1.0 sacks, one QBH and one INT
— Played in 12 games and totaled 53 tackles (24 solo), 15.5 tackles for loss, 5.5 sacks, eight quarterback hurries, one forced fumble and a blocked kick
— Missed the Citrus Bowl game vs Iowa due to a leg injury
— PFF Second team All-SEC (2022), AP First team All-SEC (2021), Dean’s List (2019), SEC Academic Honor Roll (2018, 2019, 2020)
— Only three-time full-season captain in school history and has played in 52 career games with 37 starts
— Graduated in May of 2021 with a degree in family science and a minor in health promotion
— UK’s rep on the SEC’s Football Leadership Council, one of three representatives for UK football on the Student-Athlete Advisory Committee (SAAC), and frequent speaker at local churches, sharing his faith and how it helped him overcome cancer (2018-2020)

Joshua Paschal came to the Bluegrass State as a highly touted recruit who had his pick of the litter when it came to options to play college ball. However, given the fact that his older brother played for the Wildcats a decade prior, he decided to follow the family tradition and play for Kentucky. Paschal ended up becoming one of the most decorated and respected players in the program’s history earning the title as a three-time team captain who showed leadership qualities both on and off the field. None of those being greater than overcoming melanoma in his right foot in 2018, causing him to redshirt that season, but he returned to form to become an All-Conference performer.

When you pop in the tape on Paschal, you see a high-effort, versatile defender that played all over the Wildcat defensive front. He will line up as a base defensive end but can kick inside to take advantage of guards as a pass rusher with his impressive get off on the snap of the football. Here is one example from this season against Florida where Paschal shoots the right-side A-gap between the center and RG to make the big tackle for loss in the backfield.

Here is another example from later in the game where Paschal splits the double team of the LT and TE to wrap up #5 Emory Jones at the LOS for the clutch third down stop to force fourth down.

Paschal’s strong lower body and ability to play with good pad level as a defender make him extremely effective on the interior. He comes off the ball hard and low, making it difficult for offensive linemen to cut him off when he shoots a gap. This causes him to draw double teams on occasion, of which he has shown the ability to win like on this rep against Georgia where Paschal lines up outside shade of the RG and then attacks the A-gap, splitting the double team of the C and RG and gets a hand on #13 Stetson Bennett while his teammate comes around to clean up the play.

Not only does Paschal’s strength and power show up splitting double teams on the interior, but also when he is asked to hold outside contain as a run defender. Check out this rep against the bulldogs where Paschal fights pressure against #69 Jamaree Sayler and #54 Justin Shaffer who will both be selected in this year’s draft, keeping his outside leg and arm free with good pad level and manages to rip off the block as the runner gets to the corner, making the big TFL.

Paschal is one of the better run defenders in this draft class when it comes to setting an edge and maintaining outside contain responsibilities. He plays with strong, heavy hands that can shock blockers backward and then rip off to make the play to prevent the runner from getting to the outside. Here is another example against the Gators where Paschal stacks and sheds the TE at the top of the screen to get the run stop for yet another TFL.

As mentioned earlier, Paschal is quick out of his stance, having a great jump on the snap as referenced by his respectable 1.62 10-yard split at the NFL Combine. He may not possess elite speed, but his ability to penetrate and clear blocks make him a disruptive player on the defensive front. Here’s a look at another play Paschal makes against my Florida Gators and on #56 Jean Delance, getting a great jump on the snap and hits Delance with the outside swim move and make yet another tackle for loss in a game that Paschal dominated the competition.

While a skilled run defender and relentless pursuer of the ball as a pass rusher, Paschal has also made a notable impact on special teams, more notably punt and field goal block units. He has several PBUs and three blocked kicks during his tenure in Lexington including this game-changing blocked field goal attempt that his teammate returns for the score right before halftime.

Still, Paschal does carry his own warts as a draft prospect. He is a super senior since he had to redshirt due to his battle with cancer and lacks elite length and athleticism you look for in a dominate edge presence at the next level. He also isn’t a natural pass rusher coming off the edge, lacking that bend and balance you see with the great ones who can effortlessly turn the corner. This lack of flexibility and balance leads to Paschal slipping on occasion as he tries to get the corner like on this rep against Florida.

Paschal’s arm length is fair for the position, but he can have trouble handling larger blockers at times who get their hands on his torso right away and struggle to disengage. Even if he manages to get off the block, it can be a tad slow in order to make a play on the football like we see on this rep against Georgia where Paschal attacks the TE but can’t get off the block in time as the runner goes past him for a nice gain up the middle of the defense.

Paschal’s motor and effort in pursuit makes him a player you want to have on your defense, but he does need to reel it in sometimes to play more assignment sound football. Occasionally he will over pursue, leading to cutback lanes or getting faked out by play action like we see on this rep where Stetson Bennett fakes out Paschal on the PA rollout to his right, having plenty of green grass to throw a dart to his receiver breaking to the sideline.

Overall, Joshua Paschal is a high-character, high-effort playmaker that doesn’t possess elite physical tools but makes the most of the tools that he has in his toolbox. He is a stout run defender that can set the edge and cause havoc as a gap penetrator as well as a sub package interior pass rusher. He needs to work on his overall hand usage to win on the outside more as a pass rusher, as his best fit will likely come as a 4-3 base DE or as possibly a 3-4 edge-setting OLB at the next level.

When studying Paschal’s tape, Shaq Lawson came to mind as a similar player coming out of Clemson that wasn’t incredibly twitchy as a pass rusher but was extremely disruptive as a great run defender that won with strength and power at the point of attack as well as with a relentless motor. Lawson shares near identical size as Paschal (6’2 5/8”, 269lb, 32 3/4” arm) as well as athleticism (4.70 40, 1.63 10). Lawson was drafted in the first round back in 2016, and while he may not have lived up to the billing as a pass rush specialist he has been as steady presence as a run defender as a disruptive force upfront which is what I foresee Paschal being at the next level.

Paschal told me in Indianapolis that he met with the Pittsburgh Steelers at the NFL Combine during my interviews with players and Pro Scouting Coordinator Brandon Hunt was in attendance for Kentucky’s Pro Day April 1st, so Pittsburgh could be interested in a player like Paschal who could fill a need as a #3 EDGE defender that specializes in stopping the run which is something the Steelers look to make a priority after last season. Given his leadership, character, and perceived interest in a position of need, look for Paschal to potentially be a name to watch as a name Pittsburgh could select likely somewhere on Day Two of the 2022 NFL Draft.