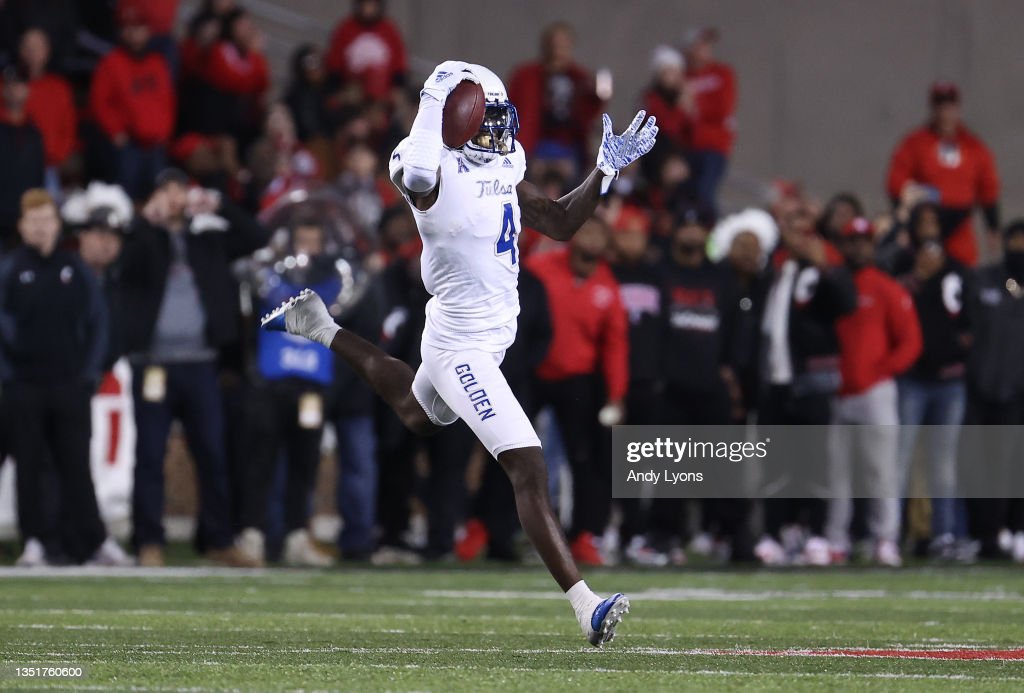 From now until the 2022 NFL Draft takes place, we hope to scout and create profiles for as many prospects as possible, examining their strengths, weaknesses, and what they can bring to an NFL franchise. These players could be potential top 10 picks, all the way down to Day 3 selections and priority undrafted free agents. Today, I’ll be profiling Tulsa WR Josh Johnson.

Johnson will most likely strike many who watch him as a polished route runner with nervous hands.  Johnson looks most comfortable making body catches and when the pass forces him to reach outside of his frame, there’s no guarantee that he’s going to haul it in.  Even with the contested catches, it becomes more a juggling routine to secure it.  The sudden bursts and quickness will get him open in space and after the catch it feels like he’s leaving too much meat on the bone in the form of not breaking or forcing missed tackles.

Speed up the seam gets past the defense on many occasions.  Jump balls downfield are an adventure as he simply doesn’t look comfortable trying to high-point the ball or catching away from his body.  Hitch routes are very frequent along with Out routes and intermediate Crossing routes. Overall, the drops are glaring.

Here’s one example of where Johnson leaves his feet to attempt a catch above his head near the goal line but goes through the hands.

Here, Johnson attempts to make a clean hands catch on target but it slips through once again.

There’s an obvious comfort level with allowing the ball to get into the chest as Johnson will make it look smooth on these types of catches.  What’s also on display with this reception against Ohio State is the yards after the catch, which he can leave you wanting more of in many instances.

Make no mistake, Johnson has moves to get separation, much like he shows here against South Florida.

The one part of Johnson’s game you can also appreciate is there’s not many routes and receptions near the line of scrimmage.  The targets come downfield and past the sticks.  But, he has the clear ability to make the big play on the short route.  Johnson motions across and leaves the defensive back guessing, resulting in YAC and a TD.

There’s little doubt Johnson can get open and the question will be can he improve on the drops.  Learning to haul in passes with his hands instead of body and developing a larger catch radius is a must if the dreams and aspirations of playing in the NFL are true.  Speed and quickness will earn him some looks most likely for the next level and there’s a chance he could hear his name called during the draft.  Seems like he’s someone you could easily root for as there’s not a ton of flashiness in his game and demeanor.  In-breaking routes against press coverage can give him issues and appears focus is not there to make the catch.  In an interview with Bo Marchionte, Johnson mentions he’s always looking at the feet of the defender in press coverage and guessing how they’re going to play him.  Perhaps this is the big reason why there’s so many drops with 20 out of 27 career drops in college took place when the defense is in a press coverage look.  If this is indeed a distraction or mental issue that a position coach helps him to improve, Johnson could find himself on a roster in some capacity.

The way Johnson plays reminds me a bit of Donnie Avery out of the University of Houston.  Avery college highlights are standard definition for the most part but there’s the same type of body catches Johnson has a habit of making.  Despite size and stature, Avery was an intermediate and downfield threat as well. Avery was able to find some success in the NFL for a couple of seasons after being drafted high in the 2008 draft by the then St. Louis Rams.  Most notably his one successful season in 2012 playing with Andrew Luck in Indianapolis when he hauled in 62 receptions for 793 yards for the regular and postseason combined.  The one glaring stat that season though was 14 drops.  A high drop rate simply followed Avery wherever he went until his playing days were over after the 2014 season.

Depot Draft Grade: 6.0 (Chance of being a 7th round draft pick but most likely an UDFA) – Someone with an outside shot of making a practice squad out of training camp if signed.