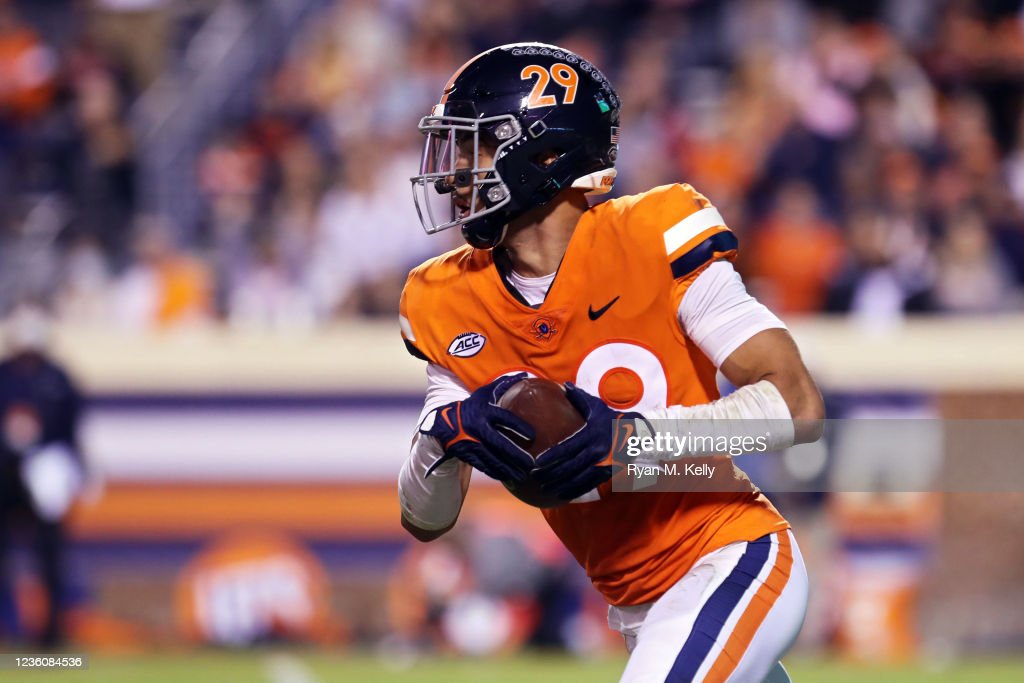 From now until the 2022 NFL Draft takes place, we hope to scout and create profiles for as many prospects as possible, examining their strengths, weaknesses, and what they can bring to an NFL franchise. These players could be potential top 10 picks, all the way down to Day 3 selections and priority undrafted free agents. Today, I’ll be profiling Virginia safety Joey Blount.

*All numbers from Pro Day workout

— Height/weight/speed player with great overall testing (9.61 RAS score)
— Physical, impactful hitter with aggressive playstyle, desire to hit people and fills alley well against the run, ballcarriers feel it when he hits them
— Good motor and effort, plays with edge and shows fiery attitude on the field
— Plays run well, willing to sacrifice his body
— Effective tackler who doesn’t allow YAC, gets guys on the ground, shows ability to come to balance
—  Quick trigger to read and react downhill, explosive out of his break
— Fluid hips and smooth turn, may play a little high, but able to change directions in coverage
— Plays to timed speed and able to open it up and run
— Shows good ball skills and locates the ball well in the air
—  Versatile, played all over the defense (deep middle, deep half, slot, box, rover – team called it SABRE, essentially their strong safety)
— Also used as a blitzer, effective with good timing and finish
— Team leader, referred to as their QB of the defense, secondary fell apart without him in 2020, makes players around him better and more confident
— Experience in man and zone coverage, looks comfortable in either
— Productive career, well-rounded on the box score
— Lots of starting experience
— NFL bloodlines

— Dealt with injuries throughout career and struggled to consistently stay on the field
— Physical nature and style makes him more prone to injuries
— Older than typical prospect, super senior who returned to school in 2021
— Aiming point as a tackler could be a little higher, prefers to shoot low and cut out legs
— Slightly stiff-hipped and shows some tightness trying to change directions and make small movements when at full-speed
— Not an elite cover player, does it more like an athletic safety

— 33 career starts for the Cavs
— Career: 303 tackles (19.5 TFL) 9 INTs, 5.5 sacks 3 FFs
— 2021: 86 tackles (5 TFL) 3 INTs, 1 sack
— Had ankle surgery late in 2018, out for six months but returned for start of 2019 season
— Missed five games in 2020 due to undisclosed injury
— Battled injuries in 2021 and routinely missed time during games due to nicks, did not finish win over North Carolina (collarbone injury) and Miami (FL) game (unknown reason)
— 5th year super-senior who opted to return to school for 2021 season
— Two-star recruit out of high school, only two offers were from Elon and Virginia
— 175 pounds coming out of high school
— Played QB and DB in high school, 16 total TDs senior year (7 throwing, 9 rushing) with five INTs
— WR junior year of HS, caught 30 passes
— Also played baseball and soccer
— Father is Tony Blount, former Virginia DB who was drafted in the 5th round by the New York Giants in 1990

Joey Blount was a name semi-on my radar after his “wow” Pro Day workout, putting up great numbers across the board. When the Steelers brought him in for a pre-draft visit, we certainly had to take a deeper look. And dang, his tape is strong.

Blount has a great blend of athleticism, hit power, tackling, coverage, all the things you look for. Blount will be best known for his physical, hitting nature. He has a quick-trigger and wants to fly in downfield and does a nice job policing the alley. I like his fiery attitude too. He’s a good tone-setter for a defense.

Blount also can cover. Love this clip against Georgia Tech. Post safety. Get depth, read the QB, flip your hips, drive on the ball, and finish. A+ play in centerfield.

He also picked off Kenny Pickett earlier this year. Disguises his Cover 2 assignment pre-snap and drops to the deep-half on the snap. Pickett throws it right at him and Blount finishes.

Intangibles are strong too. He’s a good IQ player and leader of the defense. The Cavs missed him when he missed half the year in 2020, allowing 38+ points in three of their next four games he missed. That year, they finished nearly dead last in pass defense. Head coach Bronco Mendenhall once spoke to what Blount meant to the defense earlier in 2020 prior to the injury.

The negatives felt scarce. He’s a bigger guy so there’s a little bit of tightness coming downhill, like this miss.

But watching the tape, I was wondering how this guy could possibly be projected as an undrafted player. His tape is great and there aren’t glaring weaknesses in his game that’d take him out of the draft pool. And it’s criminal he wasn’t a Combine invite – he should’ve been.

The number one thing that seems to be working against him is his lengthy injury history. I’m not sure what injury knocked him out for half of the 2020 season but he missed a good chunk of time there. He missed the last two games of 2018 due to ankle surgery and he missed parts of time in 2021 as well. His physical, aggressive nature won’t lend itself to protecting his body in the NFL but that’s the style he plays and makes him worth having on a NFL roster. But there will be medical concerns and the lack of Combine checks/re-checks isn’t ideal for Blount as teams do their homework.

But watch the tape and forget the injury history for a second and Blount is an excellent prospect. He’s checking all the right boxes and should at least make an immediate special teams impact given his effort, speed, tenacity, and tackling ability. But his ceiling is someone who can be much more than that. I like him as a box safety who can cover over slot too, blitzing off the edge and filling the C gap against the run. Of course, he’ll need to be healthy and available to do that. And it’s the one trait he’s missing.

Virginia has produced some impressive, athletic safeties in recent years and Blount will probably draw some comparisons to former 2nd round pick Juan Thornhill. Thornhill was a bit more of a natural cover player closer to a corner than Blount. A NFL comp for Blount is difficult but he’s a slightly more athletic version of Chuck Clark with some Taylor Rapp in his game as well.