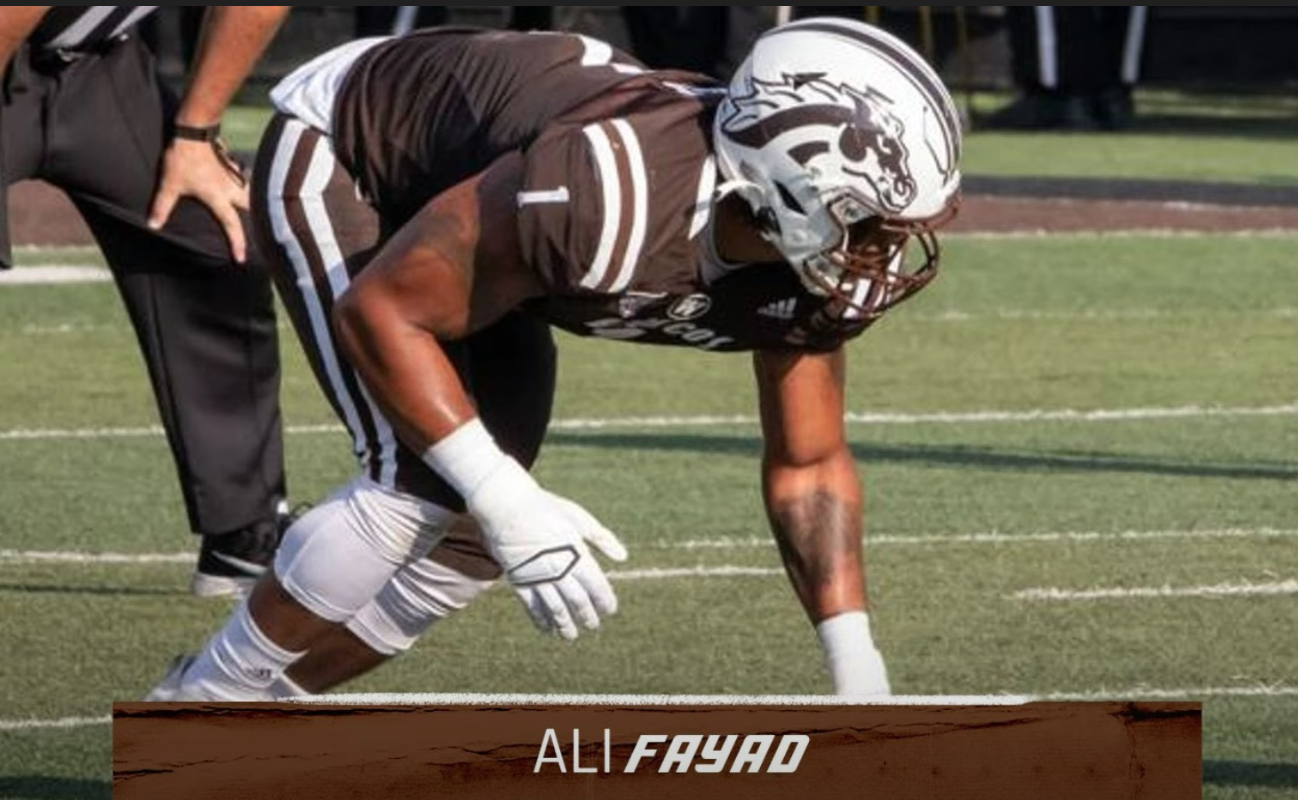 From now until the 2022 NFL Draft takes place, we hope to scout and create profiles for as many prospects as possible, examining their strengths, weaknesses, and what they can bring to an NFL franchise. These players could be potential top 10 picks, all the way down to Day 3 selections and priority undrafted free agents. Today, I’ll be profiling an edge rusher that earned all-conference honors thanks to his heavy sack and TFL production as a pass rusher, yet surprisingly didn’t receive an invite to the NFL Combine.

— Accomplished pass rusher and reigning MAC Defensive Player of the Year
— Plays with consistent effort as a run defender, fighting hard to set the edge
— Has a fair amount of power in his punch with his hands
— Knows how to create natural leverage with his hip bend and has the stoutness to set the edge against tight ends
— Productive pass rusher that utilizes a well-versed spin move to win inside across blockers’ faces
— Will use speed to get tackles to overset, allowing to counter back inside with the spin or another counter
— Will provide effort into the second and third stages of his rush when initial pass rush move fails
— Well-utilized on twists and stunts to attack pass protection with games upfront
— Has a knack for knocking the ball out with eight career forced fumbles
— Plays with a motor, displaying consistent pursuit of the football
— Has instinctual awareness to play assignment football based on his play experience

— Lacks the ideal length and size you like to have in an edge rusher
— Doesn’t possess great open field speed and acceleration for the position
— Inconsistent get off that can be slow at times, playing with more build up speed as a rusher
— Change of direction ability in the open field isn’t the best, lacking twitchy lateral movement skills
— Needs to develop more hand usage as a pass rusher as well as a run defender to get blockers off his frame
— Can get engulfed by size at times when playing as a run defender due to lack of length and size

— Redshirt Senior prospect from Dearborn, MI
— Born May 12, 1999 (age 22)
— Not ranked as a recruit coming out of high school, but was an Associated Press All-State team member as a senior
— Played in all 12 games and made three starts as a true freshman and totaled 20 tackles, 5.5 TFL, 2.5 sacks and one fumble recovery in 403 snaps played
— Played in all 13 games and started the final 12 as a sophomore and finished with 34 tackles, 12.0 TFL, 7.5 sacks, four forced fumbles, one fumble recovery, and seven QB pressures in 583 snaps played
— Started all 13 games and totaled 53 tackles, 15.0 TFL, 6.5 sacks, four forced fumbles, one fumble recovery, one PBU and nine QB pressures in 2019 on 663 snaps
— Played in four of six games during the pandemic-shortened season in 2020 where he totaled 17 tackles, including six for loss, four sacks, two QB hurries, and a forced fumble
— Went back for a final year of eligibility in 2021 and won the MAC Defensive Player of the Year Award while he totaled 39 total tackles (27 solo), 17.5 TFLs, 13 sacks, two forced fumbles, a fumble recovery, and a PBU
— First team All-MAC (2021), Second team All-MAC (2020)
— Majoring in recreation: sport management

Ali Fayad is a small-school pass rusher that has fallen through the cracks during this draft process in terms of garnering national headlines. Being lightly recruited out of high school, Fayad ended up going to Western Michigan where he saw play time quickly as a skilled pass rusher. His play improved every season, leading to a stellar 2021 campaign where he amassed 13 sacks and 17.5 TFLs.

When you watch Fayad, you see a slightly undersized (6’2, 248lb) but skilled pass rusher that can beat you many ways. To this point, Fayad’s signature moves is the inside spin where you see the upper body strength to bring his outside arm through contact to clear the line of scrimmage along with the balance to stay on the path and pursue the quarterback when he uses it. Fayad rocked the spin on multiple occasions at the Shrine Bowl in Las Vegas like on this rep where he clears the OT with arms and legs synced up in a fluid motion.

Fayad also can win by getting the edge, putting OTs in a bind that must block him due to the fact that he will either try and bend the corner if they don’t set the depth of the pocket, but also can counter back inside with the spin if they try to overset him. Here is one example of Fayad winning around the corner as a pass rusher, getting a jump on the snap with the RT being slow to pick him up, quickly getting into the pocket and gets the strip sack on the QB.

Despite being undersized and having shorter arms for the position, Fayad does a good job playing with leverage as a rusher and gets underneath larger offensive tackles. He plays with a fair amount of power in his punch and can knock back blockers, collapsing the pocket when he gets first contact to get pressure on the passer. He is a good example of this with Fayad rushing on the LT, sticking his hand under his breastplate and runs him into the pocket when he again gets the strip sack (eight career forced fumbles) that the defense ends up recovering.

Here is a play where we see Fayad put together various aspects as a pass rusher together as he times the snap off the ball well, getting the LT of Pitt to open up as he hurries to pick him up. Fayad manages to decelerate and rip the tackle down to the ground, pulling his shoulders down as he counters back inside. Alas, #8 Kenny Pickett gets rid of the football before Fayad can get home, hitting an open receiver for the TD.

Here is another example from the same game where Fayad is slow to get off the ball once it is snapped, tentatively attacking the RT with a long arm and starts to walk him back until he spins back inside on the counter. Again, Pickett throws the pass before Fayad can get home for the score. Should Fayad have a better, more consistent get off, he may be about to get the pressure to impact the pass.

Fayad’s attacking style as a pass rusher suits a penetrating scheme where the defensive line uses various twists and stunts to confuse offensive fronts and get defenders free rushing lanes to the QB. On this rep against Central Michigan, Fayad loops around from the LE position and engages the center, using his spin move to get off the block to bring down the passer attempting to escape the pocket.

Fayad also has been utilized as a spy of the QB on occasion, sitting back after the ball is snapped to observe and keep him in the pocket, but will trigger downhill when he gets the green light. We see exactly that on this play as Pickett starts to rollout to his right as the interior pressure flushes him out, allowing Fayad to blow past the RT and bring down Pickett in the backfield for a big loss of yards.

For being an accomplished pass rusher, Fayad also is a willing and capable run defender. He plays with plenty of effort to take on blocks and use his strong punch and hands to rip off blocks to make plays. Here is one example against Michigan where Fayad catches the TE lunging forward and sheds the block, crashing down through the trash to wrap up #25 Hassan Haskins for a modest gain.

Still, Fayad’s lack of size and elite physical tools do show up when he is asked to take on size in run defense or when he attempts to stack and shed blockers. He lacks ideal length and can have a hard time working off blocks like on this play where he manages to get penetration into the backfield but can’t rip off the block or grab Haskins as he reaches out for him, getting taken down to the ground as the runner breaks one tackle and takes off to the end zone for the score.

Overall, Ali Fayad is a tough evaluation since he is a skilled pass rusher with multiple tools in the toolbox to win which is evidenced given his production at Western Michigan. He plays with a fair amount of strength when he takes on blocks and is a high-effort player that will pursue the football against the run or continue his pass rush when the initial move fails. However, Fayad does lack those measurables to be a dominant force on the edge at the next level, not having the size and length to consistently hold his own at the point of attack nor the high-end athleticism to win around the corner or chase down ballcarriers in the open field.

Fayad has said in an interview with Steelers Depot’s Devin Jackson that he studies Dwight Freeney and Robert Mathis as undersized, yet skilled pass rushers that have a lot of similar pass rush tools, including Freeney’s spin move, to get after the QB. While Mathis could be a comparison for Fayad due to the size, small-school ties, and ability to win as a pass rusher, a fairer comparison at this Juncture for Fayad would be Charles Harris of the Detroit Lions. Harris was a first round pick out of Missouri that was also undersized (6’2 3/4”, 252lb), but also was a skilled pass rusher that also relied on a wicked spin move to beat tackles in his pursuit of the QB.

Harris hasn’t panned out to his draft slotting, but he has become a good depth piece and situational pass rusher in the league which is a path Fayad could carve out for himself. The Steelers have shown a willingness to draft small-school pass rushers including Alex Highsmith and Keion Adams who also came out of Western Michigan that are considered a tad undersized but are able to get after the passer. Fayad could be a good fit in Pittsburgh where he can play in a 3-4 scheme and give him that 7-9tech outside linebacker role really let him thrive and create havoc off the edge. He will have to make his way on special teams, but he could develop into nice depth at OLB.