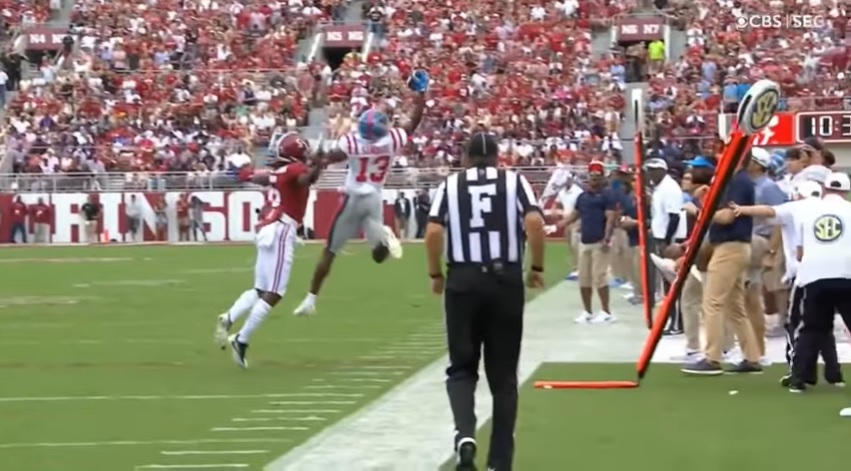 From now until the 2022 NFL Draft takes place, we hope to scout and create profiles for as many prospects as possible, examining their strengths, weaknesses, and what they can bring to an NFL franchise. These players could be potential top 10 picks, all the way down to Day 3 selections and priority undrafted free agents. Today, I’ll be profiling Ole Miss WR Braylon Sanders.

— Classic vertical threat who did almost all his damage deep downfield, true homerun threat able to make field-flipping plays
— Tracks ball well in the air, able to maintain speed as he looks over his shoulder
— Shows great ability to adjust and find the ball in the air, makes difficult grabs downfield, plus body control and finish
— Big hands (ten inches) helps him make those tough receptions
— Fights through contact well off the line, downfield on his release, and at the catch point
— Displays passable effort as a blocker
— Capable of putting up gaudy single-game numbers, came up large in offensive shootouts

— Good but does not have blazing speed (4.48 40) and lacks great length (31 1/2 inch arms)
— Not particularly springy, adjusts to ball well but rarely went overtop of defender for football
— Did not run diverse route tree, outside receiver who can gos, 15-yard digs, and glance routes
— Lacks nuance and polish at top of his break
— Will lose focus on underneath passes and drop them
— Needs to show more effort and consistent release on non-vertical routes and plays where he doesn’t think he’ll get the ball
— Offensive system helped produce big plays with double-moves
— True feast/famine player who often only impacted game for 1-3 plays a game
— Lacks much return value
— Only used as an outside receiver

WR Braylon Sanders is equally exciting and boring to watch. Exciting because few receivers in football caught the long ball like he did, averaging over 21 yards per catch in his career with big touchdown after big touchdown. But you could watch three quarters of a game and barely even see the guy.

When Sanders won, he won deep. He does a nice job tracking the ball in the air while maintaining his speed, making him even faster than that good – but not great – 4.48 40 time.

He also does a tremendous job being able to track and adjust to the ball in the air, particularly on backshoulder throws. Check out this sensational grab against Alabama, one of the best you’ll see. And you can see him rotate his body and finish the play in the end zone in the second clip.

As we noted in the bio, when Sanders found the end zone, the rest of the offense followed. Here are the point totals the Rebels put up in games in which he scored: 54, 31, 48, 54, 61, 52, and 7. The seven outlier came in the bowl game against Baylor when Matt Corral left with injury and he still caught a 37 yard TD from the backup, the offense’s only points of the day. He didn’t just do that against non-Power 5 either. Six of his ten TDs came against the SEC and he posted a 21.5 yard average against the conference.

The negatives are harder to show, though he’ll lose focus on some of the underneath stuff. Drops this glance route on third down. A little high but entirely catchable.

Sanders was also a very niche player in college. Four years of serious playing time and he only caught 65 passes over that span, an average of just 16 per year. That’s hardly enough to even evaluate. His route tree was highly limited to go-balls, 15-yard digs, and slant/glance routes. He shows effort as a blocker but running underneath, his didn’t run his routes as hard as he should’ve. Perhaps some of that was done intentionally to keep him fresh and setup double-moves but he’ll have to add more to his game at the next level.

To steal Mike Tomlin’s phrase, Sanders is a true one-trick pony. A fast receiver who knows how to win deep, he doesn’t have true track speed most vertical threats with his numbers put up. But Sanders also has more size than the typical 20+ YPC guy with good body control and when he looks the ball in, a solid and big pair of hands. It’s still hard to bank on him being anything more in the NFL than what he was in college, a situation Z-receiver deep threat, but he does his trick well.

An easy comparison to make but re-reading over my scouting report on him from several years ago, it mirrors Darius Slayton’s almost perfectly. I don’t think Sanders is quite as athletic but that’s where I consider his ceiling to be.