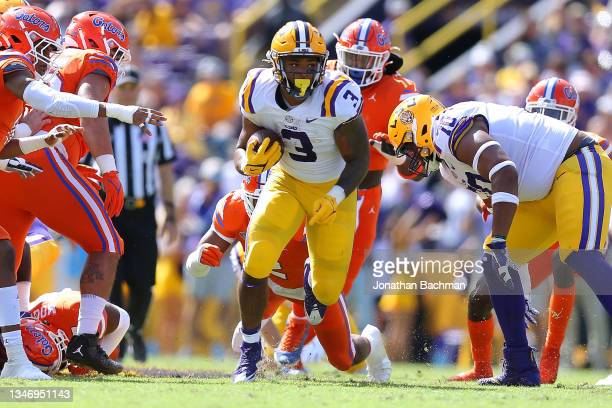 From now until the 2022 NFL Draft takes place, we hope to scout and create profiles for as many prospects as possible, examining their strengths, weaknesses, and what they can bring to an NFL franchise. These players could be potential top 10 picks, all the way down to Day 3 selections and priority undrafted free agents. Today, I’ll be profiling LSU RB Ty Davis-Price.

— Great size and bulk, fills out frame but carries weight well
— Downhill runner who dishes out powerful blows, punishes DBs and seeks out contact
— Size and style to run through defenders, displays great leg churn to generate extra YAC
— Tough, old-school run demeanor
— Displays solid burst and speed for his frame, shows second gear as he accelerates through the hole and able to run away from linebackers
— Has surprising lateral quickness and light feet to pick his way through the hole
— Shows vision and patience in gap schemes
— Size and stamina to handle the workload
— Plays with energy and wanted the ball in key moments
— Nose for the marker/end zone, successful in short-yardage situations
— Broke out in 2021
— Appears to be willing pass protector who helps on chip blocks

— Limited lens into his all-around game, used largely as a pure runner
— Minimal use in pass game and lacks any semblance of a route tree
— Didn’t get many 1v1 pass pro opportunities
— Must improve ball security at end of runs and maintain multiple points of contact on body, lacks feel for defenders around him when he’s in the second-level
— Good speed but lacks true home run ability
— Didn’t have overall gaudy production

Ty Davis-Price has big-back size and big-back power but also shows little-back burst and overall quickness. Despite that unique quality, he still has the mindset of someone who runs through and not around. He delivers punishing plays to defenders and seeks out contact. The type of guy DBs will hate to tackle. Watch some of these body blows.

He also shows great leg drive to churn through contact and get as much YAC as he can. He can turn a three-yard run into a pickup of six.

But what’s most interesting is that he isn’t a plodder. TDP shows burst and speed through the hole and ability to run away from defenders at the second level. He doesn’t have true long speed but his impressive 4.48 40 time matches his tape. Not just a workout number.

Also, not that it matters much, but the guy averaged almost 14 YPC his senior year of high school? I tried but couldn’t find his final year’s stat line but that’s insane, even for four-star recruit levels.

The downside involves some relative unknowns in the pass game. Pass protection and pass catching. Just 28 career receptions and wasn’t involved much there. He was a runner. The few clips I saw showed him pluck the ball well in the flat but what he did at his LSU workout is important because there isn’t much tape on his hands. He also showed ball security issues, fumbling at the end of these two decent runs this year.

Overall, Davis-Price is well put together who runs extremely violent with better burst and speed than you’d expect. He needs to take care of the ball better and show he can offer something in the passing game. But he’s an extremely underrated name in this year’s class and someone who fits the Steelers’ overall ideals. My comp is a little old-school and perhaps a touch strong but going with Laurence Maroney.