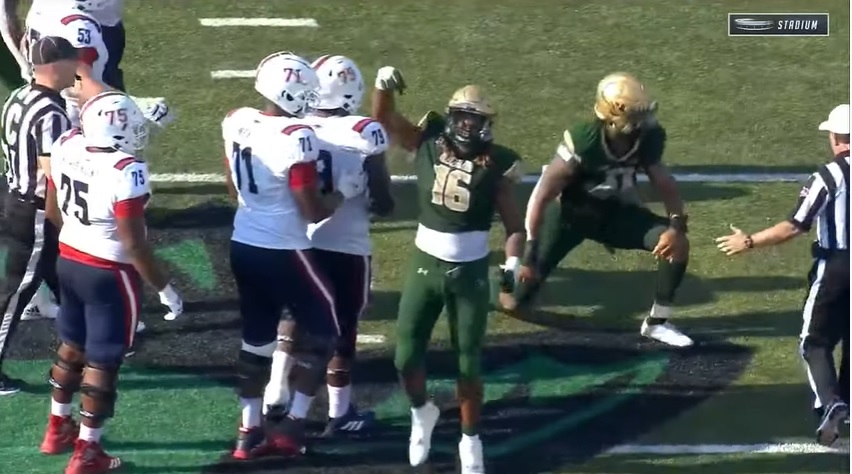 From now until the 2022 NFL Draft takes place, we hope to scout and create profiles for as many prospects as possible, examining their strengths, weaknesses, and what they can bring to an NFL franchise. These players could be potential top 10 picks, all the way down to Day 3 selections and priority undrafted free agents. Today, I’ll be profiling UAB EDGE Alex Wright.

— Intriguing size and great length, shows bulk in upper half and upper legs
— Uses length well, powerful strike and able to create space between him and blocker, shows better strike standing up than hand-down
— Keeps vision on the ball and able to work off blocks with good hand use
— Versatile, experience on both ends of the line and time with his hand up and in the ground
— Good effort and chases the ball hard, solid motor
— Attacks the ball pressuring the QB and able to use reach to knock the ball out
— Flashes good get-off off the line
— Shows variety of moves in pass rush arsenal (speed, bull, swim, cross chop), inside swim is best move
— Length able to get in passing lanes and bat down passes
— Appears to be high character and gives back to community

— Skinnier lower half, thinner ankles
— Shows flaws out of two and three-point stance
— Doesn’t put enough weight in the ground in three-point stance and struggles with pad level, pops up and plays too high
— Shows inconsistent get-off playing with his hand up
— Struggles to bend and turn the corner and too easily steered upfield, lacks ankle flexibility
— Gets knocked around by blockers in run game, even tight ends, and inconsistent taking on blocks due to height
— Lacks elite pass rush move and better off collapsing the pocket with size/length, stalls out when initial rush fails
— Little to no experience dropping into coverage, profile makes him scheme-limited
— Unlikely to have much special teams value
— Didn’t have great college production and played against non Power-5 competition

UAB’s Alex Wright is an interesting body type and though he’s listed at 6’7, he came in a shade above 6’5. He mostly carries his weight well though he has a skinnier lower half. Wright possesses great length with 34 inch arms and uses that length effectively when he keeps his pads down. He can stack and shed and in the pass game, deliver a powerful strike. Wright can make plays in the run game and plays with a good motor to attack the football.

In the first clip on the goal line, he’s the RDE. In the second clip against Georgia, he’s the LOLB and blows up the split-flow block to ruin the run.

Wright uses his length well to try and attack the football while pushing the pocket. He can also get his hands up in throwing lanes, like this game-ending breakup against Marshall. LOLB here.

He’s also versatile, playing RDE and LDE and playing out of a two and three-point stance.

But Wright gets knocked around too much against the run when he plays too tall, especially when he has his hand down. He doesn’t get enough weight on that front hand and doesn’t explode off the snap, popping up too high. Routinely, tight ends controlled him in the run game. LOLB and ROLB in the two clips.

Wright didn’t test but shows tight hips and stiff ankles to try and turn the corner. Not a shock for his frame and size but he struggles to corner. He’s at his best when he can win inside or push the pocket on his bull out of a two-point stance. LOLB in the first clip, ROLB in the second clip.

Wright hasn’t had the cleanest pre-draft process either. He strained his left pec on the bench at the Combine and couldn’t test the rest of the way, though he went through drills. He held off on his Pro Day, having a second Pro Day following UAB’s scheduled workout. And the Steelers were there for that, which caught my attention. But PFN’s Tony Pauline reported Wright did not have a good workout in his positional drills. Here’s what Pauline wrote:

“This was the second pro day for UAB, and it was primarily a workout for pass rusher Alex Wright, who by all accounts looked terrible.

Wright didn’t run at the Combine or during the first UAB Pro Day, and he didn’t run today. His broad jump was 9’3″, and I’m told Wright struggled in position drills. He showed little in the way of explosion and was “outplayed” in drills by teammate Tyree Turner.”

Not a good final impression.

Overall, Wright is an impressive-looking player who uses his length well. Though I understand players declare for all sorts of valid reasons, on tape, he didn’t look like someone who should’ve left school early. He’s an unrefined prospect who needs to show more consistency on tape and his highs aren’t all that impressive. He best fits as a 4-3 DE, ideally a strongside rusher, but he will have to work on coming out of his stance. He also could line up as a 3T and overwhelm smaller guards and centers with his size and length.

Right now, he’s best playing on his feet but he doesn’t move great in space as a stand-up rusher. Reminds me a bit of former Bengals’ DL Will Clarke. Rotational backup type.