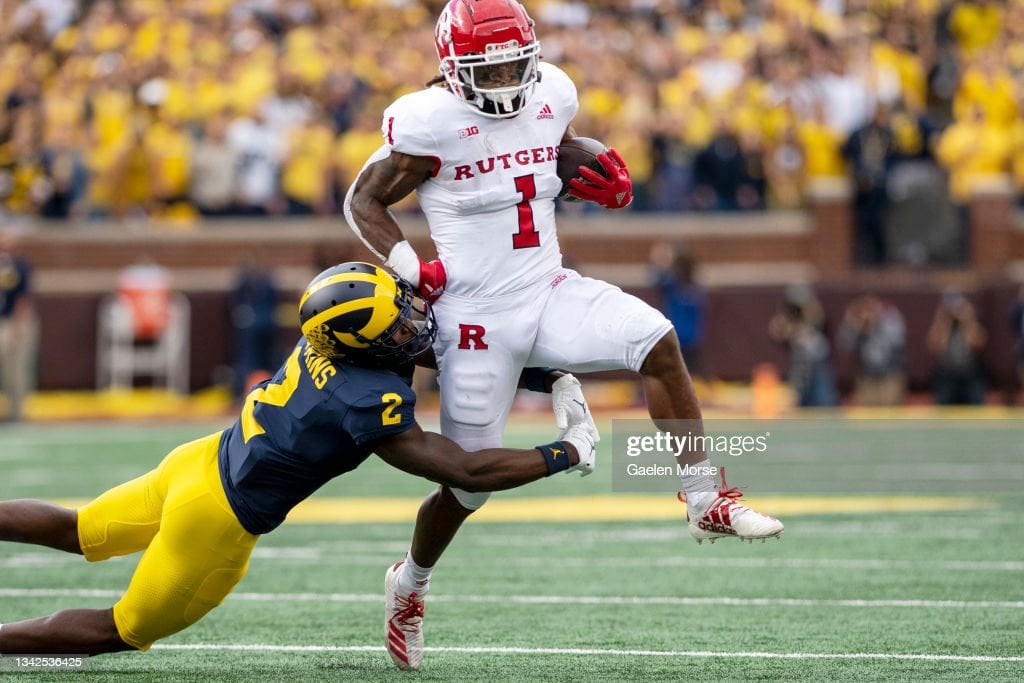 From now until the 2022 NFL Draft takes place, we hope to scout and create profiles for as many prospects as possible, examining their strengths, weaknesses, and what they can bring to an NFL franchise. These players could be potential top 10 picks, all the way down to Day 3 selections and priority undrafted free agents. Today, I’ll be profiling Rutgers RB Isaih Pacheco.

— Compact, well-defined frame will be able to withstand his physical running style
— Strong upper half is able to punish 2nd and 3rd level defenders with stiff arms
— Elite short-area quickness allows him to make quick cuts away from danger, especially in the backfield
— Has acceleration necessary for successful outside runs, has breakaway speed when given the space
— Always moving feet move like beaters of a hand mixer
— Shows ability to consistently run through arm tackles
— Pops right up after big hits
— Good contact balance when tacklers don’t wrap
— Finishes runs strong, with physicality, always seems to fall forward
— Showed nice pass protection understanding and ability, won’t back down from anyone (allowed only one pressure in games watched)
— Soft hands will catch check-downs when needed
— Durable, only missed one game in his career: Cut his foot while removing ankle tape in November 2019

— Urgency in his play is mostly a plus, but can’t prove impatient and not wait for blocks to develop
— Would like to see some timing in his running style to help set up missed tackles
— Will drop some easy passes due to looking upfield first
— Can see him struggling against bull rush against bigger linebackers in pass-protection
— Hasn’t played on special teams since his freshman year at Rutgers
— Averaged only 3.9 yards a carry as a senior, O-Line play was horrid but lacks the ability to create on his own inside the tackles
— Never caught more than 20 balls in a season

— Played in 44 games at Rutgers
— 563 carries, 2,442 rushing yards, 4.3 yards per carry, 18 rushing touchdowns in his career
— 47 catches, 249 receiving yards, 5.3 yards per catch, 1 receiving touchdown in his career
— Finished his career No. 7 on the school’s all-time rushing list
— Led Rutgers in rushing final three years of school
— 2021 Honorable Mention All-Big Ten
— Team Captain in 2021
— Invited to Hula Bowl and East-West Shrine Game
— Four-year starter at quarterback in HS (threw some RB passes at Rutgers)
— His older sister and brother were killed in back-to-back years in 2016 and 2017

Rutgers isn’t your traditional powerhouse Big-Ten school and the program is a far cry from the days of its years the late Big East dominance. However, New Jersey’s only Division 1 FBS football program does churn out some nice pro-level athletes from time to time. This year, Isaih Pacheco is looking to be the next in line. Even though Pacheco led Rutgers in rushing for his final three years in Piscataway, he still remains a relative unknown outside of football circles.

His shining moment came at the 2022 NFL combine with he lit up the stopwatches with a blistering 4.37 40-yard dash. That time was good enough to tie (tied with South Dakota State’s Pierre Strong) as the fastest running back at the entire combine.

Sometimes that speed and burst caught by the stopwatches at pro days and combines aren’t fully shown once you flip on the tape. That’s not the case with Pacheco.

Watch against UMass how, once he’s able to run through the first tackle attempt, he finds himself with a ton of green between the hashes. Both defensive backs have an angle on him…. until they don’t. That truly is all the space

The problem, behind a porous Rutgers offensive line, was that there often wasn’t much space to be found.

He has the ability to strike for a big play anytime he gets the space. Here as a freshman at Rutgers, Pachecho welcomed himself to the Big Ten with an 80-yard touchdown run against a Devin Bush-led Michigan Wolverine defense. Having watched almost exclusively his Junior and Senior year tape, you can tell Pacheco has certainly GAINED speed compared to this run, but he’s still able to finish the run in the end zone.

The other trait that popped off the screen when watching Pachecho was his lateral agility. He oftentimes would use quick lateral cuts to get himself away from danger, especially in the backfield. You can see just how effective it is as defenders are flailing themselves at where he once was. Once he gets to the second and third level, he’s very slippery and loves to finish with power against less physical defensive backs.

To further talk about Pacheco’s power, if you don’t hit him with all you got and square, he’s going to keep his legs moving and chug forward for more yards. He strives and fights for every yard. In all the games and films I’ve watched, I don’t think I’ve seen him fall anywhere but forward on runs.

Pacheco isn’t going to be a huge asset as a pass catcher, but when given the chance he does show soft hands. He did have some drops on some easy passes due to looking upfield before securing the football, however, he is a solid check-down option.

Below, while it’s part of the play design, he’s able to secure the ball, show some wiggle, and explode into the end zone for a touchdown.

The one main negative in Pacheco game comes from his urgency once he gets the football. His reactions are always rapid and fast-paced, as you may have seen in the previous clips. However, this plays against him when running between the tackles. He misses some holes or simply is too quick for blocking to develop and is caught in the wash a lot because of his style of play.

As I mentioned before, there wasn’t a ton of room in general while playing behind Rutgers’ offensive line, so he had to take what was there more often than not. The 3.9 yards per carrying Pacheco averaged as a Senior was puzzling until you see what he was running behind. It does make you question his ability to create on his own though.

Pacheco had a pleasantly surprising amount of pass protection on his tape and carried himself well. He stays square and doesn’t shy away from bigger linebackers. He had some nice reps on film identifying some more exotic blitzes and he always looks for work.

He did have some trouble anchoring against some bigger bull-rushing linebackers as I saw one holding penalty, but for the most part, this is a huge plus to his game.

Pacheco plays with so much heart and always has a chip on his shoulder. He gives 110% on every play. Here against Michigan, he’s giving up roughly 6″ and 50 pounds here, it doesn’t matter to Pacheco. He’s still able to neutralize the defensive lineman (and let him know about it after the fact.)

Pacheco carries out ALL of his fakes 100% too. Often see guys dog these. Watch how effective it is. His fake freezes and completely eliminates three Michigan defenders from the play. The little things matter to him. His effort is one that football coaches dream about.

Overall, Pacheco is a quick-twitch runner who can show off his burst and speed at a flip of a switch. If he’s able to find some space in the NFL, the traits to be a home run hitter are there. Pair that with his ever-running motor and pass-blocking ability I think he’ll be able to stick on an NFL roster. While he hasn’t been on special teams units since his freshman year, his toughness and want-to are perfectly suited for that role to expand as he tries to work his way onto the backend of an NFL roster.

The way he was used on outside runs and his lateral agility reminded me of Jordan Todman’s short stint with the Steelers. Being most effective on outside tosses, outside zone, and stretch plays where they can get into space and show off their burst. However, as I got more into his tape and saw how he finished runs with power and the effort he gave as if there was a constant chip on his shoulder, I couldn’t help but compare his game to that of Phillip Lindsay, but with a more rocked up frame.

If the Steelers are looking to draft a running back for the sixth-straight draft, I’d be banging the table around rounds six or seven if Pacheco is still out there. He’s a guy I want on my football team, not only for his mix of burst and possible change of pace for Najee Harris, but simply because he’s a football player that is going to bring it every time he steps between the white lines.